Conduit Labs is launching a public beta for its Loudcrowd social music game site today in an attempt to create a community that combines social networking with casual game play.

The site is a platform for multiple web-based games, and the Boston company is kicking it off with a party at the South by Southwest conference this week in Austin, Texas.

Conduit is billing Loudcrowd as a place where you can listen to original music from new artists and play a game that lets can express yourself through dance and your taste in music. When you log onto the site, music starts playing. Everyone hears the same song, like with a radio station. You can rate the song and chat about it. 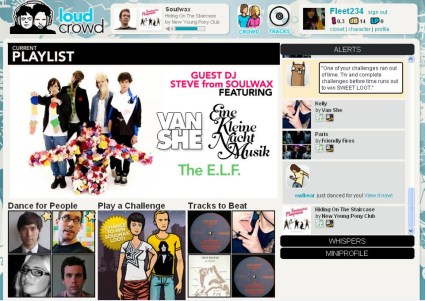 There are two games available on the site right now, with a third launching next month, and more in the works.

In the games, you create an avatar, picking options such as skin color, hair, and gender. The avatar is cartoonish, with enough details to uniquely identify you. You also upload a photo of yourself and link to your Facebook account. You use your real name and real friends in this game, in contrast to many online games. The games are free, but Conduit hopes to make money through the sale of virtual goods.

One game is Dance. If you score high with your dance moves, you earn points that you can use to buy music tracks, other games, or clothes for your avatar. While you’re dancing, others can join you on the dance floor. If they score high enough, then they can meet you via chat. You can choose to make your avatar dance in a way that is flirty, flashy or funny.

It’s a little like Guitar Hero comes to the web. Nabeel Hyatt, chief executive and co-founder, says that games such as Guitar Hero prove consumers don’t mind paying for music when it is part of a cool experience. 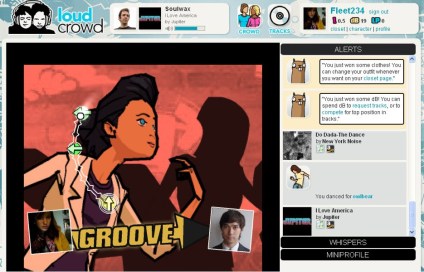 The other game is Spin, where you take on the role of DJ and create your own version of a song. You can capture gems from two spinning vinyl records on a DJ turntable. You can challenge your friends for the best score in the gem-capture game and win the ability to host parties and share music with others. It’s similar to the early version of the site that our writer Dan Kaplan managed to see in a sneak peak last year.

The site currently features more than 50 new artists and has 250 songs — more songs than popular console music games currently ship with. Initial artists include Santigold, Cut Copy, Justice, Spank Rock, and The Twelves who have provided Loudcrowd with exclusively mixed tracks. As those names suggest, this isn’t a top 40 music site.

Conduit Labs was founded in July, 2007, by Hyatt, a serial entrepreneur on his fifth startup, and Dan Ogles. They have 18 employees. The site has been in a closed beta for about four months, and so far 60 percent of the visitors are women, which is typical of casual games. 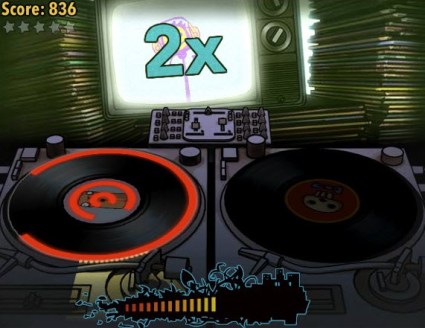 The company has partnerships with indie music labels including DFA, Downtown Records, Domino, the Beggars Group and Modular. The company has raised $5.5 million from Charles River Ventures and Prism VentureWorks. Hyatt was an entrepreneur in residence at Prism, which helped him recruit his management team.

It will be interesting to see if this site catches on with the college crowd and up. Doppelganger failed to draw many fans to its Vside music-oriented virtual world. Competitors are less the music console games and more like Pandora or Lastfm, which focus on building communities around music. Another challenger is Acclaim’s recently unveiled Rockfree game. Hyatt said he expects to raise a new round of money later this year.