The term ‘limited edition’ is tossed about almost too casually these days. Briais’ Out of This World project takes it very seriously.

Briais will produce just 200 copies of the game, priced at €60 ($78) each, and pre-orders have now closed. He currently has no plans to make the game available for sale after this initial run. “We expect about 200 orders and thus will produce 200 units,” he says. 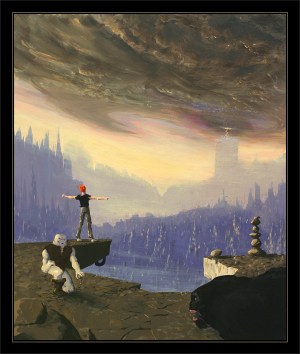 Being a cartridge release, the production process is far more time-consuming and complicated than a CD-based game. “We need time to manufacture the cartridges,” says Briais. “We are about to order all the parts. Then we have to assemble them and program each game individually. This will take time.”

Briais expects to start shipping the first units of the game in June of this year. Boxed, labelled, and packed with a three-language instruction booklet, they will be as close as you can get to an official release.

For Chahi, this is the biggest draw of all. “The most incredible thing is the cartridge edition,” he says. “Manufacturing a cartridge today for hardware that is not produced anymore demands a lot of courage. I have unlimited respect for these developers to do this. I can’t wait to get the physical object in my hand.”

The game itself will be playable with the original graphics in 16 colors or using the 256 colors of the deluxe 15th anniversary edition. It will also feature both normal and speed-run modes, which is unique to this version. “[Eric] enjoyed the speed-run mode a lot,” says Briais.

Briais explains how he utilized the latent power of the Atari Jaguar in his coding. “As a computer scientist, I am quite proud of the technology involved in this version,” he says, “including just-in-time compilation [editor’s note: a method of improving runtime performance], on-the-fly depacking [editor’s note: allowing code to unpack as it loads, which conserves memory], and high-quality sound rendering. I even needed to slow the game down a bit in order for it to be playable.”

The biggest challenge was squeezing the entire game onto a single cartridge. With only 4MB of space available, it was difficult to include all the data needed for the 256-color version of the graphics.

Chahi can closely relate to Briais’ endeavors having single-handedly coded the original game in his garage over 30 years ago. “I felt very close to these people by the way they code passionately,” he says. “Sébastien has a lot of perseverance.”

But have today’s Jaguar retro-programmers got it easy compared to the developers of yesteryear? “It is a bit easier because you can get advantage of today’s tools, compilers, and flash memory cards,” says Chahi. “But, well, the machine is the same, so it is still difficult. Coding in assembly is hard.” 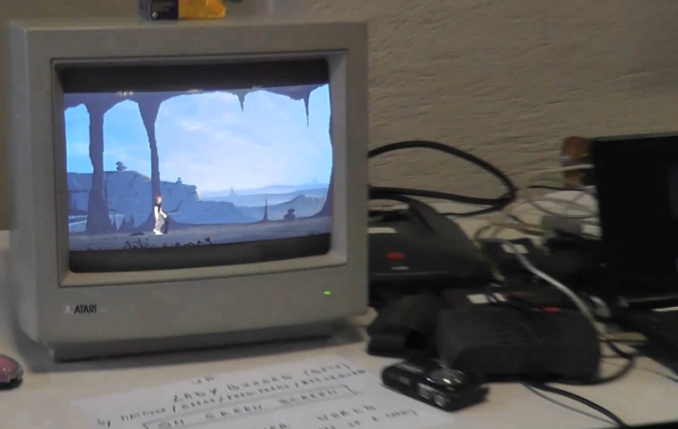 Above: Out of This World in action on the Atari Jaguar. 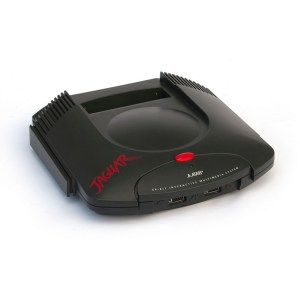 This isn’t Briais’ first foray into Jaguar development. “My first project was a port of Atomic, a simple puzzle game,” he says. “Then I started to write a library to ease game development on the Jaguar. It has been used by a few projects from other developers, such as Frog Feast and Dazed.”

Briais had also started writing a Bomberman clone for the console, which reached an alpha-build stage; however, he aborted the project due to “a lack of time and motivation.”

Releasing new Jaguar games on cartridge has only been made possible very recently. Briais explains it is down to “some friends of mine from the Jagware [online community] team, SCPCD and Zerosquare, who created a new electronic design to build cartridges with modern components.”

Besides Out of This World, the console has seen very few new cartridge releases in recent years. Briais points to 2009 shooter Mad Bodies and 2012 puzzle game Blackout as examples. Both had extremely limited runs.

“I know that some other people are going to release new cartridge games in the future,” says Briais. But he isn’t thinking of anything beyond Out of This World. The game will be the culmination of his eight years of Jaguar development, and it is arguably the most ambitious Jaguar release since the console ceased production in 1995.

So what motivates him to work so hard on developing for a supposedly dead console?

“The answer is simple. For having fun.”

Out of This World screenshots and box art via Removers, console close-up via Ian Muttoo/Flickr, Out of This World gameplay image via Jagware Reboot/YouTube,  Jaguar console image via Easterbilby/Flickr, Eric Chahi portrait via Official DGC/Flickr, and original cover artwork via Eric Chahi.