Since its 1996 debut on the original PlayStation, the Resident Evil series has defined the “survival horror” genre and became the most important franchise for Japanese video game publisher Capcom, while also inspiring a string of novels, comics and movies. Not bad for a game series associated with slow-moving zombies and clumsy controls.

More recent entries and spin-offs upped the tempo and action. Resident Evil: Operation Raccoon City could be the most ambitious offspring so far. It combines the familiar story setting of Resident Evil 2 and 3 with fast-paced online shooter gameplay, pitting four player teams against each other (and plenty of zombies, of course). 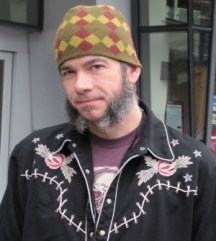 Vancouver-based Slant Six Games’ work on the tactical military shooter franchise SOCOM was a key attraction for Capcom. “Operation Raccoon City needed a degree of realism that was brought to it on the Slant Six side; that impressed the folks at Capcom,” said Slant Six Games Senior Game Designer Ian Christy, in an interview. “Zombies and monsters and all those things are fairly fantastic, so if you have a fairly technical shooter approach to that, then it gives it a bit of grounding.”

We met with Ian Christy after his lecture on working with established IPs during a recent event hosted by the Vancouver Film School. During his 16-year career, begun at Dynamix in Oregon, Christy has been the Lead Level Designer for the Scarface video game and also worked on a Captain America tie-in before joining Slant Six Games as Lead Campaign Designer for Operation Raccoon City. He is also moonlighting as a toy designer for Hong Kong-based company Toy2R.

To get creative sparks out of the constraints of an existing IP, Christy recommends designers to “dig in, explore the cracks and peripherals for inspiration”. For example, focusing on what happened with certain characters between time periods of an established story framework “gives me a whole giant bucket to work with”. 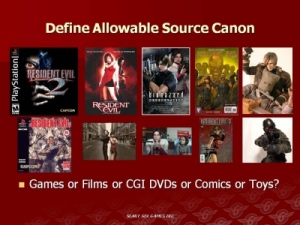 Above: The perils of working with an established IP

Quizzing publisher Capcom early on was crucial for the development of Operation Raccoon City. “Resident Evil has a massive background of stories and their continuities don’t all agree, to phrase it lightly”, says Christy. He eliminated “white noise” by asking Capcom simple questions like whether the canon of the Resident Evil comics could be ignored (it could, to his relief).

The development team at Slant Six Games has several members with personal military experience. Factoring in what a real soldier would do in certain situations guided the design process — to a certain extent: “There are some things in the game that soldiers wouldn’t do, but it makes fans happier – it is expected from [a Resident Evil game]. But a lot of time there’s a nice kind of integrity to the way that a combat group works. If you watch players work together, you can see them move tactically, and that’s what we want to get as an experience.”

The goal for Operation Raccoon City is to “reach new fans without alienating old ones”, explains Christy. However, “there are certain aspects of the typical Resident Evil games that we don’t do because they don’t fit with the gameplay genre we’re approaching. If you have four live humans playing, it doesn’t make sense to have massive inventory systems. It does in an RPG setting where the game moves slower. But with the amount of stuff that we’re throwing at you and the speed of things, it needs to be much more efficient than that.” To maintain the essential feel of the franchise, Christy and his team are doing “little things like using the iconic herbs as healing items”. Raccoon City also makes use of the series’ key characters and established monsters and is giving them more exposure in the narrative. 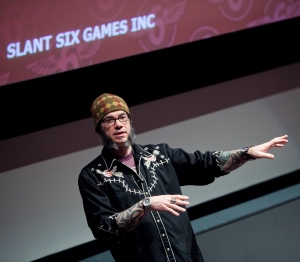 Above: Ian Christy lecturing in Vancouver

Asked if his team has looked at Valve’s Left4Dead as one the benchmark games in the genre, Christy replied: “Well, it’s impossible not to because it’s a four person co-op zombie game. So there’s no way around it.” He is quick to point out differences: “[In Operation Raccoon City] it’s not four survivors; it’s a trained military unit with a job to do in an environment that’s hostile. So that changes how we approach a lot of our design decisions. Left4Dead is very much about ‘can we stay alive and get to a rendezvous point?’ And while there are moments in a military situation where you have to evac, the majority of time we’re trying to do something else. And I think that shifts how you approach the missions and what’s going on. It definitely had an influence on our mechanics choices.”

Christy added that Slant Six Games also looked at other tactical shooters as well as “the experience the studio has with SOCOM and some of the other combat games we’ve done. Presentation-wise, we’re looking at some of the industry leaders, like Gears of War or Call of Duty, and the way they lead players forward in an environment that otherwise could be potentially very confusing. Anyone working in this space is looking at those exact same benchmarks.” He stresses that “the trick is not to look at them so that you can emulate them or copy their systems,” but rather learn what conventions players are used to in a specific genre: “This is the button that players are going to expect that’s going to do a particular function on this platform.”

Talking about the experience of working in a Canadian development studio with a Japanese publisher, Ian Christy emphasizes the importance of communication: “It’s been really awesome working with Capcom. We talk to them regularly, through email and video-conferences. Conversation is huge, so I love the fact that we’re communicating constantly. And it’s not like they are riding shotgun to tell us what to do. They’ve given us a lot of room to work with and do the right thing.”

Resident Evil: Raccoon City is due for release on March 20, 2012 for PlayStation 3 and Xbox 360, followed by a Windows PC version on May 18.