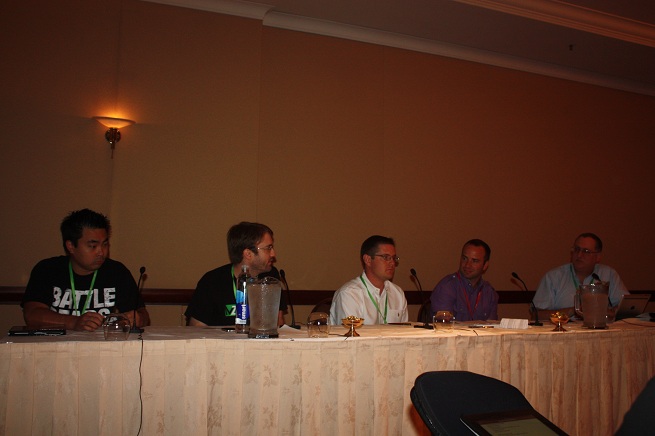 It’s a little scary to be an iPhone developer when you hear about the rising cost of acquiring new users through marketing programs. For much of this year, the distribution channels of mobile games (the traditional means for marketing apps to consumers) have been sold out. That’s causing the cost of marketing through these channels to rise.

That’s in turn is forcing smaller developers such as Ben Vu, the founder of Omaha, Neb.-based SkyVu Entertainment, to spend a lot of their time finding inexpensive ways around the rising cost of user acquisition on iOS. On a panel at our GamesBeat 2012 event, Vu said he was talking to fellow panelist Gabe Leydon, the chief executive of app maker Machine Zone, about the problem.

“I was freaking out,” Vu said.

The problem is tough for makers of free-to-play games, where users download an app for free and purchase virtual goods with real money. If the lifetime value generated by these games is small, then the cost of acquiring new users could very well surpass the amount that developers reap in revenues from users. (That’s not a good thing).

“This mismatch is insane,” Vu said.

Leydon said he has seen the cost of acquiring a user rise from 50 cents at the start of the year to as high as $7 on some occasions. Average rates for acquiring users are statistically lower than that, according to mobile app marketer Fiksu, but there’s no question the trend is making life hard on everyone. For small developers, you have to “do whatever it takes” to get noticed, said Vu, whose company makes the popular Battle Bears game and has 60 million downloads to date.

So far, that means cross-promoting new games by leveraging the audience for existing games and engaging with other developers who are willing to trade the eyeballs for their games for the eyeballs for SkyVu’s games. Launching these cross-promotions are something that Vu himself deals with on a weekly basis. (In fact, it’s why he showed up late to the panel). Chartboost does this in a formal way.

“You have to pay attention to this, down to the hour or the minute,” Vu said.

Steve Peterson, a writer for GamesIndustry International and the moderator of the panel, asked if this was a “catastrophic situation” for game developers on Apple.

A.J. Yeakel, a mobile consultant and former user acquisition expert at Zynga, said he believes the market will see a correction as prices for marketing services eventually drop, because they are unsustainably high now. But Leydon disagreed. He sees lots of “billionaires” coming into the mobile games market that want to promote their branded games at all costs, even if it means they lose money in the beginning. Big Chinese game companies haven’t even entered the market yet.

“The pressure on prices will shoot upward and not slow down until more ad inventory comes online,” Leydon said. “There’s billionaires in the market who want to win. They are willing to spend $7 a download. This is going to be a long, tough fight.”

The good thing is that there is a surplus of inventory on Android smartphones, and this problem doesn’t exist on that platform.

Rob Weber, the cofounder of app marketing and monetization firm W3i, said it is hard to figure out where the top of the market will be in terms of user acquisition costs.

“You can’t predict how the bigger companies will spend,” he said. “But it’s about finding the right volume and the right level of profitability for a game and doing it on a large scale. It’s a huge, full-time job.”

Leydon said that nothing helps reduce the cost of user acquisition like a great game, which will often spread quickly through word of mouth. But even the best and most popular games only hold the top spots of the App Store charts for a matter of weeks. After that, you need a user acquisition strategy to keep the rankings high, Yeakel said.

Leydon said developers have to seek out as many partners as possible to lower their acquisition costs. One of the things that should help reduce costs is the deep integration of Facebook into the App Store, since “like” buttons on apps will help them spread without marketing costs. Twitter has also helped in this respect.

Certain types of games also have a longer life and higher lifetime value, such as Machine Zone’s role-playing games, Leydon said. Weber suggested that Machine Zone launch more casual games, which could snare many more users and feed them into the role-playing games that make more money. Having better social networking promotion would help, too.

“I wish I had that all day long,” Leydon said.

Yeakel said that Mark Pincus, the chief executive of Zynga, makes major point when he brings up a user’s “active social network,” an indicator that counts the number of friends who are actively playing the same game as they are. The higher the number, the more likely the user will stay in the game and spend money in it.

Leydon said he was a fan of a new user acquisition tool from Hook Mobile that searches through a user’s contact list on a phone and finds out which of those users has an iPhone. Rather than spamming everyone on the contact list, the Hook Media solution allows a developer to target known iPhone users.

That’s cool, but Apple has indicated that the unique device identification numbers (UDID) will be phased out over time, making this no longer a valid way to target users. That could make life even more difficult for developers, and no single prevailing solution is in place yet to replace the UDID.

Better branding can help an app stand out and get more users naturally, Vu said. So his company is engaged in licensing the Battle Bears franchise for a possible TV show and line of toys.

“We are working on the core product and the core brand and making it freakin’ awesome,” Vu said.

Apple could affect the state of user acquisition costs on the platform by making changes to it. It acquired Chomp, an app search entity, that could be integrated into the App Store. If it becomes a lot easier to search for the right app, then that will help apps get noticed and lower the cost of acquiring new users. But for now, there is no solution in sight.