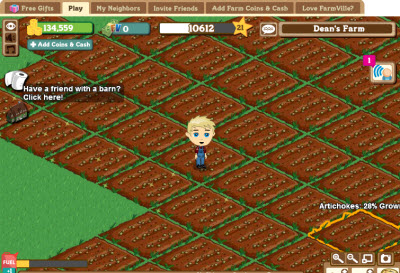 Zynga is the darling of social games, but it’s hard to believe that the maker of Facebook apps and websites is worth $5 billion, as estimated by SecondShares.com. That research firm, run by a group of former equity analysts, estimates the value of private companies and what they would be worth if they were actually public.

While Zynga has no near-term plans to go public, the analysts say they can surmise its value based on a variety of measures, such as the price that employees and investors are getting by selling shares on the secondary market. There is a lot of black art to this kind of evaluation, and the high value for Zynga is likely to stir a lot of debate.

For a veteran who saw the dotcom madness of the late 1990s, it’s hard to watch this from the sidelines without cringing. Yet there are differences between a company like Zynga, which is profitable, and mail-order pet-food supplier Pets.com, which had no hope of being a moneymaker. But there is a gold-rush mentality in social gaming. You can imagine that executives at Microsoft, Google, and Facebook would look at this report and conclude, “Oh dear, we have to buy them now or else they’re going to get even more expensive.” Crazy valuations have a way of inspiring even crazier behavior.

My guess is that the top folks at Zynga don’t like some of this speculation about Zynga’s imaginary public value. They, of course, stand to get rich at some point from Zynga’s high valuation. But they don’t want to be overhyped and then fail to meet expectations. Getting a valuation like this is kind of a jinx. Mark Pincus, Zynga’s chief executive, said as much after his company was profiled in Fortune magazine. Tonight, Pincus offered no comment when asked about the estimate via email.

Still, the report gives us interesting fodder for a discussion. Zynga has a lot of momentum, and that may justify its valuation to some. When Electronic Arts bought Facebook game publisher Playfish, which was then the No. 2 company behind Zynga, for as much as $400 million in November, people thought it was crazy. EA valued Playfish, whose annual revenues were running at an estimated $50 million, at eight times revenues for 2009. Since Zynga is the market leader, its estimated value is higher at 9.5 times 2010 revenues, going by the SecondShares valuation. If it were public, the report says Zynga would trade at $5 billion, or $15.75 a share, about 75 percent above where it trades in the illiquid private secondary market.

Zynga has 241 million monthly active users for its games on Facebook, according to AppData. That is about 50 percent of the market share among the top 10 game publishers on Facebook. That’s good news and bad news: It means Zynga is highly dependent on traffic from Facebook. 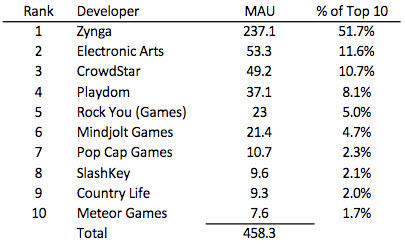 The San Francisco company makes its money through sales of virtual goods in otherwise free games on Facebook and other social networks. Zynga has five of the top 10 games on Facebook, including the No. 1 game, FarmVille, which has 83 million monthly active users. That is key to locking in Zynga’s market position because it can cross sell its newest games to its existing customers at no cost; rivals who don’t have hits can’t do that so easily. Zynga also generates so much profit from its games that it can afford to advertise them heavily, helping it to reach larger and larger audiences. And even if rivals come up with better games, Zynga has proven it can clone those rival games in a matter of weeks and wind up with larger audiences than the original games of the rivals, as was shown with FarmVille’s triumph over the rival FarmTown.

Before Zynga came along, an online game with a million monthly users was considered pretty successful. But Zynga doesn’t earn nearly as much per user as paid online games, such as World of Warcraft, which charges $15 a month. SecondShares says that online game firms earn about $5 per paying monthly average user in China, but Zynga is earning about $2.25 per paying month average user, since the U.S. online market is less mature.

That suggests that revenue for Zynga was $300 million in 2009 and it will likely surpass $500 million in 2010, SecondShares estimates. By 2012, Zynga could generate more than $1 billion in revenue in 2012. The company is also very profitable with estimated earnings before income taxes, depreciation, and amortization (EBITDA, a common measure of profitability before various accounting adjustments are applied) of $170 million for 2010. That is a big number, even though the company is hiring at a fast clip and has more than 800 employees. By 2015, SecondShares estimates that the good times will just keep rolling, with revenue of $1.6 billion and earnings before interest, tax, depreciation and amortization — a measure of operating profitability — of $650 million.

This analysis comes down to one bet. Zynga is growing fast and it will continue to do so, and its momentum will generate lots of cash that it needs to stay ahead of its rivals, buy talented game developers and commission new games. The valuation puts Zynga in the league of other fast-growth, highly valued companies such as Twitter, Facebook, and China’s Tencent. Since we are very early in the social gaming boom, there has to be more upside, SecondShares says. Zynga, for instance, can grow fast on other platforms beyond Facebook; it already has about 15 million monthly users on FarmVille.com, according to Compete.com, and it is moving its games to MySpace and MSN Games.

There is also upside potential because Zynga will likely be able to grow the amount of revenue per user. It can do so as it embraces alternative ways to pay for virtual goods, such as offers, or prepaid cards. Those alternatives reduce the friction for people who don’t necessarily want to use credit cards to buy goods online. By 2015, SecondShares estimates Zynga can grow its revenue per monthy average user to $3.50 a share from $2.25 a share. At that point, Zynga will be worth an estimated $10 billion, according to SecondShares.

Now we come to the risks. Zynga is very dependent on FarmVille, which is 35 percent of its monthly users and 50 percent of Zynga’s estimated revenue. But FarmVille seems to have peaked in popularity and Zynga is contemplating how to evolve the game. Also, Facebook’s decision to eliminate “notifications” in its newsfeed deleted a major sources of free ads, SecondShares said. Many people viewed these notifications as spam. Now, game companies may have to spend more money on ads, which will shift profits from the likes of Zynga to Facebook, which sells the ads. In addition, four of Zynga’s six major hits appear to be in decline, SecondShares said.

Facebook has 400 million users but could see its own growth slow, posing a risk to Zynga. Facebook is also making moves that could cut into Zynga’s profits. Facebook recently introduced Facebook Credits, a payment system that imposes a 30 percent fee on purchase of virtual goods made with Facebook Credits. This is why Zynga is moving beyond Facebook, but it may encounter a lot of competition on other platforms.

Much of SecondShares’ assessment of risks revolves around the idea that what goes up, must come down. It’s hard to imagine that Zynga will have a lock on creativity and all of the other things required for success, particularly as all sorts of rivals chase its success. Those rivals include everyone from Crowdstar to Electronic Arts.

The analysis is interesting, but it is built on a lot of assumptions that may or may not be on solid ground. Back in February, analyst firm Next Up estimated Zynga was worth just $3 billion. Is it time to join the social game gold rush and get out our picks and shovels? Do you think Zynga is worth $5 billion? Please take our poll.

Is Zynga worth $5 billion?online surveys