When you play the Wrecking Zone multiplayer mode of Crackdown 3, you’ll notice how completely destructible the environment is. You can shoot out the bottom of a skyscraper with rockets and bring the entire building down. Of course, while you’re doing that, someone else in the four-versus-four battle will probably take you out.

I played a preview of the third-person action platformer game coming from Microsoft and Sumo Digital. I played terribly at multiplayer, but Joe Staten, creative director at Microsoft Studios, was kind enough not to laugh at me. Staten, who was one of the original creators of Halo at Bungie, joined the Crackdown project in 2014 and helped bring it home.

The original creators left the project and Microsoft abandoned the previous launch date of 2016, but now the game is complete and full of bombastic gameplay from the likes of characters like a digital version of Terry Crews.

Crackdown 3 is a follow up to 2010’s Crackdown 2 and 2007’s Crackdown. Part of what took so long was the ambition to add cloud processing to the game. The multiplayer zone has complete destructibility because the player’s machine can reach out on the cloud and tap Microsoft’s Azure technology, allowing a single machine to use the resources of many. That took a while to accomplish, Staten said in our interview.

The game comes with a 15-hour-plus single-player campaign where you get to play as an agent in the open world of New Providence, a neon-lit city controlled by the mysterious organization Terra Nova. One by one, you take down the crime bosses of the city and solve its mystery. You can play one of 21 different agents, and switch between them at any time you come across supply points in the city.

We also talked about why it took so long to finish the Microsoft exclusive for the Windows PC and Xbox One. More than four years after Microsoft showed off the first gameplay from Crackdown 3, the game debuts on February 15. 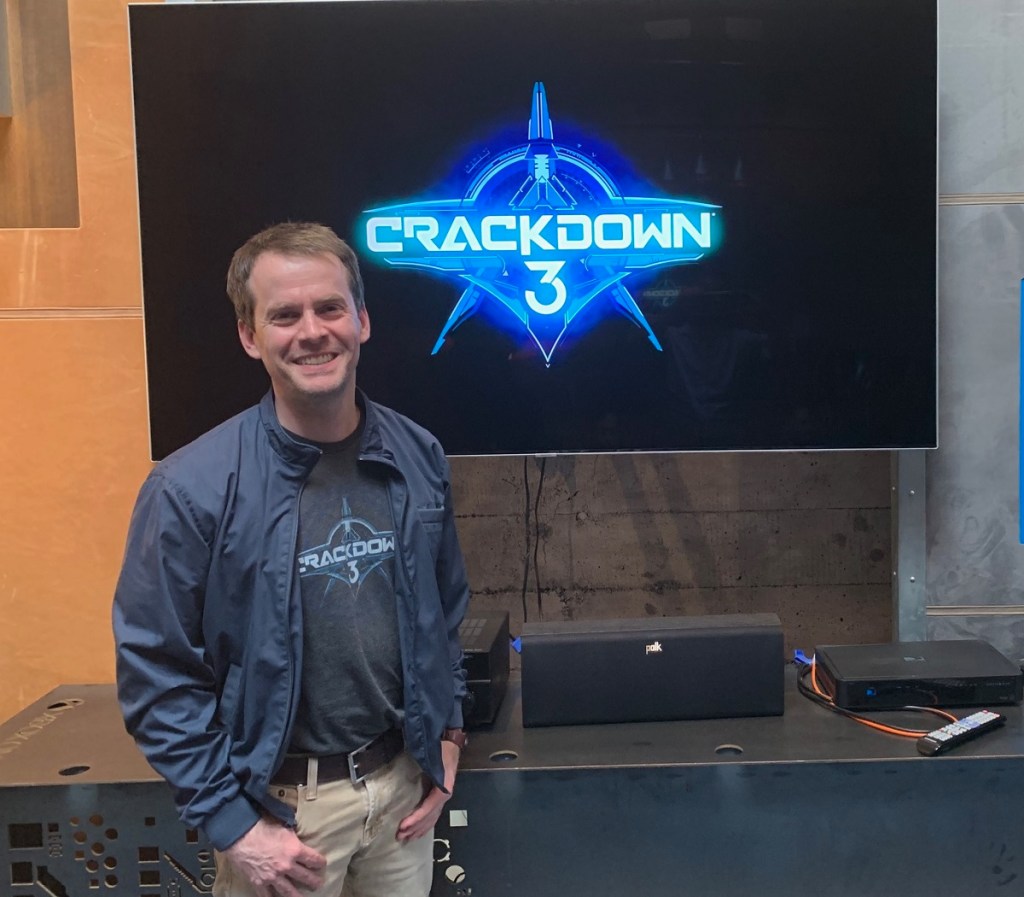 Above: Joe Staten, creative director at Microsoft Studios on Crackdown 3.

Joe Staten: Well, I went to publishing in 2014, right as this game was announced, the early days. I was somewhat involved. Publishing is either a light touch or a heavy one depending on the partner. I definitely got more involved in the last year, just as we’ve been moving toward lockdown and launching the game. I’ve spent more than 50 percent of my workday on this game.

GamesBeat: What’s been your role?

Staten: What I do in publishing now is I head up the design group. I work with other talented designers, overseeing all the projects from a design point of view. But in Crackdown’s case I’m serving as, really, creative director for the whole game. I’m not living in Sheffield working for the Sumo guys, but I’m serving in that job of trying to bring the game together cohesively, and also working with our marketing partners to promote the game. Standard creative director work at the end. And I do bug triage every morning, five or six days a week, three hours. Trying to really shut this game down.

Staten: Over the years I’ve had to take on more stuff. But I always do have that same perspective, that background. I can’t get away from it.

GamesBeat: What’s the context where you think this fits, the kind of genre it fills?

Staten: I’d call this an action platformer, a third-person action platformer. An open world, of course. I think it has some similarities to a lot of other open world games. In an interesting way, I think it has a bit of kinship with Breath of the Wild, the latest Zelda, inasmuch as from the moment you start Crackdown’s campaign, the whole world is open to you. If you want to go right after the central tower, right after the main bad guy, there’s no linear story that stops you from doing that.

The game design is always just waiting in the background, watching what you do, encouraging you to do more of what you love. It feels like a modern open world game, but it still has this classic Crackdown pulpy sandbox of fun that doesn’t take itself too seriously. By the end, five or 10 hours in, hopefully you end up feeling like a superheroic agent of justice ripped out of a comic book. That’s really the goal, to make the best Crackdown game ever. 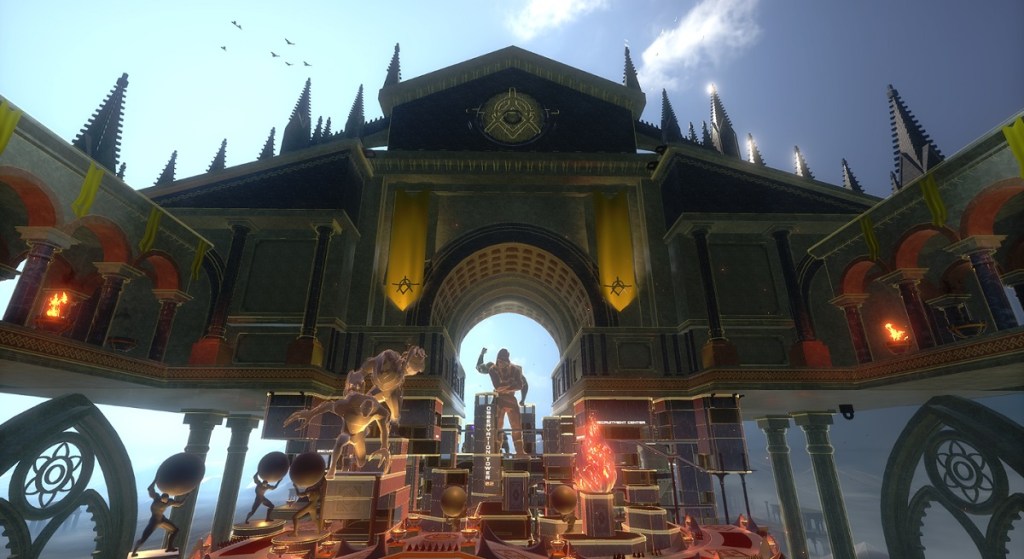 Above: Ready to enter the Wrecking Zone?

GamesBeat: Is the campaign there to inspire you to play for a long time, to keep you in it?

Staten: It’ll certainly train you in how to play the game. It’ll get your skills sharp enough to be competitive in multiplayer. It’ll also just give you fictional context for the world, that kind of thing. The way I look at it these days, the reason you put a campaign in any game is because players are different. Depending on the day, everyone has a different mood. Some days I feel like being super social. Sometimes I feel like not talking to anybody. Some days I feel really cooperative. Some days I’m super competitive. I think the more games can satisfy all of those different player moods, the more successful they’re going to be.

Crackdown has a decent menu. Bigger than some, not as big as others. If you want to play by yourself or with a close friend, if you just want to have a relaxing story experience, great. We have this really cool 15-hour-plus campaign. If you’re in a mood to bash in people’s teeth, be super competitive, we have that mode for you as well. You don’t need to actually bash anyone’s teeth, but you know what I mean. That’s the reason we have the campaign. We want to make sure that when millions of people jump into this game in Game Pass and they think, “Well, how do I want to play Crackdown? I’m not really a multiplayer person. Does it have something I can play by myself?”, yep, we do. Hopefully they’ll fall in love with Crackdown that way, and other ways as well.

GamesBeat: The variety of player characters, what would you say about the breadth you have there to choose from? For multiplayer or the campaign.

Staten: We have 21 agents to choose from, 10 women and 11 men, one of whom is Terry Crews. We originally just had 10 men, but Terry showed up and we had to put him in the game, because he’s awesome. There are vanity differences, appearance differences that go along with that, and a nice mix of ethnicities. But the cool thing we’re adding for Crackdown 3 is, every agent comes with a unique set of skill leveling bonuses. One agent might be better at leveling driving skill and explosives skill, while another might be really good with firearms and agility.

Because you can switch the agent character you’re playing at any time during the game at the supply points, our checkpoints–the game fiction has this idea that when you die, you’re regenerated in a new body. It’s really easy fictionally to slip between different agents. If you feel like min-maxing the system and really power leveling on strength, you’ll want to pick an agent that’s great at strength. You can always swap to another agent at any time. Again, it’s just this Crackdown philosophy of, how do you want to play? The game is going to let you do that even better. If you do well, we’ll reward you and hopefully keep you playing.