I dig alternate history stories, but I’m not always a fan of time-travel tales. It can get confusing, and often, time travel becomes either a crutch or a MacGuffin that writers lean on.

Cris Tales involves time travel, and it’s a clever use of the trope. Combined with a beautiful, papercraft world, this tribute to Japanese RPG shows that the teams of Dreams Uncorporated and Syck (a pair of indie studios from Colombia) have some big ideas and know how to execute on them. It’s publisher is Modus, the indie label for Maximum Games.

You adventure as Crisbell the Time Mage. She can move foes backward or forward in time. You explore a world with the requisite evil foes, but you also encounter folks living in towns that are suffering, and learning about their stories and fixing their woes may become your chief motivation.

Cris Tales is out now for PC, PlayStation and Xbox, and Switch, the platform I reviewed. More on that later.

The hallmark mechanic for Cris Tales is how Crisbell manipulates time. She can push foes into the future and throw them into the past. Outside combat, she can help her talking frog friend, Matias, hop both to the past and future to engage with people and their surroundings.

Matias is my favorite character. He’s a jolly ol’ frog, sporting a smiling face festooned with dimples and a posh top hat. He’s cheerful and always ready to help. I love how he can move into the past or the future and help you figure out what’s going on in towns and other locations. In the second town you visit, he helps you find items in the past to solve a problem in the present … after he’s hopped into the bleak future, showing you a dilemma to stop back in your time.

Cris Tales is a homage to Japanese RPGs, and it would’ve been easy for Dreams Uncorporated and Syck to model a frog character after Chrono Trigger’s amphibious knight. But the studios didn’t, and the result is a a charming character I’d take along on any adventure.

In combat, time manipulation is about maximizing your abilities and your foes weaknesses. Christopher is a warrior and one of your friends, and he has a water attack. He can make something wet in the present, and when Crisbell throws that target into the future, it rusts, making it weaker. A fellow time mage, Wilhelm also uses plant-like magic to poison and heal. You can have him throw a poison seed into the past, then Crisbell can pull that foe into the future, poisoning them. Another tactic Crisbell has is sending more mature monsters into the past, making them younger and weaker.

Now, Crisbell does have limited uses of her time magic, so you want to consider whether or not you need its help before using it.

My favorite aspect of Cris Tales so far are the people you encounter in the world and their stories. Some folks are suffering from rising water in one town, while the richer folks are living high-and-dry above them. And early quest has you helping a family save their room from a rotten future fate.

When folks lament the state of JRPGs these day, they often cite the towns you can’t visit, as you once could in past games. Now, let’s be honest — the people living in those towns often didn’t have much to say, and if they did, it certainly didn’t often give your character any agency over what was going on in that community. That’s not the case with Cris Tales, so when traveling in towns, shift Matias into the past and future to learn more of what’s going on, and make time to talk to a city’s inhabitants. You’ll enjoy it.

Solid-state drives have spoiled me. I dig the fast loading times I have on my PC, my PlayStation 5, and my Xbox Series S. As someone who plays a lot of RPGs and strategy games, SSDs are my friend.

So I got annoyed at the long loading times before scenes and battles in Cris Tales, about 8 seconds-to-10 seconds. Now, many of you may not mind this, but I did. And since Cris Tales has random battles, waiting through these load times got annoying quick. The load times were half this on the Epic Games Store version on PC, but that’s with a SSD. 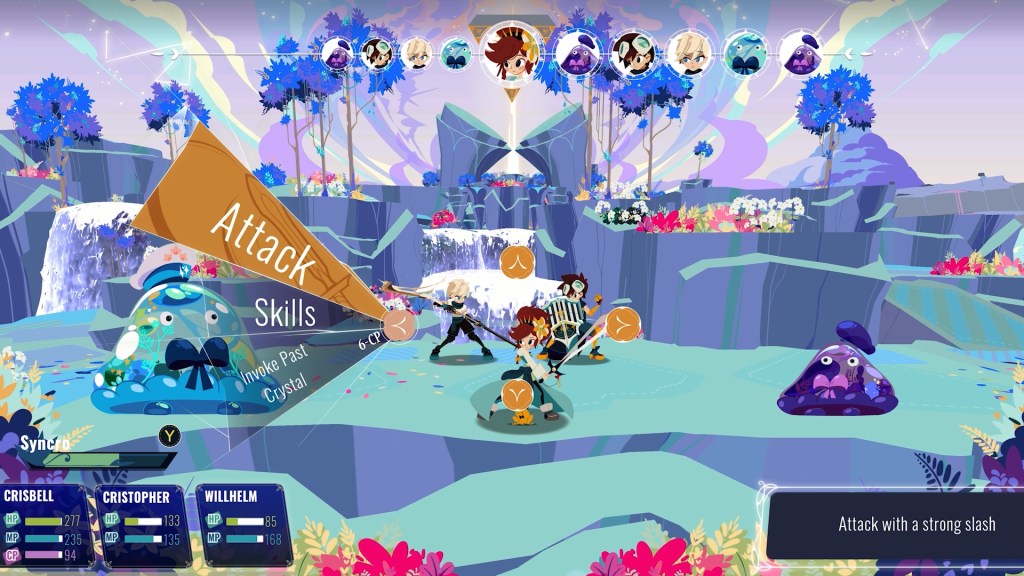 Above: These slimes are so cute. I want to hug ’em.

I’m impressed with Dreams Uncorporated and Syck’s maiden effort. Cris Tales charming RPG, full of color, interesting colors, and life, and I’ve enjoyed my time with it so far. Some of the monster designs are A+ as well, such as the Slimes. They are transparent, with little sea scenes inside them, and they were Donald Duck-like sailor outfits. Their bow ties also look like little mustaches. They’re cute as heck, a great example of the game’s art design.

I’m looking forward to finishing what looks like an indie gem and a top-1o RPG for 2020.

But I may be finishing on PC, as I’m fed up with the Switch load times. Nintendo needs to refresh the Switch with an SSD, and soon, otherwise more third-party games may suffer from its aging shortcomings.

Update, 1:33 p.m. Pacific on August 27: I’ve finished, and my own main critique of this delightful game is its slowness on Switch. I’ve now scored it.

Cris Tales is out now on PC, PlayStation and Xbox consoles, and Switch. The publisher sent GamesBeat an eShop Switch code for the purposes of this review.