A crowd of gamers are once again targeting outspoken critic Anita Sarkeesian with death threats.

Earlier this week, Sarkeesian posted the latest video in her Feminist Frequency “Tropes vs. Women” series that takes a critical look at the portrayal of women in gaming. As with previous Feminist Frequency videos, this one sparked an immediate reaction from a group that finds Sarkeesian threatening. As part of what looks like a targeted campaign against the critic, this reignited group is pummeling Sarkeesian’s social media feeds with harassing comments and threats of violence.

The worst online attack came from a Twitter user that made a new account specifically to threaten Sarkeesian. She noted that she was taking this particular threat more seriously because it contained her personal information. In response, Sarkeesian says she contacted law enforcement and is staying with friends.

Be warned, the following image is likely not suitable for a workplace environment: 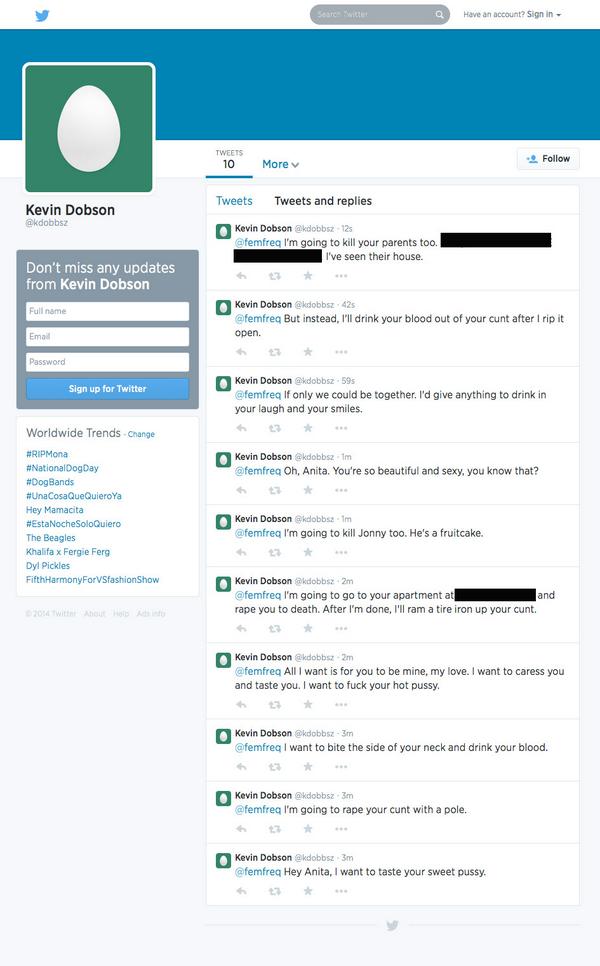 In her latest videos, Sarkeesian is taking a deep look at the idea that game developers use women as background decorations or plot points to make a narrative appear more edgy or important.

You can watch it for yourself below:

While mobs of angry gamers have targeted Sarkeesian since even before she started her Kickstarter project to fund Feminist Frequency, the renewed hate against her seems like it is primarily pouring out of a single source. Many of Feminist Frequency’s harassers reference a video from YouTube personality Thunderfoot when they send their attacks to her.

“Go ahead, screen capture this and tweet it you piece of shit” ummm… ok. I’m not afraid of strawman "rebuttals". pic.twitter.com/8B74uYJOOU

Nearly a month ago, following the release of a previous Feminist Frequency video, Thunderfoot posted a video called “Anita Sarkeesian – Busted.” In the clip, the video blogger highlights a portion of Sarkeesian’s video about Hitman: Absolution where she potentially misrepresents the game. She claims that developers encourage players in that game to punch and abuse a pair of women working in a strip club because they are nothing more than background decorations. Thunderfoot demonstrates how players are actually punished by the game for attacking civilians, which would seem to undermine her point that players are encouraged to attack the women characters.

But Thunderfoot does not frame Sarkeesian’s representation of Hitman: Absolution as a factual discrepancy or potential mistake. Instead, he asserts without doubt that she is willfully lying, and he even goes so far as to use this as evidence that gaming has no issues with the representation of women in games. Emboldened by this and other videos, Sarkeesian’s harassers have once again forced her to fear for her safety.