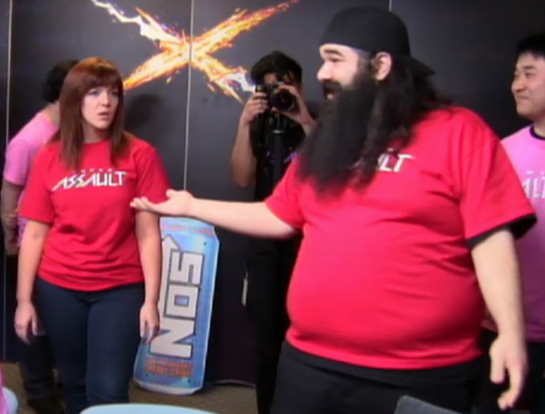 Those words came from the mouth of Street Fighter X Tekken tournament participant Aris Bakhtanians  on day five of Cross Assault, the Capcom sponsored reality show streamed on IGN. This absurd but telling statement came in response to a call for civility from Jared Rea, community manager of streaming host Twitch.tv.

Bakhtanians proceeded to equate an FGC (fighting game community) without sexual harassment to using a football in the NBA.

This display resulted from events beginning on day one of the tournament. Bakhtanians, captain of Team Tekken, spent a good thirteen minutes of the stream harassing lone female team member Miranda “Super__Yan” Pakozdi. The video below, from Destructoid, captures Pakozdi, surrounded by men, attempting to laugh off an unending stream of abuse until she can no longer endure it.

When Bakhtanians invades Pakozdi’s personal space near the end of the clip, she retreats from the room

Giant Bomb obtained a screen capture of tweets from Pakozdi (@Super__Yan) including one relating her distress at Capcom’s apparent apathy. This particular tweet longer appears on her feed. She has also suggested in her tweets that additional inappropriate behavior occurred off-stream.

On day six, after a clearly disinterested performance, Pakozdi forfeited. Tournament boss Matt Dahlgren of Capcom-Unity provided an on-screen apology shortly afterward. Pakozdi has since indicated via Twitter that Capcom handled the process appropriately while expressing concern as to how she's percieved. She also explained that she was not comfortable enough with the hostile atmosphere to return for the final round.

I may have come off as a huge douchebag but I don't regret my decision one bit. I also think Capcom handled it well.

@TevinTaLbAiN the reason why I'm not attending final round is cuz I don't think I would be comfortable anymore in that environment.

She has repeatedly and vehemently cited her initial agreement with Capcom not to entertain requests for interviews. Neither she nor Bakhtanians has responded to press requests for comment.

Predictably, the by-default-misogynistic echo chamber of certain parts of the FGC has generated some blowback for Pakozdi, essentially accusing her of “asking for it”:

Other parts of the community have decried Bakhtanians's actions. On her blog, Nonsense Machine, FGC member Emily Chow offers her support and relates her own experiences with the petrifying dicomfort of sexual harassment. She corroborates Pakozdi's stance that attemping to defuse anxiety with laughter does not imply consent to the offending behavior.

Unfortunately for all of us, none of this occurred in a vacuum. In the video game community at large, the FGC does not have a monopoly on casual misogyny. Just ask Jennifer Hepler. The issue keeps coming up because we have not laid it to rest and likely won’t for some time. The cultural momentum of insular communities ensures they change at a glacial pace.

That said, we’ll never see improvements without discussion. Miranda Pakozdi’s harrowing trial has certainly sparked one. Hopefully, it will gain a high enough profile to lead to something positive rather than getting the customary brush off.

For its part, Capcom has responded to all press inquiries with the following statement:

“The views and opinions expressed by cast members in the live internet program 'Cross Assault' do not reflect those of Capcom. As a company, Capcom believes that everyone should be treated with respect. This particular issue was brought to our attention and has been addressed. We sincerely apologize to anyone that was offended by any comments expressed during the show.”