CrowdStar has built its reputation on Facebook by making casual games that appeal to females, from Happy Aquarium to It Girl. But the company is trying a tack today with the launch of its first hardcore strategy game, Wasteland Empires.

The game is available now as a beta test on Facebook. The social network has hundreds of millions of largely female casual gamers, but game publishers are recognizing that the Facebook also has plenty of hardcore gaming fans who are an under-served demographic on the social network.

In targeting hardcore gamers, Burlingame, Calif.-based CrowdStar joins battle with Kabam and Kixeye, which have both carved out a niche by creating games that appeal to gamers who normally like console entertainment.

Wasteland Empires takes place in a post-apocalyptic world where the player controls bands of nomads. The gamer has to direct the nomads as they fight for survival by building villages and fighting rivals. This kind of setting is typical in recent hardcore games and is reminiscent of Fallout 3 and Rage.

The game isn’t to surprise to me in one sense. Jeffrey Tseng, co-founder of CrowdStar, had his roots in hardcore console games. He worked for Sega and his own independent hardcore game studio, Secret Level. While CrowdStar has been making casual games since its founding in 2007, Tseng has probably been waiting for this day when he could return to hardcore gaming.

The game focuses on high-quality graphics and advanced character interactions, but it is aimed at social gamers, rather than loners. The Information Study Group recently reported that more console gamers are now playing on Facebook, and these hardcore social gamers play for longer periods of time than other social gamers. CrowdStar build Wasteland Empires to target these young male gamers.

The game has good music and voice acting. But it’s not like a console action game or role-playing game in that it has a lot of still images where characters convey the story to you in text. You start out building a defensive perimeter around your village and get attacked by enemies that move across the screen, until your towers nail them. The game isn’t particularly fast moving, like most Facebook games. When you attack your rivals, your soldiers move across the enemy’s camp, taking out one building at a time, sort of like with StarCraft, but at a slower pace. In this respect, the game is like Kabam’s Edgeworld or Kixeye’s Backyard Monsters or War Commander. There are some quite satisfying sounds when you take down an enemy building. The building element of the game resemble’s Civilization World on Facebook. 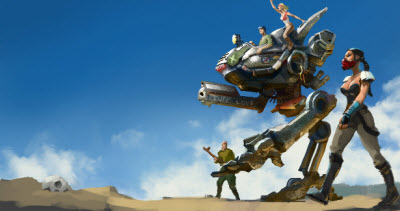 CrowdStar’s It Girl is aimed at fans of popularity contests while Top Girl is a simulation of a model’s life on mobile phones. CrowdStar is now taking those games into a worldwide market. Since the company doubled its headcount in 2011, it has the ability to branch out and make news games as well.

“We believe role-playing and strategy games offer a big opportunity in social gaming compared to casual games, which other developers are focusing on,” said Peter Relan, CEO of CrowdStar. “With our games, It Girl and Top Girl, we went into role-playing games. Wasteland is the next step in the direction of strategy based social games.”

While other hardcore games look like spreadsheets (according to CrowdStar) Wasteland Empires uses real-time animation to give players a more dynamic game play experience.

“We think Wasteland Empires is a true innovation in this genre of gaming,” said Tseng. “The game is the first of its kind to combine real-time combat with ranked and skill-based competition. Wasteland also has an extensive and engaging storyline that will involve gamers on a deeper level.”