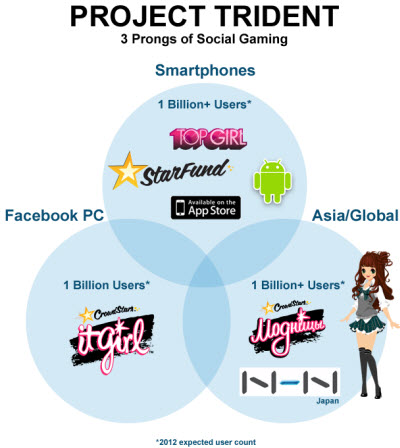 Game maker CrowdStar is unveiling a new business strategy today to grow its game business into a multiplatform empire.

The new strategy, which the company is calling “Project Trident” is a three-pronged approach to take a hit franchise and leverage it across multiple platforms and multiple territories, Peter Relan, chief executive of Burlingame, Calif.-based CrowdStar, told VentureBeat. The three prongs are 1) creating mainstream female-oriented games for Facebook, 2) extending those games to smartphones and tablets and 3) launching the games in various markets in Asia.

To take its games global, CrowdStar is launching eight different variants of its popular games in the fourth quarter so that its shopping and fashion-oriented “Girl” franchise games (It Girl on Facebook and Top Girl on mobile) will be available in all major territories in the world across 10 different social networks on the web, iOS, and Android, Relan said.

That’s a considerable jump in distribution, since the company was pretty much Facebook only at the start of the year. “So far it is going very well,” Relan said. While the goal is to make a game that reaches a billion users, Relan said that’s still some time away.

Relan has outlined his ambitious strategy to reach a billion gamers before.

CrowdStar will take its Girl franchise into Asia in a partnership with Korea’s online game giant NHN. In a deal with NHN Japan, CrowdStar’s It Girl will debut in the Japanese market. Sometime later, the company also hopes to launch new games in Korea and China. The company plans to introduce five versions of It Girl and Top Girl across five different social networks in Asia.

The company is still building games for Facebook and expects to launch a game this weekend. Rivals include Electronic Arts and Zynga.