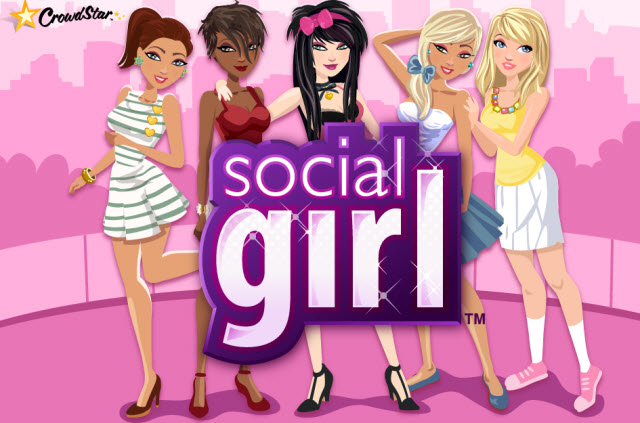 CrowdStar is turning out to be quite popular with the girls. The social gaming company proved that again this week with the launch of Social Girl, a new game for the iPhone, iPod Touch and iPad.

Since the game launched seven days ago, it has reached the No. 6 ranking for top-grossing apps in the App Store, moving ahead of Angry Birds. The game is part of a strategic expansion that Burlingame, Calif.-based CrowdStar calls Project Trident, where it wants to succeed in the mobile, social and Asian gaming markets. CrowdStar says it now gets about 50 percent of its revenue from mobile games.

It is doing so by focusing on the under-served market of girls and women, said Peter Relan, chief executive of CrowdStar, in an interview.

“Owning an audience on mobile is not so easy,” Relan said. “But we’re seeing it is powerful to focus on young women and girls.”

CrowdStar has lost a lot of ground on Facebook with its social games. The company was once No. 2 on Facebook and has dropped out of the top 15 now. But Relan said the shift to mobile has helped the company. CrowdStar has about 150 employees, with about half of them working on mobile games. The mobile titles are coming out faster than the Facebook games. But CrowdStar is still working on a hardcore post-apocalyptic game called Wasteland.

“We are not focused on large numbers of Facebook users anymore,” Relan said. “We are focused on our audience, which we can serve really well with higher average revenues per user.”

Previous games in the “Girl” series include It Girl and Top Girl. Top Girl saw similar success when it launched on mobile earlier this year, and It Girl has been a hit on Facebook. Social Girl challenges players to become the most popular girl in town by making virtual friends, going on dates and progressing in their relationships with boyfriends. Players advance their characters by befriending different cliques, unlocking new kinds of clothing and buying the best outfits.