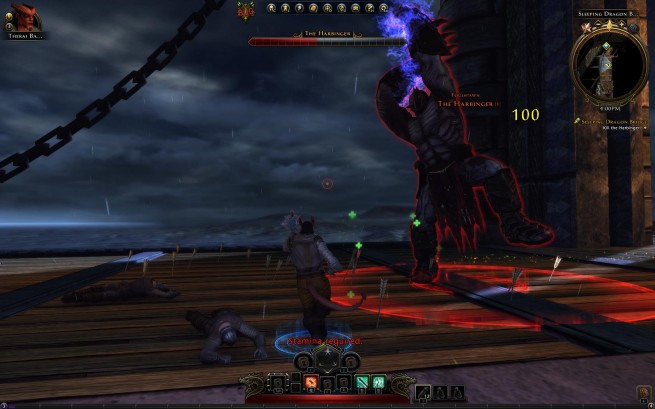 Neverwinter hit its open beta phase Tuesday. The upcoming massively multiplayer online role-playing game from developer Cryptic Studios and Perfect World Entertainment is one of the few major Dungeons & Dragons games in development during this generation of gaming.

This transmedia project — not only is Neverwinter part of the Forgotten Realms campaign setting, it’s also a book series from author R.A. Salvatore — is also coming out during an interesting time in D&D history. Neverwinter (originally scheduled to debut in 2012) is coming out while the 4th Edition of the tabletop game is winding down and the upcoming edition, dubbed “D&D Next” for now, is in playtesting.

Both Cryptic and D&D publisher Wizards of the Coast aren’t worried about this transition. Both don’t see the upcoming MMO as tied to the aging 4th Edition rules and world — even if the novels and Neverwinter core rulebooks are — nor do they fear that a future 5th Edition will make it redundant.

“[We’re] not worried at all. We’re superexcited to see the next version of Dungeons & Dragons!” said Neverwinter lead designer Zeke Sparkes. “We aren’t actually based or bound by any one particular set of the rules. We are trying to make a game that is evocative of D&D as a whole, not just one version of it.

“Plus most of us are big D&D fans and can’t wait to play the new system, so that doesn’t hurt, either.”

Wizards of the Coast says it’s not the rules that matter for Neverwinter, even if some players aren’t happy about the effects the transition from one edition’s ruleset to another has on the pen-and-paper and video game versions of the franchise.

“Neverwinter is an outstanding expression of Dungeons & Dragons and which mechanics they base their game play off isn’t important,” says Dungeons & Dragons brand director Nathan Stewart. “What is important is that a fan of D&D will play the game and have a great experience true to the brand.”

When it comes to the story of Neverwinter, which expands on the events of Salvatore’s series and D&D‘s Neverwinter campaign rulebook, Sparkes maintains nailing those details is far more important than dealing with core D&D rules.

“What happens with the story, history, and setting of Forgotten Realms has a bigger impact on us,” Sparkes said. “Fortunately, our relationship with WotC is really
good, and we get to help them tell their stories moving forward as a full-fledged part of the setting.”

Both sides see “D&D Next” as a good thing for Neverwinter — while the rules may be different, the increased attention that the playtest is bringing to D&D actually helps the MMO.

“People get excited when a new edition of Dungeons & Dragons comes out,” Sparkes said. ” As a part of that world now, anything that helps Wizards of the Coast make D&D stronger is really good for us. We work with them very frequently, so we’re already planning for what they have in store for the Forgotten Realms and are super excited to be a part of it.”