Gamers and cryptocurrency are a good match, according to a survey by BitCrystals, a blockchain gaming company that the Switzerland-based EverdreamSoft owns.

The survey said 46 percent of respondents had transacted a digital game item on the blockchain in the last 13 months.

And 63 percent of respondents who transact digital game items on the blockchain also spend money on in-app purchases in mobile games. 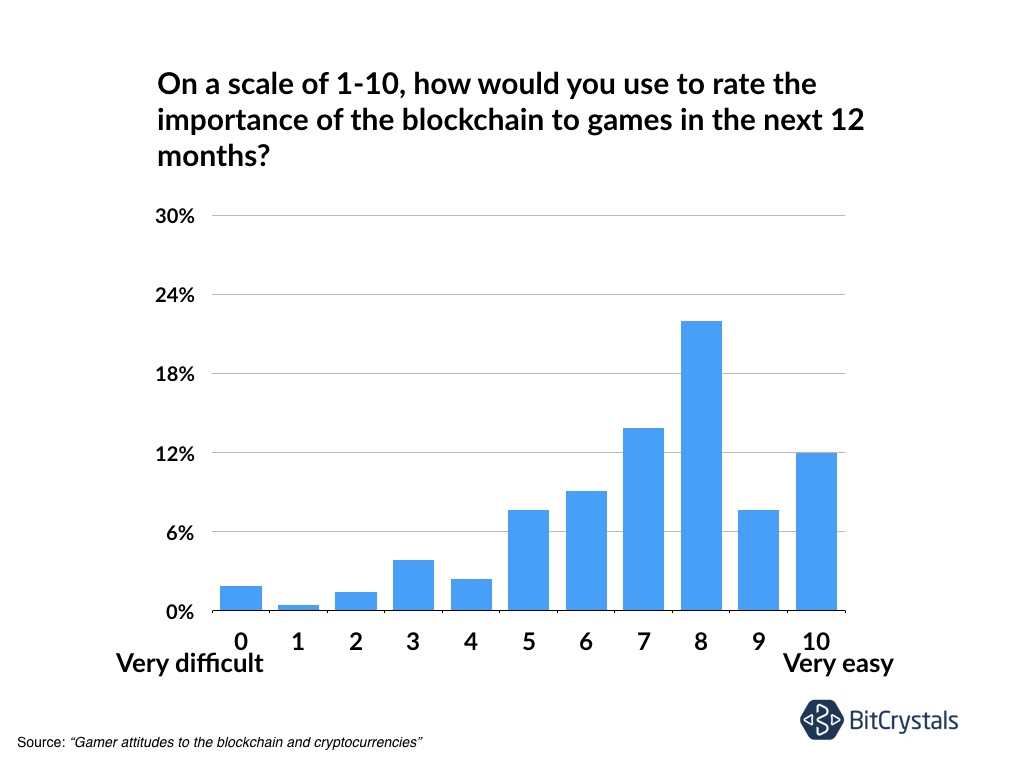 Above: BitCrystals customers believe that blockchain will be important.

It is of little surprise that freedom and ownership are the key drivers of why people engage in trading or buying items on the blockchain.

Of BitCrystals’ players that had used the blockchain features associated with a game, the majority said that they had found it reasonably easy. Bitcoin and Ethereum were the two most popular currencies that respondents had invested in with 83 percent purchasing Bitcoin and 75 percent Ethereum.

Respondents also demonstrated an apparent desire to invest in a wide range of cryptocurrencies with 42 percent spending in other currencies that were not listed.

Sixty-six percent of the players have invested in an ICO in the past 12 months. Overall investment in ICO’s seems to be quite conservative, with 35 percent investing in three or less and 33 percent not investing at all. At the other extreme,there was a group of 14 percent of players that have invested in ten or more currencies. 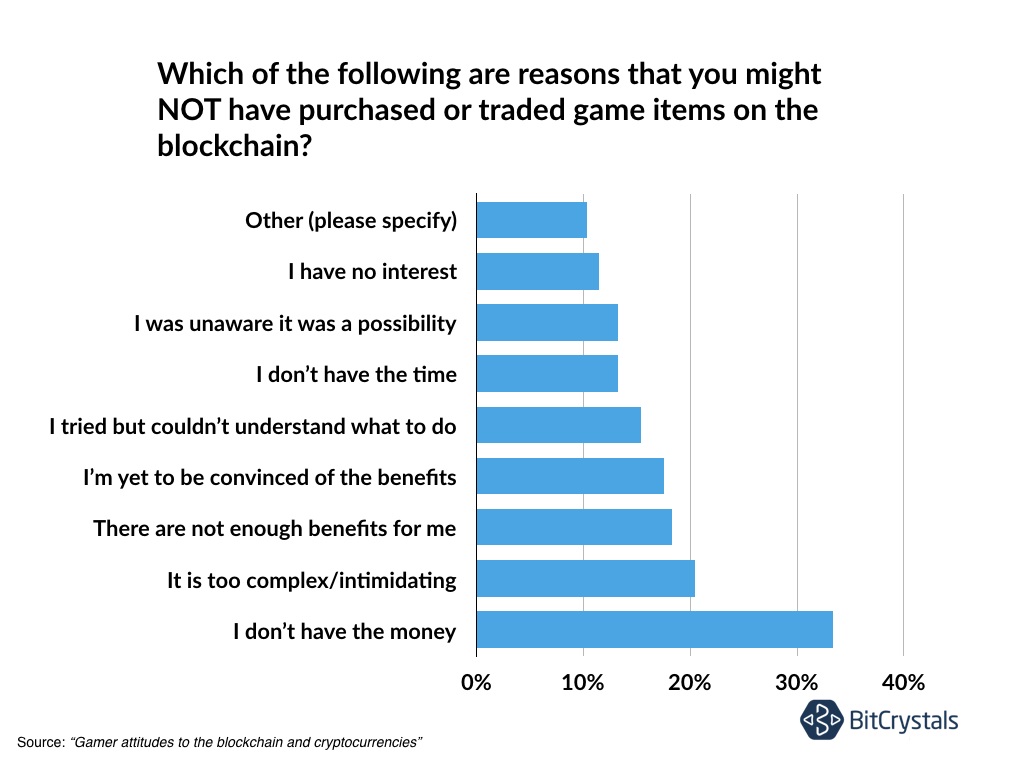 Above: Obstacles to buying blockchain items.

Of the 513 gamers surveyed, 90 percent were male and the largest group was ages 25 to 34. The largest pool of respondents came from the U.S. followed by Japan at 12 percent, 5 percent for Russia and 4 percent for the United Kingdom, and Canada.

“Although there is a lot of media attention currently being given to the potential use of the blockchain in the games industry, very little research has been done into the attitude of gamers themselves towards the use of blockchain and cryptocurrencies,” BitCrystals said in its survey. “Game developers need to focus on making the process as seamless as possible if there is to be a more significant adoption of blockchain and cryptocurrency.”

Seemingly contrary to popular perception in light of the sums people have spent on the blockchain, the ability to make money and buy assets as a long-term investment were two of the lowest reasons cited overall compared to all of the ones offered. 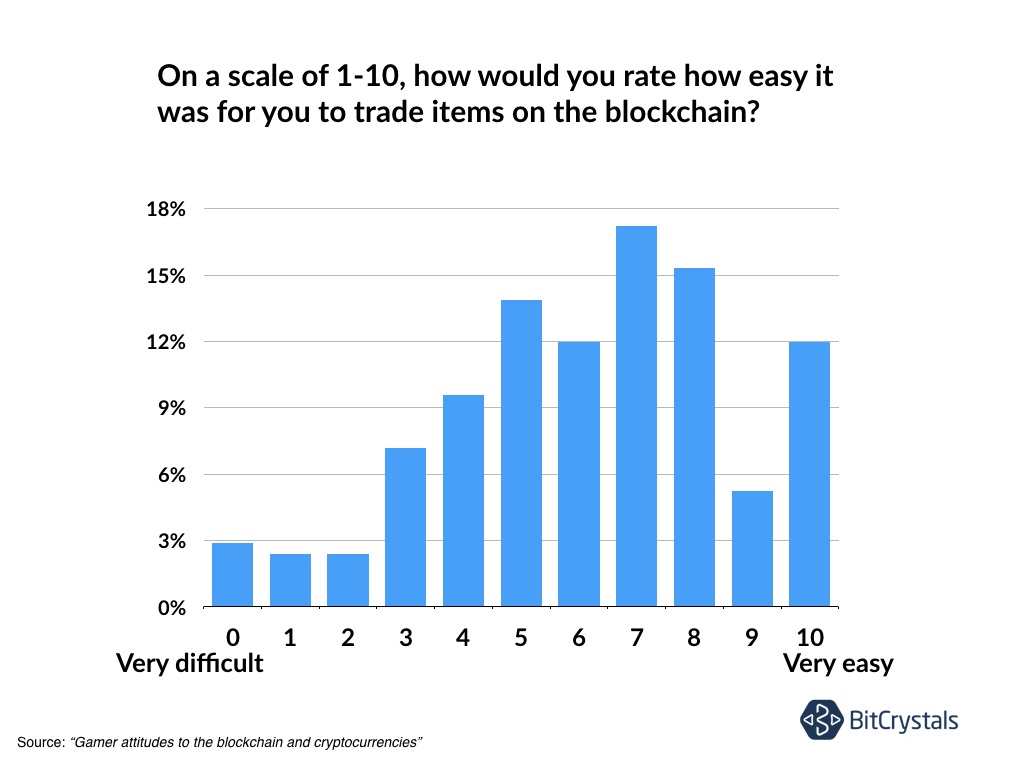 Above: Trading blockchain game assets isn’t that hard for this group of gamers.

The lowest interest/motivation expressed was around the capability for players to create their own content and trade it on the blockchain.

Of the players that had used the blockchain features associated with a game, the majority said that they had found it reasonably easy to trade items on the blockchain. Only a minority found the process difficult, so we can assume that the basic process of using the blockchain is not the main barrier to adoption.

The survey concluded, “While it is indeed positive to see that 46 percent of all respondents had transacted game items on the blockchain, it is also apparent that there is still some way to go to ensure that there is more widespread adoption of the blockchain with everyday gamers. The fact that those who had not transacted on the blockchain cited complexity and lack of money as the two significant factors should come as little surprise when some well-documented CryptoKitties have sold for over $100,000 per card.”

The survey also found “a healthy appetite among gamers for the blockchain and perhaps not in the way that one would expect.” The value of the blockchain wasn’t financial to gamers. Rather, the value comes from giving gamers a real sense of ownership and freedom to convert their items.