Electronic Arts has taken the wraps off of the hands-on gameplay for Crysis 3, and it looks marvelous. The first-person shooter is the third in developer Crytek’s series that debuted in 2007 with Crysis and returned in 2011 with Crysis 2.

Crytek just can’t stay out of the jungle. When it created Far Cry back in 2004, that game was set in the jungles of a beautiful tropical island. The graphics of the trees, fauna, and water were amazing for that time. Crysis and its ancillary game Crysis Warhead were also set in the jungle. But Crysis 2 took the firefights into Manhattan. Now, with the CryEngine 3, the Crytek team is bringing the jungle back, by putting it inside Manhattan.

Crytek and EA are hoping that that formula will keep this video game franchise in the upper echelons of the of multibillion-dollar FPS market. EA is revealing more of the gameplay today at the Electronic Entertainment Expo (E3), the game industry’s big trade show, in Los Angeles, Calif.

You might say it’s a funny way to show off the developer’s talent for creating rainforest 3D graphics. They’re twisting the story so that the odd mixture of jungle and skyscrapers makes sense. This tale is set in 2047, or 24 years after the events of Crysis 2, and the plot isn’t easy to follow. The hero is Laurence “Prophet” Barnes, a Delta Force major who appeared in the first two games. He actually killed himself in the second title and is now back as a revived memory — a separate consciousness inside your high-tech Nanosuit. Now, he wants revenge in the overgrown canyons of New York City.

Prophet is wearing the same cool Nanosuit that integrates into his body and gives him superhuman powers. In the past couple of games, the alien forces wanted to get their hands on that Nanosuit and hunted its wearer. But this time, Prophet is doing the hunting. He’s got a huge high-tech bow with flaming, explosive or razor-sharp arrows. I was able to play a full level hands-on and get a feel for what it’s like to be an invincible hunter. 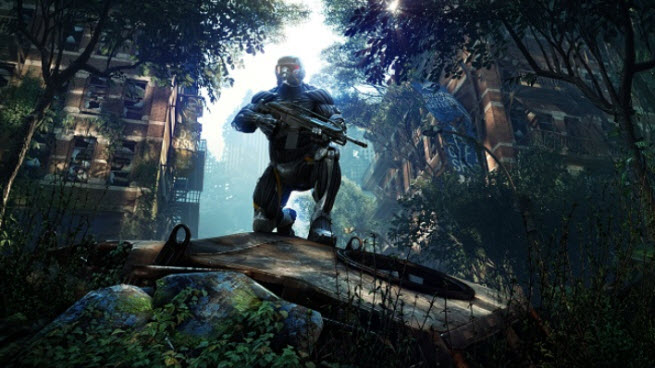 CryNet Enforcement and Local Logistics (CELL) corporation, which wants the Nanosuit, pursues Prophet. CELL has also built a giant Nanodome around the wrecked city of Manhattan to contain the virus introduced by the squid-like alien invaders known as the Ceph. That dome acts as a kind of greenhouse, and it has sparked the accelerated growth of a rainforest in the middle of the ruined the city. Within this structure, Prophet is going hunting, and he isn’t taking prisoners.

Hojengaard promises that the narrative will be compelling.

“It’s a deep and engaging story of revenge and redemption,” he said. “You find out who you are. The game pits human will against technology. Who will be the victor?”

This game is as much about showing off high-end 3D graphics as it is about a sci-fi story. The original Crysis debuted in 2007, and it was one of the best-looking games of its time. Crysis 2 came out in 2011, and it used the CryEngine 3 graphics technology. Crysis 3 also uses CryEngine 3, but it certainly seems like the visuals are prettier this time around.

Rasmus Hojengaard, director of creative development at Crytek, said to a group of game journalists that the team has tweaked the engine to produce even better graphics than before, including cool lens flares and realistic-looking water.

“We’ve worked on this for the past 16 months, and it’s the most ambitious project we have ever done,” he said.

The gameplay is also different. Prophet can fire deadly arrows while using the Nanosuit’s cloaking ability, Hojengaard said. He can fire an electric arrow at a circuit board to open a door from afar.

Prophet also has a new ability to hack systems. He points his hacking device at an automated enemy turret. If he can withstand the fire for long enough, he can reprogram the turret and then turn it against his enemies. This skill is a great way to get around what seem to be insurmountable enemy forces.

In this level, Prophet had to sneak up on a bunch of guards of a secret military faction and stealthily kill his foes. But at some point, he had to start shooting in the open because the guards were just too close to each other. In the Nanosuit, you have some awesome powers and can get your hands on some great weaponry. Butyou can always retreat and redirect your suit’s energy to a near-invisible mode if the fighting gets too hairy. You can also use your energy to maximize your suit’s armor strength or set the suit for speed if you want to outrun your enemies. But the various enemies have countermeasures, such as a way to strip the suit of energy, which eliminates your stealth powers.

The level was a tough one where I had to approach an automated turret guarded by a bunch of soldiers. I could have taken any number of paths through the sandbox-style level because the path wasn’t scripted. Then I had to fight through hordes of enemies. I could only get past some of them by hacking their support turrets. I had to plant a bomb and then escape. Overall, it was a visually amazing experience. 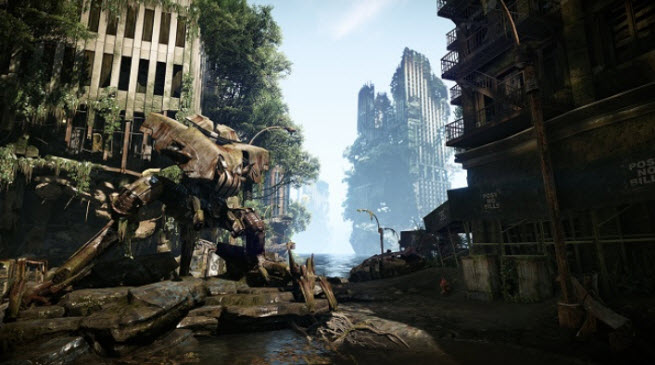