Ryse: Son of Rome developer Crytek is working to close the gap between gameplay and film.

In a talk given during the DICE Europe developer conference, Crytek founder Cevat Yerli explained some of the magic his studio is putting into its next-gen action game to make it visually pop. Ryse: Son of Rome is an Xbox One launch game, and Crytek is using its most cutting edge techniques to make it as cinematic as possible.

“Next-gen enables us to really heighten the gameplay experience,” said Yerli. “With the combined power of CryEngine and next-gen platforms  we can close the gap between games and cinematic experiences.”

Yerli went over a number of techniques that Crytek is implementing in Ryse. For example, Xbox One’s power enables the studio to use the same exact character models from the video cutscenes during gameplay. The model for Ryse hero Marius includes 85,000 triangle polygons and 770 joints for life-like articulation. Many of those joints are in Marius’s face. 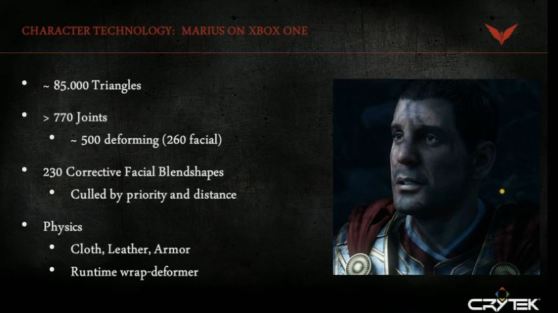 Above: Some notes from Crytek’s Cevat Yerli’s chat during DICE.

Crytek’s CryEngine is also capable of sub-surface lighting, which enables light to penetrate skin in a realistic manner.

The studio didn’t just turn to technology to close the gap between movies and games. Crytek worked hard to lock in its story for the game early during development. It mapped out the plot using storyboards just like a Hollywood production.

Finally, Crytek hired motion-capture actors based on their looks, acting abilities, and voices all together. Yerli pointed out that game developers often motion capture themselves and hire cheap voice actors. He said his team can heighten the quality of the game even further by taking the acting seriously in the game.