For a game that hasn’t come out yet, Ryse: Son of Rome has its share of fans and critics. It has inspired both love and scorn as one of the launch titles debuting Nov. 22 with Microsoft’s Xbox One video game console. 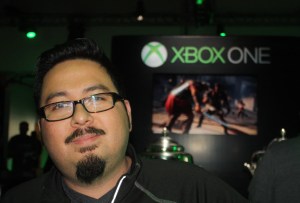 Above: P.J. Esteves of Crytek, the maker of Ryse: Son of Rome.

And with other big titles coming later, Ryse could turn out to be one of the reasons why consumers buy the $500 game console — or not. P.J. Esteves, the design director for Ryse at developer Crytek, has been following the feedback and he believes that the naysayers will find that Ryse is going to be better than they thought it was. I got a good look at the start of the game and feel like it plays a lot better than it did at E3, the game industry’s trade show, back in June.

Will fans agree? We caught up with Esteves at a recent Xbox One preview event to find out more. Here’s an edited transcript of our interview.

GamesBeat: What’s it been like getting closer to the finish line?

P. J. Esteves: It’s fantastic. We had a lot of passion on the project, a lot of effort getting to this point. Getting everything dialed in and getting all the bugs down has been a great experience. When else do you get to launch a new IP with a new console? Especially something we’re really passionate about like Rome.

GamesBeat: How long has Ryse been in the works now?

Esteves: Ultimately, since we decided to do a third-person action-adventure, it’s just a hair over two years. A lot of the foundations of the project – the setting in Rome, this up-close brutality – were there very early on. Comparing the time to what we were able to accomplish, it’s pretty phenomenal.

GamesBeat: How did you manage development without having the hardware in your hands? Some of this seems like it may have been easier because it’s very much like a PC, with the x86 architecture. 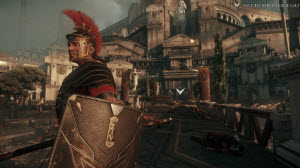 Above: Will you fulfill your father’s legacy?

GamesBeat: That doesn’t usually happen with a console launch, does it?

Esteves: It’s one of these things where the early hardware was coming in, but they already knew what the specs were going to be, so we did our best to be somewhere in the ballpark. Obviously, it doesn’t matter until you know what the real limitations are. But it was close.

GamesBeat: It seems like the game really has to have that hair-trigger reaction. Was that always one of your highest priorities?

Esteves: Definitely. Combat games are all about control. The controls need to feel tight. One of our main struggles in the project was that you want a game to be beautiful and cinematic. We wanted a very story-driven action experience with real attention to detail in facial expressions and storytelling. But that always flies in the face of good controls. The prettier you want something to be, usually you have to take away a bit of the player control, like to get the camera to frame something exactly how you want it.

I believe we truly made some innovations in the third-person genre. We pushed really hard to do stuff like our dynamic camera. The camera frames combat in a cinematic way, and then if you decide to take back control of the camera, it interpolates back out. Lots of little things like that.

GamesBeat: The executions are different than those from other kinds of games. 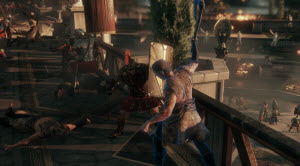 Above: Combat is bloody and fierce in Ryse

Esteves: Yeah, again, the execution cameras interpolate in, so it makes it feel very smooth and very cinematic. Just getting to that point of being able to fight five or six guys, you pull off an execution, and the camera framing works to both frame your enemies and show off the execution—we went through four or five iterations just on trying to get that right. The attention to detail we wanted to pull off has always been very high. We could have backed off and done something maybe half as good and moved on to the next thing, but we tried our best to land this cinematic combat experience.

GamesBeat: Did you make any final changes to the game, anything that incorporated feedback since you first showed it off?

Esteves: It’s been up and down. Honestly, the feedback has been all over the place. We’ve tried to stay our course and say, “This is our vision for the game.” Coming out of E3, our game was not done. I don’t know how many months it’s been since then. We came to E3 with what we had, and we had to disable some features. But coming out of it, seeing some of the reaction to the QTE stuff, it was obvious that we needed to push further on that. It wasn’t good enough.

If anything, it wasn’t so much that we were trying to take a knee-jerk reaction and change course. It was more like, OK, we’re on course to do this thing we want to do, but gamers feel this way. We wanted to react to that. We wanted them to feel like we made this beautiful cinematic experience, and if you have X and Y buttons all over the place—there just has to be a better way to do it. So we iterated many more times on that.

What you’re seeing now with the outlines, since E3, we went through three or four iterations. Even the shader for the outlines, I think we’ve had four different versions of the shader. 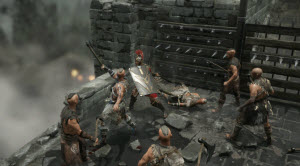 Above: These odds look good.

GamesBeat: What other feedback has been interesting to you?

Esteves: The main thing is, you get a lot of feedback about what people hope the game is going to be. It’s been hard to try to say, “Hey, no, we are making a combat game. We’re going to do that right.” But you can’t talk about it. You’re trying to release information in a way that makes sense for the launch of the title, trying to get a rhythm to it. So the hardest thing for me has been seeing all the feedback and knowing, “Yes, we’re doing that, we’re making a real action game! It’s not all QTEs!”

Waiting until now to let people actually play it and feel it—it’s been great, though, to see how engaged people are. It just shows us that what we decided to do with Ryse has definitely resonated. People have always dreamed of a game like this, in the same way we dreamed about making a game like this.