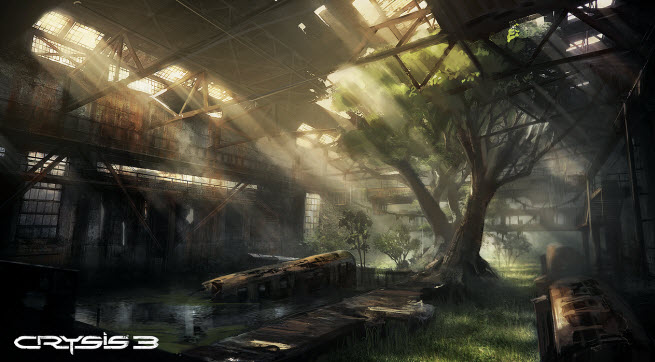 Let the graphics wars begin. Cevat Yerli, chief executive of Crytek, argues that his company’s upcoming game, Crysis 3 (to be published Feb. 19 by Electronic Arts) will “set the benchmark” in 3D graphics for games for the next two years. He believes the PC is racing ahead of the consoles now in terms of the beauty of its graphics. Crysis 3 will feature wonders such as swaying elephant grass, piercing beams of sunlight, water with true reflections, and a host of other special effects that make the game more immersive.

So far, Yerli said he isn’t impressed with the competition from Epic Games’ Unreal Engine 4. After we got a good look at Crysis 3, we have to agree that seeing is believing. Yerli’s got a spectacular-looking game. We caught up with Yerli at a recent event where he showed off Crysis 3 multiplayer and a new level from the single-player campaign. Here’s an edited transcript of our interview.

GamesBeat: So tell us, what’s the latest? We haven’t seen Crysis 3 since E3. 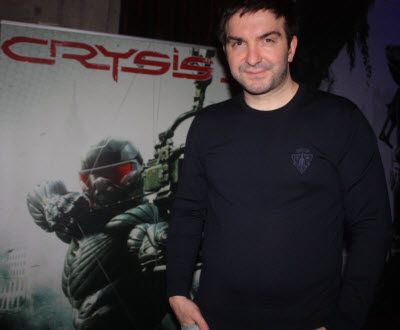 Cevat Yerli: Today we’re talking about two things in single-player. One of them is one of the single-player Wonders, what we call the Fields. It’s a level built around an old train yard that’s totally overgrown with tall grass fields.

What Crytek is about, as a studio, is technology inspiring gameplay in different ways. Technology opens up new ways of playing the game. With the Fields level, we wanted the effects of the grass to be part of decision-making. How do you traverse grass? How do you negotiate grass? How does the AI negotiate it? The interplay of all those factors gives us a new emergent gameplay experience. It’s not just beautiful. It’s part of the gameplay experience. We’ve done that for all of the Seven Wonders. The visual identity is not just visual. It’s actually a gameplay driver.

Yerli: Yeah, there are some nice movie references we’ve looked at as well, like the raptors. The scariness of being in that tall grass has been depicted in horror movies before. We wanted to let you feel hunted, but you can hunt them down as well. We also apply that same Seven Wonders principle to multiplayer. Some of it you can see here, but we’ll be showing more at a later date and when you play the game.

What we’re showing here is a multiplayer mode called the Hunter mode. With Hunter mode, the production goal is to make a single-player-esque multiplayer experience. Crysis is known for being a single-player game first, as opposed to something like Call of Duty which is more of a multiplayer game first, right? We wanted stay true to the sandbox experience of Crysis and bring that back through the urban rainforest and make this really new kind of experience for Crysis 3. But we were also thinking, “What can we do in the multiplayer space?” Apart from the usual suspects like deathmatch, team deathmatch, capture the flag, things like that.

Why do people play Crysis? It’s for the single-player. So we thought, “Can we do a multiplayer experience that’s like the single-player?” Single-player is asymmetric. You’re outnumbered, usually, in the single-player game. There are always more enemies than friends. You’re not just fighting one guy. You’re always fighting five or 10. So, can it be asymmetric? Also, can the asymmetric parts be played by humans? Sure, we can do that. We started experimenting with one versus five or two versus 10. When we did two on 10, that turned out to be pretty cool. 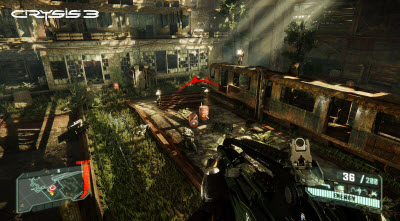 You and a friend play Nanosuit Hunters. You’re up against CELL Troopers. We give them the best weapons they’ve got, and the best weapons the Nanosuit has, the composite bow. We put everyone under time pressure, time-boxing it for three minutes or five minutes. Three minutes is the default setup. We make it a survival game, a hunt. The CELL team has to survive and get to their evacuation points. What happens is that it becomes a very personal, player-created story experience. “I was hiding there, and then I saw him come in on stealth mode. I saw the reflection as he passed by me.” They make up their own stories. It’s the closest thing to the feeling of a single-player game.

GamesBeat: That’s the common theme, then? This is a hunter’s game? 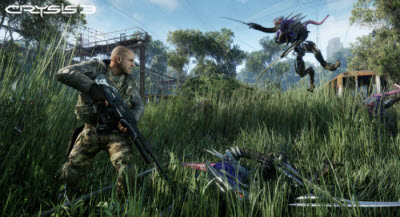 GamesBeat: The bow and arrow seems to fit pretty well into that theme.

Yerli: That’s why we created it. We wanted to make sure that you feel, when you… It’s not just pulling a trigger. You span the bow and release it. It’s a much more satisfying experience — taking out an alien with an arrow and watching him blow up.

GamesBeat: It feels like it’s technical quality has improved since E3. Have you been working on that?

Yerli: We finalized the engine, yeah. That’s what’s happened. We optimized the engine in the last few weeks. What you see here is very fresh code. The code is very optimized. We’re stretching more out of the Xbox and the PlayStation, but the PC is the one that really shines. I’m very happy with where we are on the console platforms, but our goal is to be a DX11-only game. We want to push the PC forward.

GamesBeat: And you have a February release date now?

GamesBeat: For how many years have you worked on this, then?

Yerli: About two and a half years. There was some overlap with Crysis 2. The majority of the team jumped from Crysis 2 to Crysis 3 after taking a break, but there was a small team already doing pre-production on Crysis 3 before Crysis 2 was quite finished. 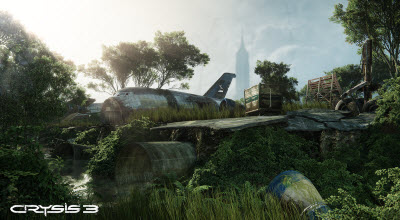 GamesBeat: How large did your team get on this project? A couple of hundred people?

Yerli: Counting absolutely everybody, probably 250. It’s not any bigger than Crysis 2, though. Crysis 2 was actually a larger team, because we were building so much content for the console versions. We had no console experience at that point. A good 100 people or so were there to simply make up for that lack of experience. When I look forward, Crysis 3 has the kind of team size that I would expect for our next-gen games in the next five years or so. They’ll peak at 250 people, tops.

GamesBeat: How do you compare this kind of effort to something like Warface?

Yerli: On Warface, right now, we’re at a peak count of about 150 or so. Warface is a true triple-A investment for us. Our company’s intention is to make games that are accessible for everyone for free, as long as they want to play it for free. In this world, the way I see it is that nobody has to be a pirate anymore. Everybody can be legal. If somebody wants to play, let’s say, the next Crysis game, in my ideal world there will be a free-to-play component to that. If people don’t want to pay money for it, they can just play it. They can still be part of the community.

Warface is not going to be something where we release it and then we update it for a year. Warface is a five-year service, or maybe even 10 years. We’re investing in building the game up until launch, and then we still have five years to go. It’s a very different development and release strategy. With Crysis 3, you peak differently. Warface is a much more flat organization.

GamesBeat: How do you think Crysis 3 is going to look compared to Unreal Engine 4 games or next-gen console games?

Yerli: I honestly think that Unreal Engine 4 would not be able to do Crysis 3 on consoles right now. The PC version could do it, maybe, but it would call for a higher PC spec. CryEngine 3 is capable of doing anything Unreal Engine 4 can. We don’t need to tick up the number to CryEngine 4.

As far as next-gen console games, I think Crysis 3 on the PC will be very comparable. Because it’s a high-end PC title, implicitly it’s a next-gen game. It’s just a next-gen PC game. 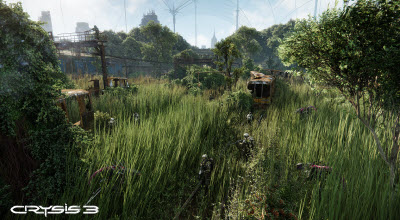 GamesBeat: Is there anything else that will be your most direct competition, then, in terms of graphics quality?

Yerli: No game that I know of. Well, there’s another one that we’re doing. [laughs] Crysis 3 on PC is going to be a benchmark experience for at least two years. When I see what’s happening on the PC market, and even what we do. The PC market is not going to grow vastly more before a lot of games catch up. We had the same thing with the first Crysis on PC. When Crysis launched, it was the high-end benchmark for a good three years. I think Crysis 3 is going to do that again.

GamesBeat: What would you say is the kind of scene that pushes the graphics to the limit? Scenes like the grass there, or something else?

Yerli: Each of the environments are pushing the density, the production density, and the unique assets that we are putting through the pipeline. Loading it from the disc to memory and to graphics. That pipeline is very intense, unlike anything we’ve done.

Usually you have one asset that you re-use a lot. Crysis has a lot of unique assets, and we’re re-using a lot of those as well. We’re pulling a lot of tricks to make both the unique assets and the density happen. That’s a very big challenge.