[Warning: spoilers coming for those who never did play Uncharted 3.]

The spiders of Uncharted 3: Drake’s Deception are never properly explained in the game. Naughty Dog, the developer of the highly acclaimed PlayStation 3 title, left it for the readers to figure out. But we caught up with Richard Lemarchand, lead game designer, for a proper explanation.

[We never did run this piece, but in honor of Lemarchand’s departure from Naughty Dog today, we’ll share it now.]

Like everyone else, we were been wondering what the whole secret was all about. Spiders have become the creepy non-human enemy of choice in so many games, so we wanted to get inside the developer’s view as to why they were such a big and mysterious part of Sony’s blockbuster game. The spiders are creepy, memorable, and enigmatic. When I played the game, I thought I had missed something explaining them, but Lemarchand says they were left unexplained on purpose.

The first clue about the existence of the spiders comes when we see a jar of a preserved dead spider in Katherine Marlowe’s secret library in the London underground. That suggests they are somehow associated with a secret society that is hundreds of years old.

Spiders are also seen climbing a wall in the distance as Drake crashes through the floor into a cavern at the French chateau. Nathan Drake, the main character, runs into a bunch of spiderwebs in the cavern. The next clue is when we see one of Talbot’s mercenaries, lying dead on a floor in the chateau. His face is green and it looks like he is either a zombie or has been poisoned. During a confrontation with Talbot’s men, one of them, Harris, grabs an artifact. The spiders emerge and attack him. Another mercenary grabs the amulet and then makes his escape. Drake and Sully wave torches to keep the spiders, who attack in a swarm, away. The oversize and ugly spiders flow like a stream of water in a coordinated, noisy attack.

After finding a stone globe, Drake once again runs into the spiders as he looks for a way to get the water flowing at the Crusader fortress in Syria.The spiders are no longer just a coincidence, as they have now been seen on two different continents.

And Elena, Sully and Drake run into the spiders again at the site of Iram in a tomb under Yemen. Drake uses a sawed-off shotgun to blast the spiders while Elena and Sully struggle to open a door. The spiders appear again near the end, while Drake is suffering from a hallucination. 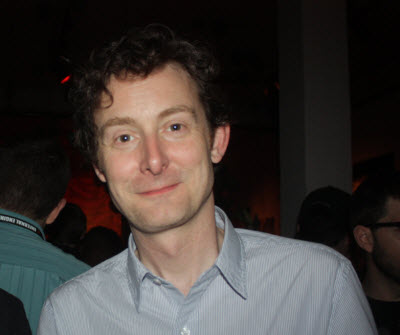 Lemarchand told me that the Naughty dog team had been trying to do the spiders ever since the original Uncharted game in 2006, and they finally had the graphics and physics technology to do them right in Uncharted 3. He thought they would “scare the bejeezus” out of gamers.

The jar of spiders was placed in Marlowe’s lab to alert the gamer that the spiders had been bred. The secret society was in charge of guarding ancient sites, and the spiders were their way to ward off unwanted treasure hunters.

That was why the spiders appeared whenever an ancient artifact was being stolen. It was also why the spiders didn’t attack the leaders of the secret society, Marlowe and Talbot. The mercenaries, however, were subject to attack if they threatened any artifacts.

So there you go, spider fans. Did Naughty Dog succeed in scaring the bejeezus out of you?