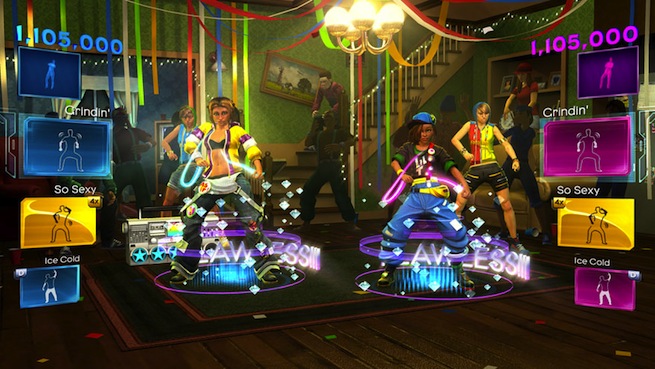 The body roll is my holy grail. Though many variations of the dance move exist, the combination of leg, hip, chest, and shoulder movements that form a sultry, S-shape curve through the body stays the same. And yet, no matter how many times I keep practicing it in Dance Central 3, I still can’t pull it off. But at least the journey to get there is rewarding enough for me to keep trying.

Created by Rock Band developer Harmonix Music Systems and Backbone Entertainment, Dance Central 3 (out Oct. 16) is the third game in the Xbox 360-exclusive series. Using Microsoft’s motion-detecting Kinect camera, your limbs must mirror the correct positions and movements of the dancing onscreen avatars as you try to keep up with the pulsing beats of the title’s eclectic soundtrack. Just add a few friends, and all of a sudden you have an instant dance party in your living room.

Consider Dance Central 3 as your yearly reminder of why you bought the Kinect in the first place.

Stellar soundtrack
With Dance Central 3’s curated list of 45 tracks, you — along with your friends and family — are sure to find at least a few favorites among them. Gloria Gaynor’s classic anthem “I Will Survive” and Van McCoy’s “The Hustle” finally make their expected appearances in the series, as well as the “Macarena,” Los del Rio’s catchy (or annoying, depending on whom you ask) single that practically took over the world in the mid ’90s.

DC3’s selection of modern hits is incredibly varied as well. Cali Swag District’s “Teach Me How to Dougie” leads the pack with its crushingly hard moves. Justin Bieber’s “Boyfriend” comes right out of the top 40. And the developers even acknowledge the burgeoning Korean Pop scene with 2NE1’s “I Am the Best.” As an added bonus, if you own any of the previous Dance Central games, you can import those tracks into Dance Central 3 for a small fee (400 Microsoft Points per disc). Any downloadable tracks you bought off the Xbox Live Marketplace in the past are also compatible with this year’s release. 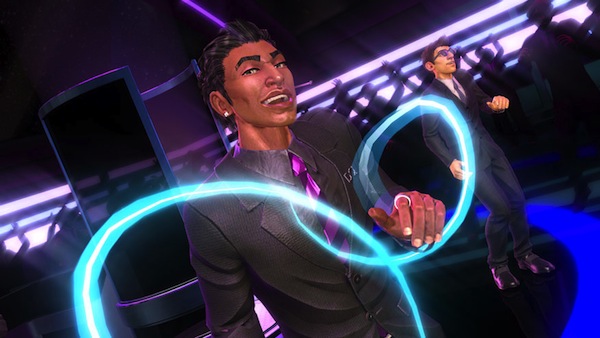 Dancing through time
While a story mode is, arguably, inessential to a dancing game, I’m glad Harmonix thinks otherwise. Dance Central 3 takes you on a time-traveling tour of the most iconic songs, outfits, and locations from each decade, starting in the ’70s and continuing well into the future. It’s like playing through viral-video sensation “Evolution of Dance.”

The evil Dr. Tan wants to brainwash the world to follow his own brand of dancing, and it’s up to you, as a fresh agent out of Dance Central Intelligence, to stop him. Characters old and new help you out during your quest to decode the hidden “power moves” scattered in each time period. Once you find them all, you’ll uncover the decade’s special dance craze. The campaign is ridiculous and silly, but I appreciated the jolts of nostalgia in jumping from one era to the next.

Time traveling isn’t just a gimmick here, either. Some songs and dance moves actually build upon one another organically. A few of the basic moves you’ll learn during the ’70s part of the game give you a solid foundation of their mechanics since those same moves pop up again during more complex routines in later decades. DC3 doesn’t do this with all songs and dance moves, but it’s a neat feature which makes the story feel more than just a candy-coated tutorial.

Multiplayer nirvana
Harmonix merges cooperative and competitive dancing into an explosive mix with Crew Throwdown where two teams (of one to four players each) choose their crew, pose for a photo, and take on a series of 1-on-1 challenges against each other

Your team’s dance order is up to you. If a pure head-to-head battle is on deck, you might want to send your best dancer to compete. If it’s Keep the Beat, a freestyle mode where you have to dance with the beat (while being mindful of stealing your opponent’s “groove” by copying their moves), you should send someone who has at least a little sense of rhythm. My favorite challenge by far is Strike a Pose. Instead of dancing to a routine, you have to match the poses shown onscreen as fast as you can to rack up points. Your body will twist and turn in ways you’ve never imagined, and both crews will laugh their butts off at the ensuing comedy.

Regardless of the type of challenge your group faces, Crew Throwdown is sure to elicit some passionate cheering, boos, and smiles from anyone watching. You won’t even notice how tired you are until you actually sit down. Even then, you’ll still want to keep playing. That’s the hallmark of a great multiplayer mode.

And if Crew Throwdown isn’t your thing, or you want to play multiplayer without any pressure, the new Party Time mode offers a hands-free approach. Once you select it, the game automatically queues up a song and a mode, and any two players can jump in when they’re ready. If you don’t like the choices, you can simply change them.

Limitations of the hardware
I can’t help but feel like Dance Central 3 is held back by the Kinect’s constraints. The title works flawlessly most of the time, but little quirks here and there can disrupt the experience. The most frustrating part for me is when I do the same maneuvers shown on TV — moves that I rehearsed many times to get right — and the Kinect still thinks I’m doing them wrong, especially with tricky movements that involved any leg work. These issues made me feel like all that sweat and practice were for nothing.

Harmonix continues its fantastic legacy of music games with Dance Central 3. With its addition of 45 more tracks and routines to the franchise’s repertoire, and its suite of new multiplayer modes that push the genre in new and interesting ways, the series is stronger than ever. Whether you want to shed off a few pounds, learn some real dance moves for fun, or just want a great party offering to have on hand, Dance Central 3 definitely belongs in your library.

Dance Central 3 will be out on Oct. 16 for the Xbox 360. The publisher provided GamesBeat with a copy of the game for the purpose of this review.