Chip Moore and Dylan Takeyama and came up with a concept for a turn-based strategy-RPG while in college. But Moore was an economics major; he wasn’t in programming or anything like that. So they turned to GameMaker and formed a team, Sword & Axe. They launched a successful Kickstarter and found a publisher, Freedom Games.

Today, that work culminates in the surprise launch of Dark Deity on Steam. It has an evocative, illustrated anime look, with a mix of 2D retro styles. Its Advantage system, which factors in armor, damage, and weapon types, riffs off the likes of Fire Emblem and Pokémon. Leather armor may offer you more protection form blunt damage, but plate mail may not. You assemble a group of wizards and warriors (OK, clerics and rogues, too) from a military academy. Their graduations are a bit rushed, but the that’s how things work in the world of Eltan, which is in the grips of war.

“There’s actually a variety of art styles in the game.” Moore said. “Something that was a big goal of ours was to match that sort of retro style in the gameplay and combat with a more updated modern look beautiful illustrated styles. But we have these really like high resolution beautiful character portraits that are then scaled down to much, much lower-res characters, and that’s something that we’ve really wanted to achieve, we’re pretty happy with how it turned out.”

Above: When units lock into combat, Dark Deity goes to another battle screen.

Dark Deity’s recruits include a Garrick, a warrior whose father is the headmaster of the academy; Irving, his close friend and the Brookstead Military Academy’s all-star; Maren, the granddaughter of the realm’s high priest; and her sibling, Alden, a budding mage. You’ll find other friends and recruits (10 characters in all) for your troop as well. Combined, you end up with 50 classes, and those characters can form bonds through conversations and chats. These result in special actions when near one another in combat.

“The kingdom is currently at war, and the king has made some questionable decisions that you find out in the first few chapters that leads to them being conscripted to the army, basically, a couple of years before they were supposed to be, some as young Alden here who is obviously extremely young,” Moore said. “They’re thrust into a situation in which they shouldn’t be.”

And Dark Deity’s story deals with the ramifications of this as the group navigates a realm at war. And in a way, this reflects the experience of Sword & Axe, a studio composed of younger developers. This is their first game, and it appears that Dark Deity has some complex systems and a great deal of narrative that feels ambitious for a group working on their first project.

“We will let the scale run away a little bit. We spent a really long time, much longer I think than a lot of teams have, because we were in college and we weren’t like full-blast on development in this for a long time,” Moore said. “We have built this world that is really, there’s no easy way to say this, but it’s really deep and there’s a lot of lore to it, even stuff that doesn’t come up in this game, necessarily. We have spent a really, really long time building out this world and building up these characters before being full-swing, and so it felt like a waste to not deep dive into these characters and give everyone a look into this world that is at my eyes extremely interesting.” 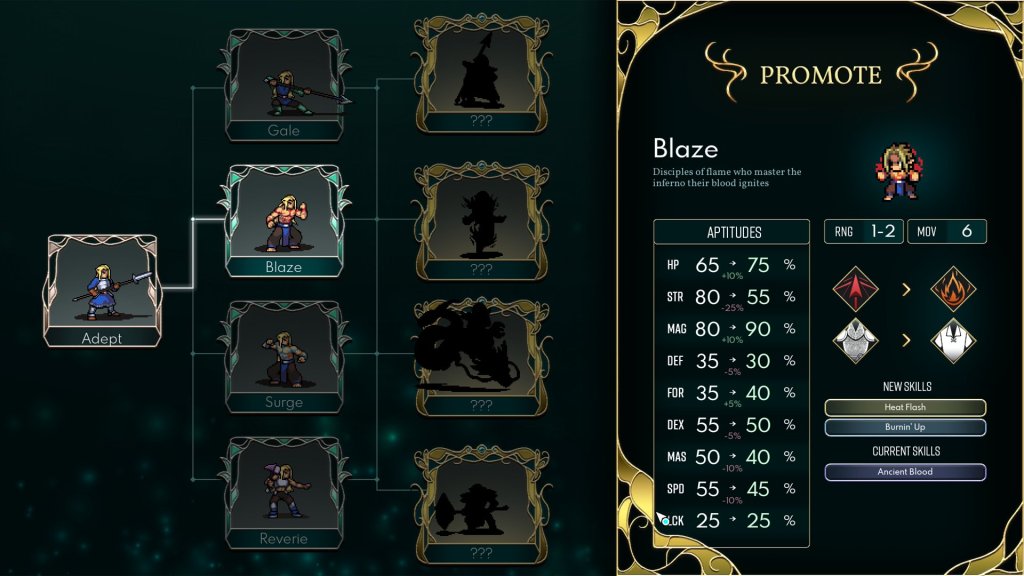 Above: Dark Deity’s characters have class promotion trees, providing for a great deal of variety in builds.

Take the weapon upgrade system. Preparing for a battle, Moore showed how this works. “It’s essential to the game,” Moore said. “Every unit has four weapons equipped at all times, and you get these weapons tokens … then you can upgrade some of the different tiers of weapons with. You’ll see Elias has a Tier 2 power sphere. Irving has a Tier 2 balanced sword, and Sia has a finesse dagger, the shiv.”

These upgrades apply to spells as well. As you upgrade them, you get different spell animations. One of Alden’s ranged spells may fire one purple missile but when upgraded fires two, three, or more. “This is like a just an additional customization layer on top of their normal stats and pull ups that adds quite a bit of replayability,” he said.

Finally, Sword & Axe has a different approach to death. When one of your warriors dies, you don’t lose them forever, as you would in other strategy RPGs. Dark Deity uses what the studio calls the “Grave Wounds” system, in which your forces can recover a handful of times from serious injuries before they croak.

The 2D art on battlefields doesn’t offer elevation, so you can’t position your troops to take advantage of high ground, though some spells and other abilities work over obstacles such as walls.

Moore walked me through a battle, explaining how the Advantage system works and how it differs from such mechanics in other games.

“Something that’s sort of really central to how this game works is the Advantage system. When you click on Sia, you see these little arrows, red down arrows and green up arrows. So that refers to the Advantage system, which functions sort of in a similar way to Pokémon’s type advantage. So if we take Sia, for example, she has leather armor, and she does piercing damage. There’s four armor types and nine damage types, and you’ll see piercing gets a huge damage bonus versus chain armor but small damage against [plate].” Moore said. “All of the different damage types have units that they do huge bonus damage toward, so she’ll do well against these guys, but she’s not going to do a whole lot of damage against that [plate].”

Adepts like Alden don’t have crowd control magics (no fireballs, folks), but they can teleport your allies around the battlefield. They can also chain foes, locking them in place so that they can’t move for one turn. Moore says there’s way to modify chain with other classes to give it more range. And rogues can disarm foes as well (a good combo is to lock and then disarm a baddie).

If Dark Deity sounds interesting, you can check it out now on Steam, as it launches today.