With two main offices in Oregon and Shanghai, Dark Horse Games will create games through licensing partnerships with external game developers as well as its own in-house, first-party properties. The company will start bringing some of its 425 story-driven characters and universes to video games, said Dark Horse Games general manager Johnny Lee in an exclusive interview with GamesBeat.

Over the company’s 35-year history, Dark Horse has published such world-famous intellectual properties as Hellboy, Frank Miller’s Sin City and 300, Umbrella Academy, Polar, Lady Killer, Emily the Strange, Usagi Yojimbo, Resident Alien. It’s a good time for the expansion, as gaming is hot, and in some cases, it’s generating more revenue for a given intellectual property than other forms of entertainment. As for Dark Horse Comics, 2020 was a good year for the company’s core comic and publishing business, with good revenue growth, Lee said.

Dark Horse Games is in discussions with some of the world’s top gaming studios to create triple-A licensed titles based on Dark Horse Comics’ library to be released over the next several years on all platforms: PC, consoles, mobile, and cloud-based services.

“We are very focused on finding the right game development partner for top IPs,” said Lee.

Both internal and external game development

Dark Horse Comics doesn’t have the staff yet to make triple-A games with its most famous IPs. So it will try to make partnerships with high-end game development companies that can make them, Dark Horse Comics will build its own internal game studios to work on games based on either newer, less established IPs or those that are older but less well known.

“We have evergreen properties, like Hellboy, where there will always be interest in making games and doing collaborations,” he said. “We and our partners can really evaluate if a story IP and character universe would be a good fit for games that they’re internally designing and developing. I think most triple-A devs that I’ve talked to prefer their game dev team to build core gameplay and then fit an IP to it, versus shoving an IP down their throats. We’re sensitive to that.” 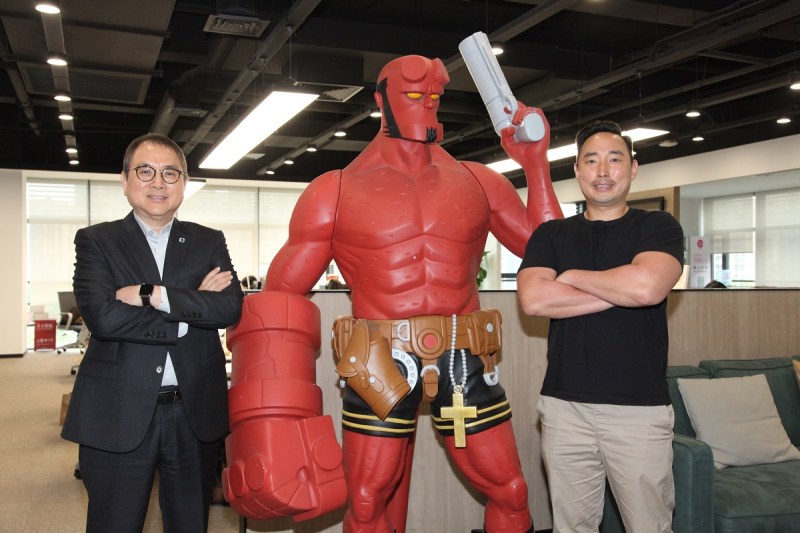 Above: Stanley Cheung (left) and Johnny Lee stand next to Hellboy at Dark Horse Comics.

Meanwhile, Dark Horse Games’ first-party games will focus on refreshing older and less established IPs for gaming. It will also produce and release multimedia projects (e.g., webtoons and anime) in conjunction with the first-party games.

Dark Horse Comics is based in Milwaukie, Oregon, and run by president Mike Richardson (who’s also a founder). It also has offices in Shanghai.

Lee spent time in software and consumer products, but he knew his passion was media and entertainment. He started a company in New York that made an indie documentary with funding from Samsung, and he eventually sold it to Sony Screen Gems. Then he started a game specialist consultancy, DGTL, in Seoul to do cross-border investments, co-development, and publishing deals. Most recently he led business development and commercial strategy at Improbable.

“I fell into gaming,” Lee said. “Given my background, this new position was a little surreal. I thought my M&A experience, startup building, and media entertainment company experience have all come full circle and I’m using all those skills and network every day now.”

Lessons from the big guys

Dark Horse Comics hasn’t had much involvement in games, but it did license a 2008 game called Hellboy: The Science of Evil, published by Konami and developed by Krome Studios and Big Ant Studios. Meanwhile, Dark Horse Comics is the official publisher of some game-based comics for titles, but it doesn’t have video game rights for those.

“We are speaking to all types of developers and we are open to all kinds of creative ideas, even some indie studios with cool ideas around our IPs,” said Lee. “We right now have spent a lot of time on finding the rights in game collaborations at the triple-A level where the stories and the characters fit. We are in late-stage discussions with several of them. And so if those go well, you’ll see pretty big Dark Horse Comics characters in live triple-A games no later than the end of Q1 next year.”

Dark Horse Comics has 161 employees. Over the first year, Lee expects his own games staff will remain small, with less than 10 people.

“We plan to synergize our game launches with unique multimedia efforts,” Lee said.

Looking at lessons from the larger comic companies such as Marvel and DC, Lee said they all have significant location-based entertainment and merchandising channels that have become huge over the years, and they find entertainment synergies in their IPs across entertainment including games. Stanley Cheung, the executive chairman of Dark Horse Comics, is the former chairman of Walt Disney Greater China. Lee said Dark Horse Comics tends to be hands-on with production and expects to work with its licensees and developers closely.

“We hope to get there one day,” he said.