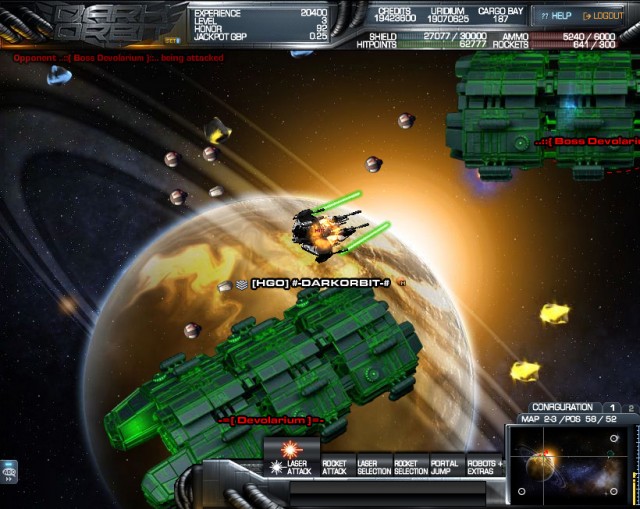 In the world of free-to-play games, there is a theory that small numbers of players are willing to spend large amounts of money on the games they love. These players are rather unflatteringly referred to as ‘whales’.

Dark Orbit players recently helped demonstrate this whale theory, with 2000 of them each splashing out €1000 ($1335) on a rare virtual space-drone, which can be used to gain a competitive advantage in the game.

Whilst some developers shy away from the sale of big game-changing items, preferring to offer premium features with optional subscriptions, Bigpoint are embracing the fact that some players will spend big, in order to improve their performance. Thanks to the four-day space-drone sale, Bigpoint netted a cool €2 million (about $2.67 million) in extra sales revenue.

Dark Orbit is a space-based massively multiplayer online game, in which your spaceship can be supported in combat by drones. There are different levels of drone ranking up to the 10th Drone, which is the very rare Zeus Drone. The usual means of obtaining the Zeus drone is to collect all 9 previous drones and then obtain blueprints in order to make it in the game. When Bigpoint put this limited number of Zeus drones up for sale, at a quite staggering price for a virtual item, 2000 players happily stepped forward to pay, in order to circumvent the otherwise arduous task of collecting it legitimately.

Bigpoint Games, a German company specializing in browser-based free-to-play online games, was founded in 2002. It is currently on course to deliver over €200 million (about $267 million) in revenue from the sale of virtual goods in its games this year. In April this year, two major private equity firms bought a majority stake in the company for $350 million.

With figures like that, it is easy to see why many developers are now looking at the free-to-play model as the best way of monetizing their own games.

[Update: Gamesbrief has followed up its initial report, now stating that the 2000 Zeus Drones were sold for in-game currency, not cash. If a player had bought in-game currency (Uridium) at full price, they would have spent the equivalent of €1000 on one Drone. It is possible that players purchasing the Zeus Drones had previously bought Uridium at discounted prices, or earned it through in-game activities. As a result, it is not possible to say exactly how much revenue Bigpoint made from the sale of this single item.]