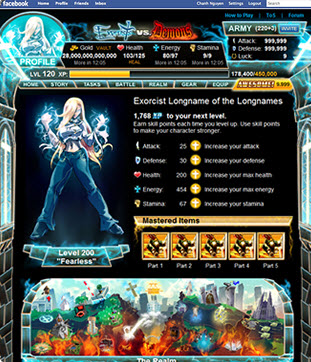 Small social game company Dark Roast Media may not be the biggest on the block, but it’s doing something interesting with its Facebook game, Exorcists vs. Demons. The company has launched a new sweepstakes campaign to promote its game using Publishers Clearing House, the sweepstakes company that has made its own move into social media.

Metuchen, N.J.-based Dark Roast Media integrated PCH Boost, an applications programming interface (API) that lets consumers enter sweepstakes contests with the chance to win $100,000. The contests are promoted on Facebook via display ads, which help drive users to the Dark Roast Media game. PCH handles the administration of the sweepstakes through its own back-end infrastructure. The results are an interesting case study for how game companies can get their games more attention.

Dark Roast Media launched the sweepstakes on July 11. Since that time, the game’s monthly active user base has grown from 5,000 to 20,000. That’s small, but the PCH sweepstakes is getting new people to play the game. Joe Ziznewski, founder of Dark Roast Media, said that ads are only one component of “effective acquisition cost.” Of those who click on the sweepstakes ads, about 85 percent are clicking through to install the game. Users are passing the details of the promotion along to other friends on Facebook, which helps the game spread in a more viral manner. Based on the results, Dark Roast Media estimates it has cut its cost of acquiring users by more than 30 percent since it launched the PCH Boost sweepstakes platform.

Exorcists vs. Demons is a social role-playing game where players can choose to fight with exorcists or demons in a battle over the fate of the world. Since most people have heard of Publishers Clearing House’s sweepstakes, there isn’t as much fear about joining an online contest as there otherwise might be. the company gets more than 5 million unique visitors per month and has a database of 10 million customers. Of course, putting a sweepstakes in a game only works with a certain kind of game. Exorcists vs. Demons has more than 1,600 reviews and has a 4.9 out of 5.0 rating.

Dark Roast Media is seeking strategic investors and distribution partners in the coming months. It has 15 employees and was founded in 2004. It has all sorts of rivals in social games, from Zynga to Meteor Games. To date, the company has raised $175,000 in friends and family money.