Dark Souls, developed by From Software and released in 2011, redefines the idea of death in video games. In fact, death is integral to the game in every capacity, including its gameplay, minimalist story, and how the character interacts with other players online.

Dark Souls takes place in a world that is on the verge of death, only to be reborn in a new "Age." As it explains at the beginning, the current "Age of Fire" is ruled over by these god-like beings who use the power of souls to keep all-powerful bonfires lit across the world, with the implication that these bonfires grant immortality for these god-like beings.

The game begins towards the end of this Age, where the Lord of Cinder, Gwyn, notices that the bonfires were waning and first sacrifices his status as a god to keep them lit. When this fails, he then curses humans with a "dark sign," which forces them to be reborn as undead after they die, thus trapping them in a cycle of dying/rebirth until one of them manages to become powerful enough to sacrifice himself to the fires, and thus keep the Age of Fire from ending.

The only problem with this is that eventually, the humans afflicted with the dark sign end up going mad and eventually just become zombies who will mindlessly attack anything. Your player is one of these undead — in fact, the "chosen" undead who will be able to supplant Gwyn and either choose to end or prolong the Age of Fire.

Sounds confusing? It really is, but we'll get to the story soon enough. I didn't even really do the full story justice, but it is a very long, dense, and confusing narrative to pick up in one blog post.

This theme of death and rebirth permeates through every facet of this game. Let's start from a gameplay aspect: The game is a third-person, action role-playing game — and one that is infamous for its perceived difficulty. In fact it may be one of the most difficult games that I have ever played.

Dark Souls is an open-world dungeon crawler, where the dungeons intersect with one another in one gigantic world and where the player is free to move from one to the other (for the most part) as he unlocks them. It is a massive world where the player is one tiny, insignificant speck in it.

He can adorn himself in armor and the best weapons, but even with great equipment, the player lives in a world where large demons and hordes of zombies lurk around every corner; where every place is laden with traps, ambushes, and other horrible surprises that often result in instant death. Interspersed are larger boss creatures, usually massive in size or great in power, whose fights, even with the best preparation, are incredibly testing of one's skill.

And from a gameplay aspect, you are just a weak, pathetic human who must traverse all of this in order to complete the game. The player's life and stamina bars are incredibly small — usually a few good hits from even the weakest of enemies can put him in danger of dying. Thus, it becomes imperative for the player to continue to adapt to whatever situation he is in as each new area requires modifications to equipment, the character's statistics, and play style.

Even with the stats optimized, the player still feels vulnerable in most battles; most powerful weapons have slow attack animations, leaving the player wide open after swinging, as does drinking the "Estus Flask," which is the player's health potion for the game. Death is never very far away whenever one plays in Dark Souls and can come at any time (the game doesn't even allow you to pause!).

Needless to say, the player will die many times over the course of the game, and each time he does, he loses all the souls he has collected (the games currency, which is gained from killing other enemies) and is reborn back at the last bonfirewhere he rested. Further, all the enemies in the area will also respawn whenever the player decides to rest at the bonfire.

This makes resting at certain areas a precarious gamble as one can easily become stuck in a dungeon with no easy route out. For all of its difficulty, though, the game is frustratingly addictive since when you finally conquer a tricky section or boss, it really makes all of those times you had died really worthwhile. 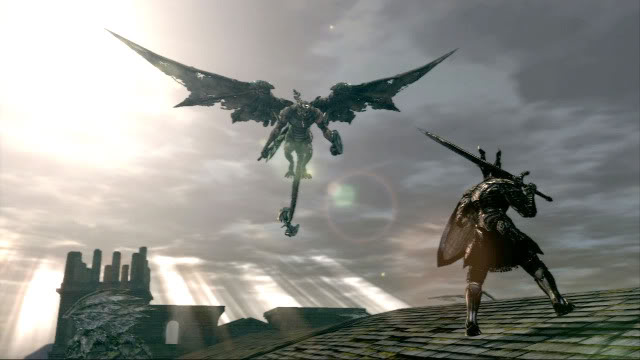 The theme of death and rebirth is exacted beautifully in not only the gameplay but also in the world of the game itself. From the very first glance, it is a world that is slowly dying. Normal humans are scarce and sparse, and much more prevalent are fellow undead who have failed in the same quest you are undertaking (who now constitute many of the enemies that you fight).

The gigantic medieval metropolis of Lordran looks glorious from a distance but up close is a frightful ruin populated with monsters and undead. Sunlight peaks over the mountains of the distance, literally placing the game in a constant twilight (although, it actually turns out that the sunlight is merely an illusion maintained by one of the last gods, and once he is defeated, then the world is bathed in darkness), harkening back to the fact that this "day" of the gods is almost at an end.

Many of the non-player characters who are still alive are undead as well. They are merely biding their time before they too slip into madness (as many of them eventually do). The game thrives on an air of despair — an almost gallows humor — but with the slightest tinge of hope that the world will someday get better and that the constant chain of rebirth and death will eventually end.

The game, as with most of its story, only hints at what happened to the world — only offering exposition in brief snippits of dialogue, descriptions from items, and a hell of a lot of insinuation from the player. But once uncovered and realized, each area, enemy, and even the individual items have a lot of backstory.

For example, one section of the game is the Great Swamp, which used to be a home to many people and a group of pyromancers, and it rested at the very bottom of Lordran. One of these pyromancers, though, was shunned from the group for his development of "dark pyromancy" and his worship of a Chaos Witch (who is half spider). He in turn poisoned the Great Swamp, which in turn morphed much of the populace and creatures there into mutants; this area was then cordoned off and was named Blighttown.

All of this information, though, is based off of the dialogue from one NPC (who is incredibly tough to find), and the item description of a Poison spell bought from one pyromancer. Thus the story, though minimilist, is wonderfully deep and complex if the player takes the time to realize it. 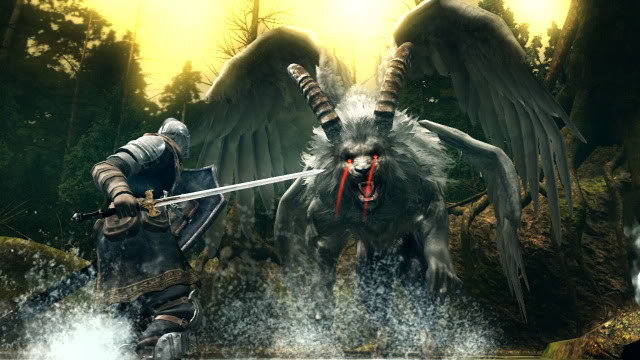 But every section of the world is flawed, broken and dying. The general city that housed most of the populace is now filled with undead (the Undead Burg). The actual palace of the gods is now deserted except by one lone god who is himself an outcast of the others. And the deepest regions of the city are infested with demons due to a failed experiment to replicate the Great Flames.

But the debate that this "Age" should die is left up to the player. At the end of the game, after defeating the final boss (an undead and insane version of the Lord of Cinder) the player has the ultimate choice: either sacrifice himself to the bonfire and by his power prolong the Age of Fire or let it die and usher in a new Age of Dark.

The death of the player, if choosing to sacrifice himself now, is a permanent one, yet it is left up to debate if the Age of Fire will now be forever prolonged. After all, the Lord of Cinder technically sacrificed himself yet the Age of Fire still diminished eventually (his sacrifice also seems more hollow by the fact that the area around him after he was sacrificed is utterly destroyed and burnt to cinders –you literally fight him in the remains of a great palace that houses the flame, thus by sacrificing yourself you are causing this calamity again). But if you do not sacrifice yourself, does the curse of the cycle of rebirth and death end for humanity? It is a tough choice, for after fighting through so much, do you really want to just offer up your character like that, especially when the ramifications of your choice are so uncertain?

The main question is, as always: Is this game considered a work of art? Unequivocally, yes. It is a beautifully realized game with a solid theme or "argument" that permeated almost every facet of its development.

From the player experiencing death after death to him witnessing the death of an era, Dark Souls really explores the meaning of death in a video game. Even with eschewing the practices of "lives" and a "game over" screen by granting the player unlimited lives or invulnerability from truly dying, the game manages, through its brilliant level design and sheer difficulty, to still grant plenty of consequences for death.

Death, in Dark Souls, signifies sacrifice, from the level of the player (if you stockpile too many souls, you most likely will lose them after unexpectedly dying) to trying to score a brash hit on a boss that will certainly kill him (only to be killed in return) to the very end of the game, where the player can make the ultimate sacrifice and maybe "save" the world.

For the idea of sacrifice, especially with death, is tied to the idea of hope. With each death in this game is the hope that your efforts are saving this world and cleansing it one demon at a time. With each talk with a dismal NPC, the player realizes how much he really does want to change the world and make it better for these people. With each boss the player kills and special item he gets comes the bolstering of his hopes that he just made it a step closer to eventually beating the game. It is a fully realized game with a wonderful premise, and a beautiful world in which its themes of death, rebirth, and hope are present on every level.