Some series fans were immediately on the defensive with the announcement of Dark Souls II: Scholar of the First Sin, a remake of the PlayStation 3 and Xbox 360 game released last March. Members of Bandai Namco’s official forums were quick to scrutinize the November announcement, working among themselves to try to find out why they would want to pay another $50 or more to buy what looked to be a DLC bundle repackaging of a still relatively new game.

At least some of the benefits were clear. PlayStation 4 and Xbox One owners would be able to enjoy improved graphics. Bandai Namco and From Software also spoke of networked play improvements. But the rest of the features in this announcement were vague. The existing version would see a patch that would bring some improvements, though the bulk of the new features would not a part of it. This left owners of the older game feeling somewhat cheated for buying in on the initial release.

After speaking with producer Atsuo Yoshimura at a Bandai Namco media event in San Francisco last week, it’s clear that the new version is certainly worth the outlay for new players. But will fans of the current Dark Souls II be willing to pay once more for these updates?

Dark Souls II: Scholar of the First Sin includes the original game, all three subsequent DLC releases, and a number of improvements, including better gameplay balance, new story enhancements, and even an increase in online player numbers, jumping from four to six. For the PlayStation 4, Xbox One, and PC versions, the visuals get a resolution bump to 1080p, running at a variable 60 frames per second.

It’s also coming to legacy consoles, but it won’t see the graphical and performance enhancements. This version will also miss out on the increase of players in online play. Yoshimura says that system limitations prevent From Software from implementing the more attractive advantages.

But the Xbox 360 and PS3 versions will get improved matchmaking online, new item descriptions, and some game balance adjustments as well as the new NPCs that bring about new story experiences. Existing owners of the original Dark Souls II will get all of these updates in a free patch. As a nod to existing players, they’ll see this update Feb. 5, more than two months before First Sin’s April 9 release.

But slight improvements to matchmaking and some new item descriptions might not excite existing owners. An improvement of visuals for the PS4/Xbox One versions alone might be enough to convince fans to buy in, though. It looks outstanding, with sharp, clean textures and smooth movement. 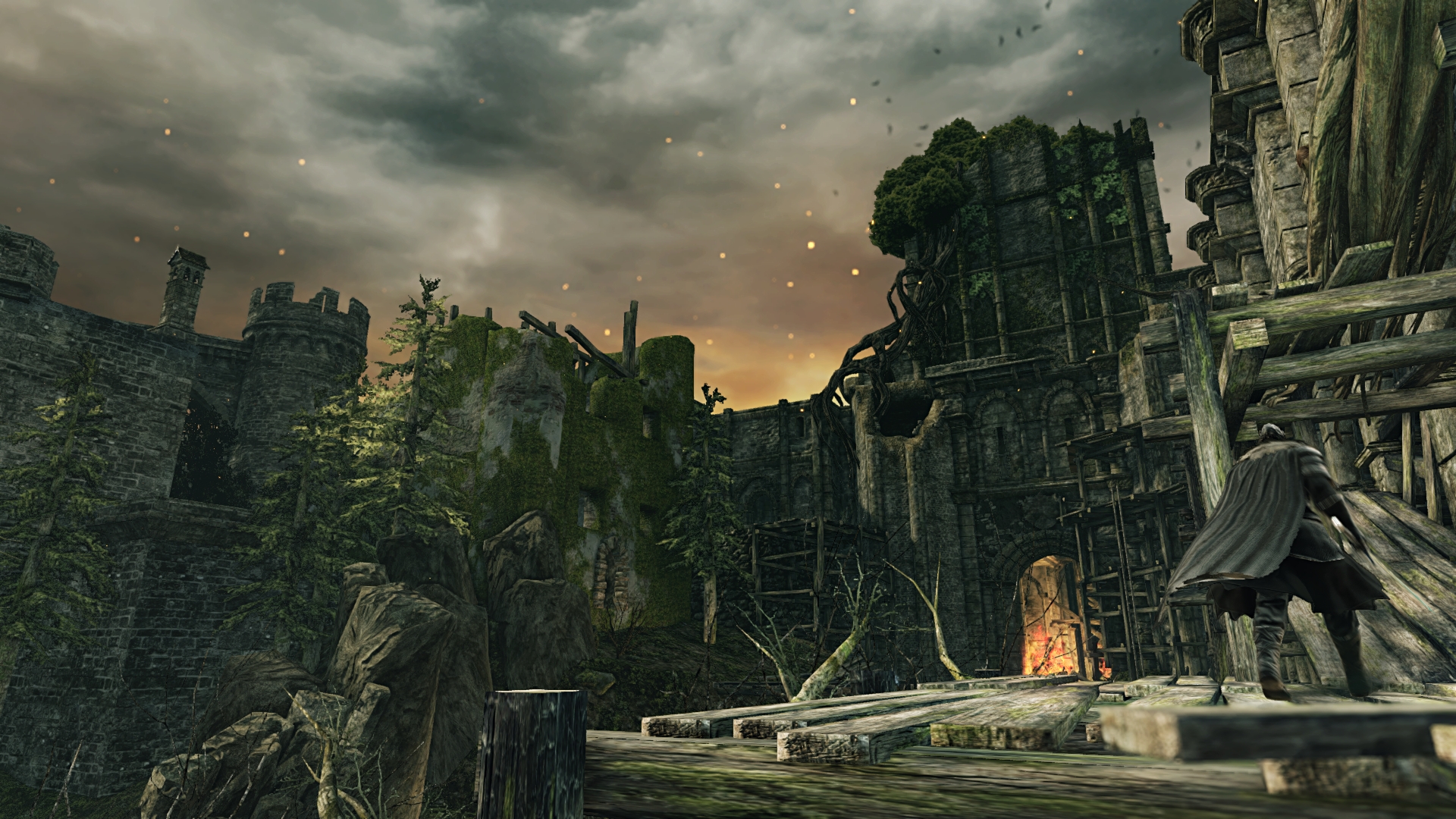 Above: Forest of Fallen Giants, from Dark Souls II: Scholar of the First Sin

Yoshimura says that DirectX 11 enables a lot of the improvements that just weren’t possible before.

“We are using a lot of Direct X 11 technology for the graphics,” he explains. “With the clothes and other special effects we added — these are not possible with DirectX 9. All of the improvements including new lighting and shadows are also only available in the games running on DirectX 11.”

But this means that players of the original DirectX 9 PC release will not see any of the improvements.

Yoshimura credits the fan patch that came out just after the original game’s release as inspiration for their graphical update work.

“I know that some players online have released an unofficial patch,” he said. “That was an awesome patch! Even guys from From Software — like one week after we released the game the patch was already available— we were so surprised. We really considered letting those guys online do our official patch.”

DirectX 11 also enables the increase of online players as well as new enemy placements. While less visible than graphical updates, new placements bring a freshness — and more challenges — for those that have already played the original.

Yoshimura says that the team at From Software approached this rerelease from a director’s cut perspective. Going back in allowed them to optimize enemy placement and AI, though their work made for some pretty big changes in the end. He says that this alone makes Scholar of the First Sin a completely new gameplay experience.

In a preview play session I noticed high-level enemies making earlier appearances. Yoshimura says that they did this all throughout the game, making it “almost brand new.”

“All the enemy placement in all the maps is completely revised. Almost nothing is in the same place,” he explained.

A big draw for players on all platforms is the additional storyline added to Scholar of the First Sin. Yoshimura says that a new invasion nonplayer character plays a key role in the background story. His vague hints confirm that this new character is related to key NPCs from the original. While he avoids spilling any solid details, he feels that the supplementary story content offered in this remake fills out the Dark Souls II world, taking it to “new dimensions.” 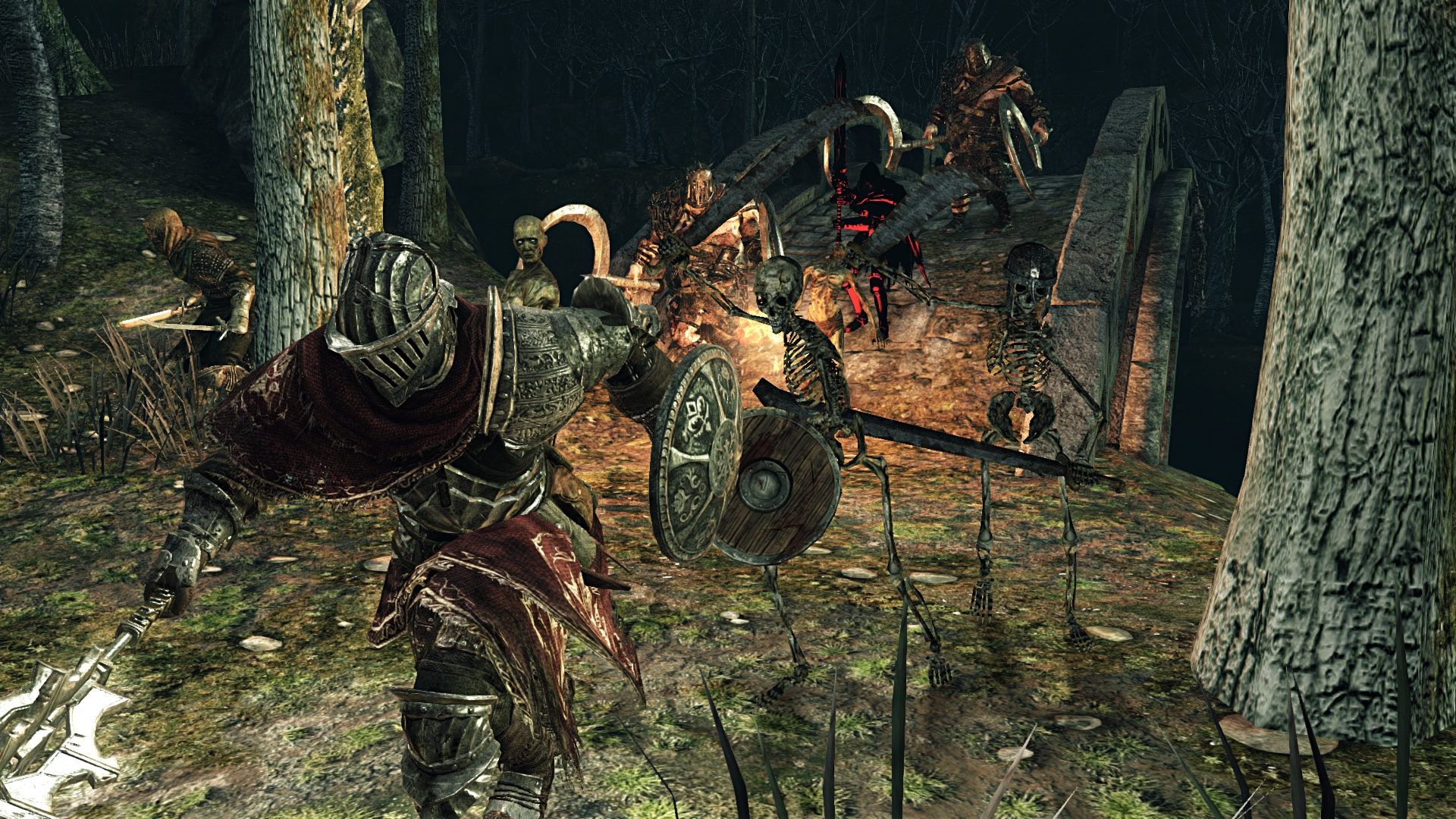 Above: Huntsman’s Copse, from Dark Souls II: Scholar of the First Sin

I asked Yoshimura to take the opportunity to put concerned fans’ minds at ease. He was happy to take it, admitting that he knows that some are questioning the release’s worth.

“Dark Souls II: Scholars of the First Sin is like a rediscovery of Dark Souls II from a director’s cut perspective. [This] was something that the team really wanted to do, something they really wanted players to experience. With all these awesome features, I’m confident saying that players will be playing a completely different game.”

He says that even for those that own all three DLC packs that he’s confident that this new release is worth paying for.

Finally, I asked Yoshimura how he felt about Scholar of the First Sin releasing back-to-back with the latest From Software game, the highly anticipated Souls series follow-up, Bloodborne. He isn’t too worried about inter-company competition and says that the teams support and congratulate each other at From Software.

“I don’t have any concerns. I’m hoping they’re both games that interest fans,”  says Yoshimura. “I really hope that fans pick up both Bloodborne and Scholar of the First Sin.”