Between borrowing the core gameplay loop of Monster Hunter and the free-to-play business model popularized by Fortnite, developer Phoenix Labs makes no secret of the influence behind Dauntless. It’s out now for PlayStation 4, Xbox One, and PC (I played the game on PC). A Switch version is scheduled to come out later this year.

On paper, an accessible action role-playing game with no cost-for-entry barrier sounds fantastic. And, for the first several hours, it is. Dauntless, which recently launched version 1.0 after a lengthy beta period, offers some incredibly satisfying behemoth-slaying gameplay. The problem is that it quickly becomes dull and repetitive, mostly due to a lack of gameplay variety.

Until you hit that wall, there’s a lot to like. After a handful of hunts in Dauntless, I was feeling good about my progress. Each slain behemoth yielded crafting materials that allowed me to quickly upgrade from my beginner armor and weapons, giving me the strength needed to take on tougher monsters. That central conceit is what drives progression, and will likely determine how long you’re willing to play. For me, Dauntless started to fizzle a bit around the time I was able to craft weapons and sets of armor covering each of the element types present in the game.

There are six different element types present: blaze, frost, terra, shock, radiant, and umbral. Each behemoth aligns with one of them, and they take extra damage from the opposing element. Frost, for example, is weak to fire, and vice versa. This is also true for terra/shock and radiant/umbral. For much of the early game, gearing up in order to be prepared for any element is the carrot on the stick, so to speak. The prospect of having all my bases covered was surprisingly motivating. And with a handful of different armor sets and weapons within each element, there’s no shortage of targets to aim for.

The actual hunting of behemoths is also a lot of fun. Combat is fast-paced, and each of the weapons boasts a unique play style. At the time of publication, there are seven different weapons, all with distinct movesets. For example, the axe favors a slower, more deliberate approach, while the chain blades are a whirlwind of quick slashes. Developer Phoenix Labs definitely flexed its creative muscles with some fun designs, such as a hammer that doubles as a shotgun, and — my personal favorite — a spear that can fire missiles. For the most part, each weapon is accessible enough that they’re easy to pick up and start doing damage, but boast plenty of depth for dedicated players looking to specialize in just one or two.

Rewards for doing pretty much anything

Dauntless’ method of character progression is the mastery system. Looking at the mastery screen in the menu presents a sprawling checklist of goals to aim for. These include breaking behemoth parts with specific weapons, reaching crafting milestones, slaying a certain number of each monster, and more. The reward for completing goals is usually experience that contributes to your slayer’s overall level.

The upside of the mastery system is that it feels like you’re rewarded for everything you do. A hunt usually results in two or three items getting checked off the list, which can be satisfying for a while. It’s also nicely categorized with sections for each weapon and monster, making it easy to navigate to the tasks you’re most interested in. 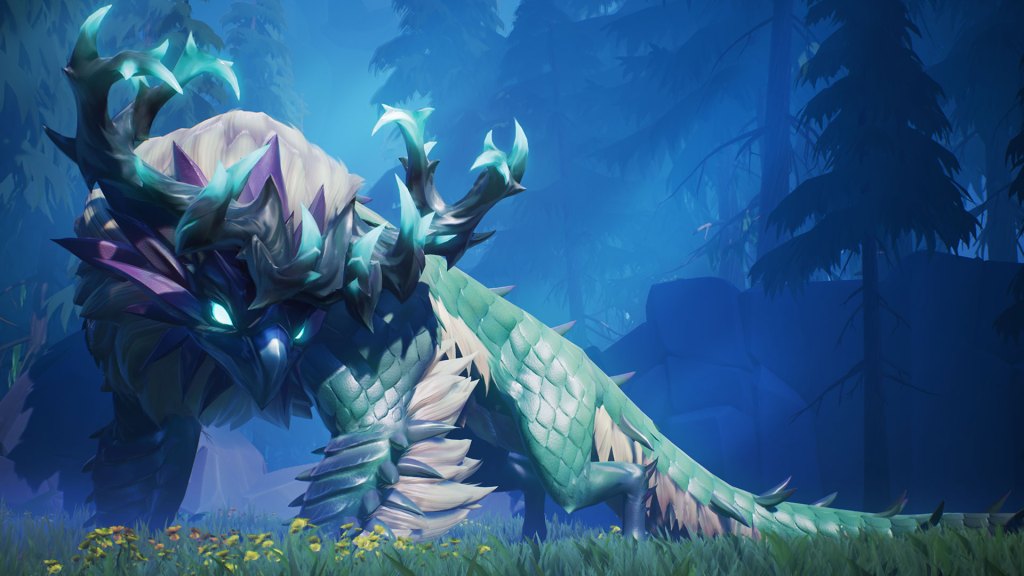 Above: Behemoths can be pretty big.

Hunts are refreshingly bite-sized. I rarely encountered a quest that lasted more than 15 to 20 minutes, making Dauntless a great way to kill short amounts of time. It also means that you’ll be upgrading gear at a fairly brisk pace in the early game. This is likely a design decision aimed at keeping you playing, and it certainly worked on me. I never felt the fatigue that can accompany some of the more long-winded quests of Monster Hunter.

I wish the small environments were a bit more exciting, but I was never left aimlessly wandering through a directionless labyrinth of tunnels either. In all, Dauntless’ compact presentation plays well with its intended audience.

One of Dauntless’ most touted features is its cross-platform play. The game is available on PS4, Xbox One, Switch, and PC, with your character’s progression constant across all four. It’s not uncommon for matchmaking to place you in a team with players on other platforms, and I didn’t notice any significant lag or technical issues.

Outside of combat, Dauntless is an unfortunately sterile experience that feels rather mechanical. The free-to-play model plays a small role in this thanks to constant advertisement of a “hunt pass” and purchasable loot boxes (the game calls them cores) that contain weapon and armor modifications. These are common conceits in 2019, however, and are mostly easy to overlook if you’re at all familiar with such monetization.

My biggest gripe is with quest structuring. When you’re first dropped into the hub town of Ramsgate, you receive several quests that are meant to introduce you to the core tenets of the Dauntless gameplay loop. You’ll hunt first-tier monsters and use the gained parts to craft first-tier armor; you’ll gather a handful of first-tier herbs from the field to make first-tier potions. And then, once those objectives are complete, you’ll do it again except for second-tier behemoths and herbs without much fanfare. 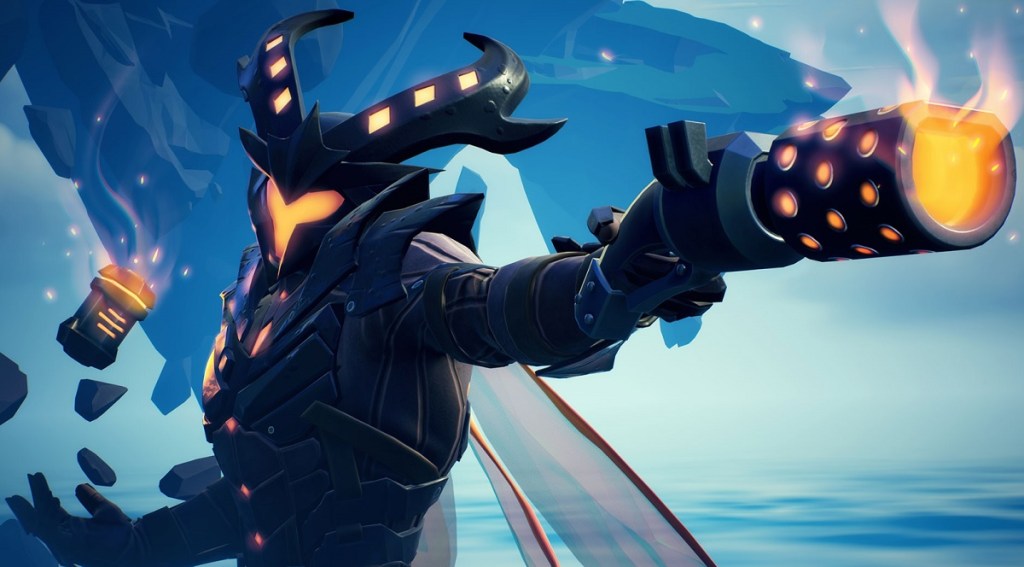 Above: You have a bunch of different weapons to choose from.

Quests are presented in a list format that may as well be an Excel checklist. The entire structure lacks any personality, highlighting a disappointing absence of storytelling exacerbated by a setting ripe with potential. This method of assigning quests lays bare Phoenix Lab’s seeming apathy toward building an immersive world.

Like the questing structure, the mastery system is also tiered, meaning you’ll be doing the same thing over and over again from the beginning all the way to the end game. It’s both overwhelming and demotivating, another glance behind the curtain at a machine more interested in keeping you playing rather than providing any compelling reason to do so. I understand that some players will find this checklist style an appealing way to track progress, but to me it feels like a slog.

Given Phoenix Lab’s unabashed appreciation for Monster Hunter, it’s surprising to see a lack of features borrowed by Dauntless. The most obvious omission is any kind of a training area. While the combat is solid, the only way to go hands-on with new weapons is out in the field, meaning you’ll be stumbling with those aether strikers while under threat of behemoth attack.

This into-the-fire approach results in two things: It makes learning new weapons harder than necessary, and I often felt like a detriment to my team while I fumbled with unfamiliar controls. Ramsgate is in desperate need of an area where players can learn a new weapon at their own pace, and I feel that this is going to be crucial to Dauntless’ ability to attract and retain new players in the long run.

The biggest compliment I can give Dauntless is its willingness to shake up the free-to-play formula. Until now, the business model has been limited almost exclusively to shooters, MOBAs, and the occasional card game. Phoenix Labs has built the most ambitious F2P action-RPG this side of Warframe, and, with some more polish, it could truly go on to become something special. Right now, though, it’s a transparently barebones experience with some fun combat layered on.

Much of your enjoyment is going to be dependent on your ability to put up with the grind and a syllabus-style presentation. For me, it all feels too mechanical. I don’t recall any of the NPC’s names, and I don’t care to because they’re nothing more than a delivery system for piles of repetitive quests. Others may not mind, though, which is great. I just wish there was a bit more personality on display. Dauntless is a living game, though, and Hopefully Phoenix Labs can refine its presentation in the future.

I wanted very badly to love Dauntless, and for a time I think I did thanks to the fantastic combat and weapon variety. But the lack of any real storytelling makes the repetitive questing structure a glaring issue in desperate need of some TLC. If you’re looking for a new go-to F2P experience, you could do much worse — just don’t expect a world drenched teeming with lore and compelling characters.

Dauntless is out no for PlayStation 4, Xbox One, and PC. We reviewed the game on PC with a VIP Package code provided by the developer that included in-game items and currency.