At DICE Jaffe’s controversial topic focused on why developers should not try to tell stories in their games. That might come as a bit of shock from the director of the original God of War, an epic tale of revenge whose complex narrative helped give the intense action sequences a compelling context. It also flies directly in the face of what Jaffe’s fellow Eat Sleep Play members told GamesBeat in regards to why certain characters and features were cut from the upcoming Twisted Metal game, which launches tomorrow on PlayStation 3.

Is Jaffe an abrasive genius, or a contrarian troll? You can judge for yourself from the unedited transcript of his talk below. 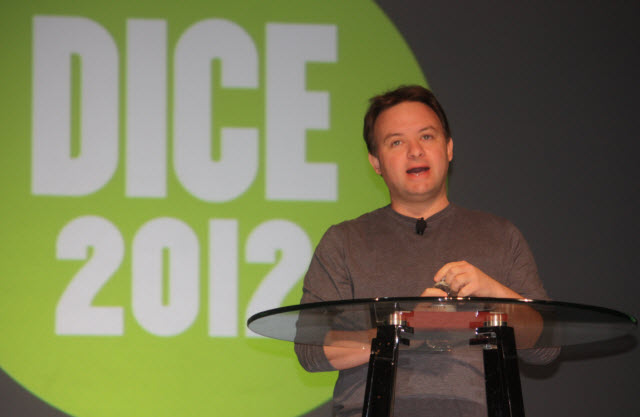 David Jaffe: Hey, you guys. Um… So, y’know, I don’t need slides, I don’t have any PowerPoint, I’ve been real busy the last few days offending women. That takes up a lot of time, so I apologize. But really quickly, I wanted to say, before I jump into my talk… My mom is watching on GameSpot, and everybody says, “Well, Jaffe, you cuss a lot.” And she says to me, before I get off the phone with her, “Well, watch your language,” and I say, “You know, you taught me…” I grew up… She cusses like a sailor. So if you guys would do me a huge favor… She’s 80 years old, living in Alabama, could you guys, on three, please say “Hi, Bobby!” She would get the biggest fuckin’ kick out of this. So I’m gonna count to three, if you would indulge me, I would appreciate it, so here we go. One… It’s “Hi, Bobby,” I don’t know why she’s called Bobby, it’s not her real name, but here we go, one, two, three.

I’ll tell you, y’all just made an old lady orgasm. That’s fantastic, thank you for that. So now, my talk… Oh, I gotta get water, I was supposed to have water… My talk is, um… Can I get water, whenever they get a chance? My talk is actually a warning, about why we shouldn’t tell stories with our video games. I think it’s a bad idea, I think it’s a waste of resources and time and money, and more importantly I think it actually stunts, and has stunted over the last 10 years or so, the medium of video games. Sort of at our own peril.

And to be clear, I’m not talking about player-authored stories, and if you don’t know what that means, it’s kind of a buzzword these days amongst designers, but basically, a player-authored story is something… I mean, the best example these days is… Skyrim and Arkham City are wonderful, but you can also go down the chain of scope to a game like Angry Birds. A player-authored story is basically where the mechanics and the interactive is so compelling and so engaging that the player, by the very act of playing the game, creates a narrative in his mind. His play session is the story that he has created. And sometimes that gets shared on the internet, sometimes… I mean, if you play a game like Skyrim, I believe, you can literally, over the course of a weekend, create a novel-sized tome like Game of Thrones, literally of that quality sometimes. But even if you play, like, “Where’s My Water?”, it really is, whether you share it with friends or share it in your head or even if you’re not conscious of it, I think those kinds of stories are the heartbeat of our medium, and they are to be protected and supported and applauded. They’re wonderful.

And also… A lot of people hear me say this and they think I’m talking about a return to sort of old-school, Atari 2600 days. Abstract visuals and pure play mechanics. And I’m not talking about that either. I’m a huge believe in IP, I’m a huge believer in… I think our industry actually… I’m amazed every year when I look at the games we make, and I realize, I think, that our industry is probably the best and most vibrant IP creation medium that’s working today, in terms of the characters we create, the worlds we create for us to explore, for players to explore. And the context, and the stories, and the cutscenes. I’m not opposed to any of these things. I think when they serve as a nest, to protect and to house the actual gameplay. In fact, I think you really shouldn’t be making a game, no matter the scope, if you don’t have an IP. Because it’s important for branding, but more importantly, or maybe it’s really the same thing, it really is the first way that a consumer or a gamer connects emotionally with the product. So I am absolutely a big believer in IP.

I’m talking about two things. I’m talking about games that have been intentionally made, from the ground up, from the design document or the log line up, with the intent purpose of telling a story or expressing a philosophy or giving the player a designer’s narrative. That can sometimes be the entire game, or that can sometimes be a brilliant game, like Arkham City, which is one of my… I struggled when I was voting this year, between Arkham City and Skyrim… Where even a game like that, that is filled with opportunities for player authorship, sometimes goes a little bit, in my opinion, off the rails, and forces you into an area of storytelling, but not game-playing.

I’ll give you a really good example, at least, that worked for me, or didn’t work for me, that illustrates this point. If you played it, and I imagine everybody in this room has played that amazing game, the opening of the game is… If I remember correctly, you’re Bruce Wayne, you’re chained up, you’re a prisoner, you’re being sent to Arkham City, which is Gotham, but it’s been turned into a… You know the story. So he’s being led through, it’s beautifully executed, beautiful art. And you’re chained up, so you can’t do anything. All you can really do with the controller is look up, down, left and right. And the story is being told, and it’s… In my opinion, it was probably done in the service of the story, which is a great story. But I feel that in that case, we lost, or we… I didn’t make the fuckin’ game, but you know, we as game developers… They lost sight of the gamer mentality, of what they bring to a game and what they want from a game, and they let the desire to tell a story take over. Because ultimately, if you’re thinking at a pure mechanics level, it’s really not a lot of fun. You get home, you’ve spent 60 bucks, hopefully, not a buck at fuckin’ Redbox, you’ve spent 60 dollars on this thing, and you get home, and you sit down, and you go through all this stuff and you play it, and you’re like… All you can do is this, this, this, and this.

[Jaffe bobs his head up, down, left, and right.]

Now, a design argument can be made… Well, because right afterwards, Bruce Wayne breaks out of the chains and now he can fight. You could argue, “Well, yeah, we did that because when the chains broke, we wanted you to have a gameplay sense of all this ability rushing at you.” And I can appreciate the argument. But I think that the stronger probability is that that was just a good story setup, and they gave you a little bit of interactivity. And I think it came at the expense of the opening of that game, which then, crazily enough, is filled with brilliant, amazing opportunities for player authorship and wonderful in-game storytelling. So, now, look… There’s a lot of people who will tell you I’m crazy. Again, not just my mom is watching on GameSpot. I guarantee you, the comments are filling up. “Jaffe’s a fuckin’ idiot,” right? Because there’s a vocal community, and I don’t know how big they are, on the other side of this argument, that will tell you, “Cinematic storytelling and gameplay, that is the future.” And that’s why I called this “Chocolate and Tuna Fish.” Because a lot of people think it’s chocolate and peanut butter. They think, “Oh, take the movies and games and mush ’em together, and suddenly we’ve got the next big thing.” But I do think it is chocolate and tuna fish. They don’t fit. I don’t think they fit.