H1Z1 and Everquest publisher Daybreak Game Company is getting a new boss. 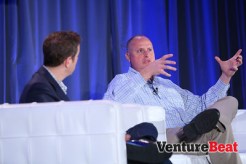 Above: John Smedley of Sony Online Entertainment at the GamesBeat conference in 2013.

John Smedley is stepping down as president and chief executive officer of Daybreak (the company that was once Sony Online Entertainment), the publisher confirmed to GamesBeat. Current chief operating officer Russell Shanks will step in as the new president of the company.

The CEO’s departure comes in the wake of a cyberattack that took many of his company’s game servers offline. But Smedley, who helped pioneer the massively multiplayer online model and free-to-play strategy on home gaming consoles, also isn’t gone for good; he is planning to take on a different role at the publisher in the future.

“I can confirm that John Smedley will be taking some time off from the company for the near-term and transitioning to a different role to be determined,” a spokesperson for Daybreak told GamesBeat. “Upon finalization of his plans, further communication will be provided.”

This transition comes at an interesting time for the executive, the company, and the wider industry at large. Smedley most recently made headlines for threatening to sue Julius Kivimaki, a cybercriminal and member of the cybervandal group Lizard Squad. One of the crimes that Kivimaki was partly responsible for was a bomb threat that grounded a plane that Smedley was flying on. Earlier this month, Kivimaki was convicted of more than 50,000 counts of computer-related crimes in Finland, but he didn’t receive any jail time, only a two-year commuted sentence.

Outraged by the perceived lack of punishment, Smedley took to Twitter to tell Kivimaki that he was “coming for” him.

While many fans of Daybreak games celebrated Smedley’s response, his actions also painted a target on his and his company’s backs. And on July 9, the remaining members of Lizard Squad began assaulting Daybreak servers with a distributed denial-of-service (DDoS) attack, which overwhelms a target network with junk data. This took games like H1Z1, Planetside 2, and more offline. So as Smedley takes time away from Daybreak, he is also potentially getting some space from the Lizard Squad harassment group.

But the former executive’s successful history in the games industry is about much more than stories of cybercrimes and DDoS attacks.

Smedley came to prominence in the mid-1990s when Sony put him in charge of its Sony Interactive Studios America (SISA) development team. He was charged with the creation of a role-playing game that would enable people to go online to adventure together at the same time. That project would eventually turn into EverQuest, which many consider as the game that truly kicked off the massively multiplayer online revolution.

In 1999, Verant Interactive (which formed after SISA spun off a few studios), Smedley finally launched EverQuest in partnership with Sony. It immediately exceeded expectations, both in financial and critical terms. The MMORPG won numerous awards, and it brought in hundreds of thousands of subscribers.

Over the next decade, Smedley would continue his work at Sony Online Entertainment and help the studio publish major MMOs like Star Wars: Galaxies, EverQuest II, and The Matrix Online. While those games were able to generate some excitement, SOE quickly lost the title of MMO king when publisher Blizzard Entertainment launched World of Warcraft in 2004. For years following the release of that game, most SOE MMOs (and MMOs from other companies) have been unable to match Blizzard’s success.

But SOE never disappeared — and it even managed to carve out a substantial niche over the last half decade. And that is directly attributable to Smedley, who started trying to turn SOE into a new direction in 2007. He started asking his development teams to think beyond the traditional MMO players and the subscription-based payment model.

Smedley’s early efforts started the effort at SOE that would publish successful games like DC Universe Online (a comic book-themed MMORPG), PlanetSide 2 (a shooter MMO), and H1Z1 (a zombie-survival MMO). The company is preparing to release a new EverQuest game that has fans of that classic franchise excited.

Then, in February, Smedley guided Sony Online Entertainment during its transition to Daybreak Game Company. The private-equity group Columbus Nova purchased SOE from Sony to operate the publisher as an independent company.

And coming out of that acquisition, Daybreak was looking strong. The aforementioned games like DC Universe Online and PlanetSide 2 were not only performing well on PC, but they have found renewed audiences on the PlayStation 4 console — a significant achievement for free-to-play games. And H1Z1, which is still in its “early access” phase, is growing larger.

And Smedley was hands-on and trying to make a better product right up until he stepped down. His last tweet before taking his time off was about fixing his zombie-survival game.

H1Z1 players will be happy to know we nailed the memory leak that's been plaguing us for a while. next patch.