If you’re picking up a PlayStation 4 on its Nov. 15 launch, DC Universe Online would like for you to give it a chance. The massively multiplayer superhero game is undergoing over 2,000 changes in its most recent update, all of them focused on making the virtual world feel new.

All 2,000 changes in the upcoming update 31 come directly from three years of community feedback. If you’ve always disliked how the chat system worked on PlayStation 3, something’s being done about that. If you noticed that acrobat-type characters had difficulty climbing certain buildings, well, many of those buildings are undergoing redesigns to make them easier to interact with.

Update 31 is more of a soft relaunch for DCUO than an update. Sony Online Entertainment isn’t just enhancing the appearance for PS4 players, they’re combing over every aspect of the game to make it fresher and more accessible. In so doing, they might just lure players that took a break from the MMO in the last three years back to check out environments with greater depth and better leveling mechanics.

Alongside the update, SOE is also releasing a companion app for iOS and Android that offers access to DCUO forums and guides and can even check up on what others are doing without having to log the game first.

I interviewed DCUO senior creative director Jens Andersen about these changes and how they might appeal to players (like me) who stepped away.

GamesBeat: How do you hope to appeal to players who might have taken a break from DCUO who might also be considering a PlayStation 4?

Jens Andersen: We have different strategies for player reacquisition versus acquisitions. A lot of times, people will go to school. We have a very young demographic, and they need to take time from the game for that. We definitely get people who are true loyalists and others who play different games for a while before coming back to DCUO.

For new players, and those interested in returning, we offer an ultimate edition of DCUO that allows players to buy all four [downloadable content packs] at a reduced rate. Once you get to level 30, you’ll already have the new DLCs waiting for you. Plus, the DLC offers new options in the character customization.

GamesBeat: How will the PlayStation 4 launch affect players?

Andersen: We have a lot of our loyal players on PS3 who will be upgrading to PS4. We also know that with DCUO being in the PS4 launch window, we’re going to get a lot of exposure as a free-to-play title.

Players will be able to transfer their existing account to  the PS4. Everything transfers when you log into your account on the new console. PS3 and PS4 players will also be sharing the servers.This means that if you’re a character playing on PS3, you can still play with your friends on the PS4. People won’t have to make the tough choice to keep their PS3 plugged in just to keep playing DCUO.

GamesBeat: What changes are coming to DCUO in update 31?

Andersen: We looked at the opportunity to go to the PS4 as a relaunch of the game. We’ve had almost three years now to gather feedback from players who originally bought the game or came in when it went free-to-play  who have given us feedback on what they like and didn’t like about the game. We addressed over 2,000 points of feedback in-game update 31, so it’d be difficult to list them all here.

We involved engineering to tweak game mechanics and also redesigned how loot drops and characters level. The biggest change, however, is that the art team went through and upgraded all the original PS3 assets for the new PS4 environment.

Update 31 is full of improvements to almost every part of the game and all of it is based on community feedback. We wanted new players to feel at home when they tried out DCUO on PS4 and offer graphical updates for returning players.

GamesBeat: What are a few of the technical changes in Update 31?

Andersen: Update 31 has two levels of graphical updates. On PS4, you’ll notice a big difference between it and the PC and PS3 versions. We’ve always had a limiter on what the PS3 could handle and had to make a few compromises at launch because of that. Exclusively on PS4, we’re taking all the assets and enhancing or “up-rezing” them. PS4 players will definitely notice a difference.

All platforms will notice that the in-game areas are more immersive, and better detailed. Much of the buildings and terrain have been remodeled. It’s important to stress how much we value the community’s feedback. Their comments make DCUO a live service and help us focus on upgrades players want.

I think people are really going to be excited. We also made major improvements to messaging and powers. This is the biggest update we’ve ever done.

DCUO on PS4 will also support remote play, meaning you can play the game through the Vita as well! 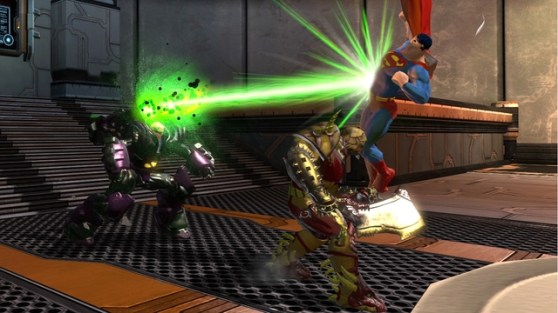 GamesBeat: Along with update 31, you’re also releasing a companion app. What can players use it for?

Andersen: The DCUO companion app can access the social media forums, guides, and information from the game’s database remotely. You can check on your characters, see what items they have equipped, check story progress and see what friends are doing/wearing. Players might also get some ideas on where they want to take their characters and events they want to participate in.

You’ll also be able to see the loot, items, and rewards available in the game and look them up in the data base. It’s also a central hub for accessing all our social media. You’ll be able to check out all the things the community is offering and keep track of game news in one place.

GamesBeat: When will update 31 roll out?