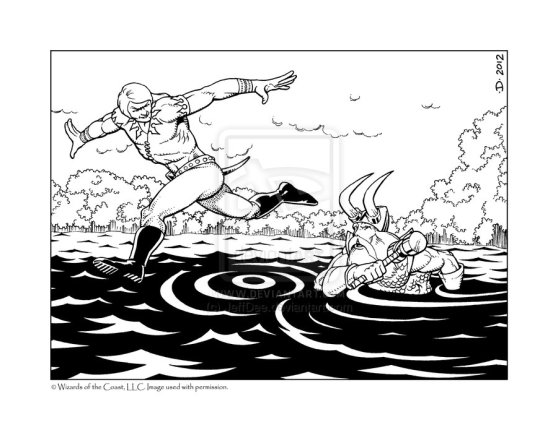 Kickstarter not only brings new gadgets to life, it can also resurrect the ancient gods.

Jeff Dee, one of the artists who contributed to the amazing and eclectic Advanced Dungeons & Dragons tome Deities and Demigods in 1980, is re-creating much of the art from that book.

Why? Somewhere along the line, it appears that a worker at TSR, which published the AD&D books, chucked the original drawings in the trash. As Dee explained in an email:

I don’t know a lot of specifics about exactly how my artwork in TSR’s files got destroyed. The basic story I hear is that someone in the art department decided that they needed more room in their files, and so they took a bunch of old artwork that wasn’t “needed” any more and threw it in the dumpster. It wasn’t just my art that was affected: Tons of work by Diesel and Erol Otus was also thrown away. And maybe more than that, but those are the only other artists who’ve confirmed to me that their work got destroyed.

Now, this isn’t a travesty on the order of the Taliban’s destruction of the Bamiyan Buddhas. But for those of us who grew up with D&D, it’s a bummer. The original Deities and Demigods, with its rich and imaginative panoply of world religions as seen through the lens of horny, role-playing teenagers, was a stellar introduction to the varieties of religious and mythological imagination. For me, Deities and Demigods was the starting point of a straight line that led to my study of comparative religion in college and grad school. Of course, actual religions have very little to do with Dee’s and Otus’s vision of them, but who really wants to quibble when Odin looks so badass?

Dee decided to make it right and redraw many of his works from that tome. Working from the reproductions in the book, he’s been re-creating sets of these drawings and selling them for $300 to $500 apiece, helped along the way by a series of Kickstarter projects. The most recent one closed this week, having raised about four times more than its $1,000 fundraising goal.

Dee figures that his drawings accounted for about an eighth to a fifth of the D&DG book’s art.

“My drawings were the ones signed with the little -D-.”

If you want to purchase an original Jeff Dee drawing or a print, he’s got an order form (.pdf). Or check out the gallery of Dee’s drawings on his DeviantArt site.

Image: Drawing by Jeff Dee of Loki and Thor, based on the D&DG original. Used by permission.