Many horror nerds dream of fighting solo though the zombie apocalypse, but Xbox One launch title Dead Rising 3 makes it clear that a friend can be your greatest asset.

More than all the guns, all the blades, all the explosives, and all the delightful murder machines you can craft with DR3’s new on-the-go combo system, the SmartGlass companion app for smartphones might be the most useful tool that the game has to offer.

Dubbed the “Zombie Defense and Control PDA” (or ZDC PDA) for short, it’s an ingenious way for someone to backseat-drive you through the really tough spots.

Our demo at Microsoft’s Xbox One preview showcase in San Francisco proved that much early on, with the first section putting main character Nick Ramos on a hunt for Zombrex at a far corner of the ruined Los Perdidos streets.

It didn’t take long for me to get in trouble. After combining a motorcycle with a portable grill to make a rolling sort of turbo-charged mini zamboni (the Rollerhog), a wrong turn crashed my ride and left me stranded on top of a nearby delivery truck, swarmed by flesh eaters. 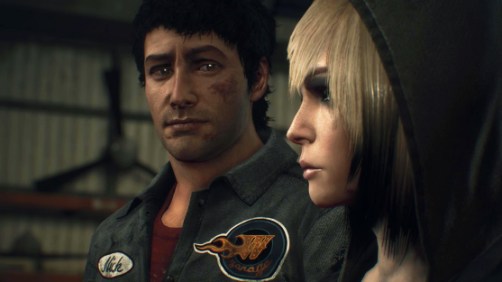 Above: Dead Rising 3 has a solid-looking single-player mode, but it’s really a two-player mission just waiting for a friend.

Luckily, my demo partner was quick with the SmartGlass app, using his phone to set a waypoint on the map and guide me toward a nearby safe house that I didn’t even see in the background. Crisis averted, for the moment.

In time, I came to rely on those green icons in a panic, since they smartly simplified the problem of trying to figure out verbal instructions while knee-deep in zombie limbs. At one point, I couldn’t even figure out how to scale a building for rooftop access, but a simple waypoint marker with the PDA immediately helped me find a nearby truck to drive over for the added boost.

It’s especially useful when your partner knows the terrain, since the map data can also point you toward weapons, stores, and other useful areas that you might miss on a first pass. Even random items are easier to spot, with the app able to search and pinpoint various knick-knacks by type in real time.

But aside from guiding the directionally challenged, the PDA is also just as useful for bailing you out in a fight.

One of the best weapons available to you is undoubtedly the airstrike call, which carpet bombs your immediate vicinity when prompted. Of course, you’ll have to get clear and find cover, but it’s a valuable Hail Mary if you’re out of weapons and surrounded by hundreds of rotting walkers. Without a second player, you’d just be dead on your feet.

In one such circumstance during the game’s fifth chapter, my partner and I had exhausted the airstrike option and still found ourselves surrounded on all sides, so he used the PDA to call in another survivor as backup. It was short-lived, since our new character got swarmed and eaten rather quickly, but the breather was just enough to get us out of trouble and into a nearby sedan.

Another crisis averted, thanks to the PDA.

Realistically, my twitchy trigger fingers would’ve gotten me killed over and over without the demo’s “God Mode,” but even without it, I feel like I could’ve muddled through with my teammate. Dead Rising 3’s just far more manageable with a buddy following along on SmartGlass behind you.

It’s a happy circumstance of the influence from mobile gaming. That kind of gadget integration is actually a really smart use of platform exclusivity and resources from both developer Capcom Vancouver and publisher Microsoft Studios, turning a standard single-player experience into a more exciting two-player session.

It’s just plain better to have a friend watching your back, and it’s good that Dead Rising 3 lets you have that option. At the very least, I know that I’ll be getting someone to lend me second-screen support. Apparently, I can’t drive, navigate, or fight for beans when zombies are involved.