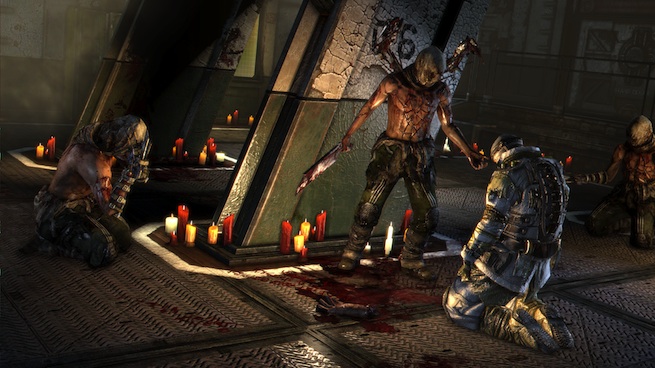 Warning: I talk about some of the events from Dead Space 3’s ending.

Isaac Clarke continues to have the worst luck of anyone else in the universe. Visceral Game’s Dead Space 3 brought him to hell and back as he tried to get rid of the deadly Necromorph creatures for good. But as you can see with this new piece of downloadable content (DLC), it’s clear he failed.

Dead Space 3 Awakened (out on March 12 for Xbox Live, PlayStation Network, and Origin.com) extends the third-person action-horror experience with new chapters that occur immediately after Dead Space 3’s ending. You can find out what happened to Isaac and his partner John Carver either by yourself or with a friend in cooperative multiplayer. Your guns and items will carry over from any Dead Space 3 save files you may have.

The small sliver of Awakened I played felt like a standalone horror story, complete with unstable characters, a supernatural threat, and all the gruesome gore you can take. It’s as if Visceral took the horror elements of what initially made the franchise so great (and which was noticeably absent from the latest game) and packed it in all at once into Awakened.

But first, I’ll give you the bad news.

I’m concerned with how much Awakened recycles levels from Dead Space 3. I didn’t expect this DLC to suddenly explode with entirely new content, but I also didn’t expect to see the Terra Nova. That ship served as the primary setting for the first act of Dead Space 3, and after exploring every part of it, I wasn’t happy to find myself back there again. 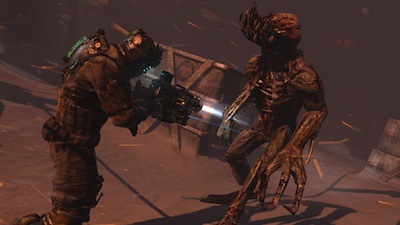 Though Awakened will also feature brand new areas for Isaac and Carver to yell at each other over, the portion I played (a little over 20 minutes worth) was all about their return to the Terra Nova. But it isn’t in the same shape you left it. The remnants of Jacob Danik’s men — religious extremists from the cult of Unitology who were chasing you in the main game — have taken it over and turned the broken vessel into a sort of church … a church where they cut off body parts to serve a being they call the Voice.

As I walked around the familiar layout of the ship, I noticed that the new church appeared to have hired a rather eclectic interior designer with a love for the macabre — I found dozens of lit candles and severed hands at nearly every dark corner. I saw ominous messages scrawled in blood on the walls. And dead Necromorph corpses (pictured below) were strung up in a Christ-like fashion, as if to serve as a make-shift altar.

Was it creepy? Sure. But I couldn’t get over the fact that I was still blasting Necromorphs in the Terra Nova. 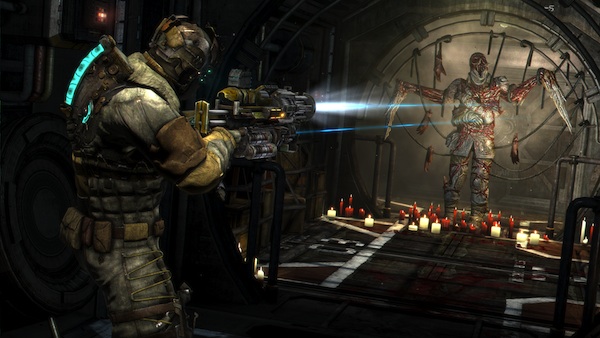 A return to form?

One of the highlights of Dead Space 3 was John Carver’s story, which you can only see if you play co-op with someone else. Carver’s mind slowly unraveled during the campaign as he experienced hallucinations about his dead family. Eventually, this led him to see objects in a level — toys, family portraits, birthday gifts — that Isaac (and the other player) couldn’t.

In terms of the fiction, Carver was suffering from dementia because of mysterious alien-made obelisks known as Markers. Isaac also suffered from this dementia in the first two games, but he became immune to it at the end of Dead Space 2.

The ending of Dead Space 3 changes that. The events there have somehow reset Isaac’s mental stability, and now both he and Carver suffer from dementia (and thus see different things). In the chapter I played, Isaac kept having visions of someone chasing him — a mutilated figure brandishing a cleaver (pictured up top). This mysterious person couldn’t take any damage, but he could hurt you and bring along a few Necromorph friends to attack you as well.

At certain points during the mission, he’d show up some distance away from me, just at the corner of my eye, and quickly disappeared when I tried to focus on him. It was also easy to mistake him for his followers, who wore bags over their heads and had sharp, metal contraptions in places where their forearms and hands should have been. Visceral Games wasn’t kidding when it said Awakened will have “the most disturbing content” it has ever put in a Dead Space title. 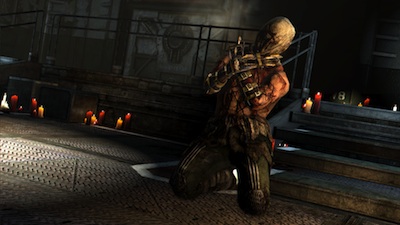 Sometimes, these poor saps — you’ll hear their rhythmic chants about sacrificing their eyes, ears, and minds — are just an innocuous part of your visions; but in a few areas, they actually fight you. It was difficult to tell whether the battle was really happening, or if Isaac was having another mental breakdown.

Either way, the demo was enough for me to see that the Necromorph situation had only become worse, and not better, after Dead Space 3. After what the characters went through in that game, this narrative twist might seem like a cop-out. But if this means Awakened can successfully bring back the scares again, I don’t mind it one bit.