Defiance was one of the most ambitious online games conceived by a startup. Trion Worlds launched the game to mixed reviews in 2013, and the SyFy television network aired a Defiance TV show in tandem with the game for three seasons. SyFy canceled the show in 2015, but the online shooter lived on.

Today, Trion Worlds announced it will create a new experience, dubbed Defiance 2050, to reimagine the shooter. It will launch on PC, PlayStation 4, and Xbox One this summer. It will take the story and gameplay of the original and give it a major overhaul.

In the new story, 20 years have passed since the catastrophic Arkfall event left millions of alien Votans dead and Earth terraformed into a nearly unrecognizable postapocalyptic landscape. In Defiance 2050’s version of San Francisco, players explore an open world, where they can fight in skirmishes and take on story-driven missions. The big battles were always one of the most touted features of the original, where players had to band together to destroy huge creatures. 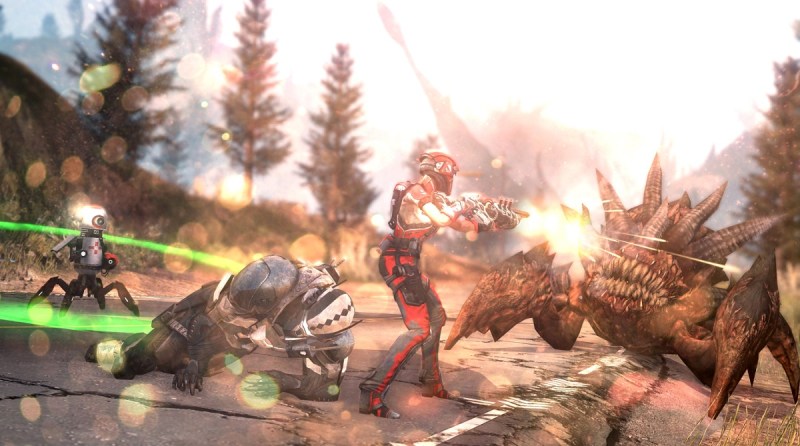 Above: Defiance 2050 has those same crabby monsters.

In the Defiance 2050, players will again engage in massive cooperative battles with their friends, use hundreds of weapons and skills, and take on huge alien threats as they explore this transformed future Earth.

Defiance 2050 re-creates the original environment, and it will use graphics that fit the PlayStation 4 and Xbox One. It will have updated textures and other art assets, along with other improvements that come from what Trion has learned about making games since 2013.

“Defiance 2050 has been created with the original game’s community in mind,” said Matt Pettit, the producer of Defiance 2050, in a statement. “The team has been listening to feedback and taking some helpful cues from fans to really create the Defiance experience that people have wanted for a long time. Defiance 2050 marks a shift for the game that goes beyond the change from the year 2046 to 2050, and we are absolutely thrilled to hear what people think of it.”

Prior to launch, Defiance 2050 will be entering a closed beta period that interested players can sign up for and receive more information on in the coming months. The team will take player feedback into account before the launch.

Trion Worlds has other successful games such as ArcheAge, Atlas Reactor, Rift, and Trove.