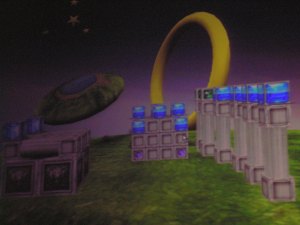 Sim Ops Studios debuted a cute tool for creating 3-D games in a web browser. The Wild Pockets platform gives ordinary users the tools to create their own 3-D games in a social way.

You can create a game by dragging and dropping objects into a 3-D world. You can choose what the environment looks like and include generic objects from a library such as guns that discharge particles. You can also import pictures such as an image of your boss. That’s cute.

It’s been done before. Microsoft has a technology called PopFly that uses its Silverlight technology. Electronic Arts also has a SimsCarnival site where you can create your own game. Shanna Tellerman, chief executive of Sim Ops Studios, notes that both of those are focused on 2-D animation, not 3-D, and don’t feature realistic physics like her company’s tool.

And Microsoft’s Xbox division has released tools for more professional designers to create Xbox 360 games. Other rivals include SceneCaster, Metaplace and Instant Action.

This San Franciso company has a much simpler tool, but with a new twist. You can start building a game world and your friend can log in and join you. As you place objects in the world, your friend can do the same. The technology is not aimed at hardcore console gamers but rather casual players on the PC. On stage, the company showed how two players could create a goofy game within two minutes.

Once you’re finished, you can embed the game on any web site. The company is releasing its developer tools today and expects a full launch in early 2009. The company is privately funded with angel money and it spun out from Carnegie Mellon University. It has nine employees.

The site is in a closed beta now and will be open to the public next year. Tellerman said the company is starting to engage with game developers but could not name any yet. She said the company has begun looking for a first round of capital.