The first thing that strikes you in Demon’s Souls isn’t the business end of a bastard sword, but the PlayStation 5 launch title’s stunning visual presentation.

You might not expect a cursed kingdom consumed in thick fog to be the ideal showcase for the new system’s graphical prowess, but I’d argue its default murkiness makes the eye-pleasing details pop even more. Whether seeing its detailed environments staring back at you from a muddy puddle or watching a torch’s flickering flames dance against a dimly lit dungeon’s walls, you’ll continually be amazed by how beautiful this brutal world from developer Bluepoint Games is.

But pretty ray-tracing effects are far from the only way the remake’s harnessing the PS5’s power. The platform’s DualSense controller’s also pulling its weight to immerse players in ways the 2009 original couldn’t dream of. The combination of haptic feedback and mic-delivered audio cues inject a number of nuanced layers to almost every action. Sure, all the expected effects accompany the sword-clashing combat, but the tech goes so much further than that. Follow a well-timed parry with a deadly riposte and the sensation of your rapier entering a foe’s throat feels – and sounds – different than its blood-soaked exit.

Of course, spend too much time marveling over the game’s capability to sting your senses, and you’ll soon find one of its bosses flossing its teeth with your spine. Demon’s Souls has been rebuilt, but the overhaul hasn’t come at the cost of the original’s brutal difficulty.  That said, the PS5 upgrade does bring some fresh features that help smooth the steep challenge a bit. Call up the system’s Activity bar, and you have immediate access to helpful videos, without leaving the game. The short clips – nearly 200 of them – can even be pinned to the side of your screen, allowing you to watch while you’re playing. 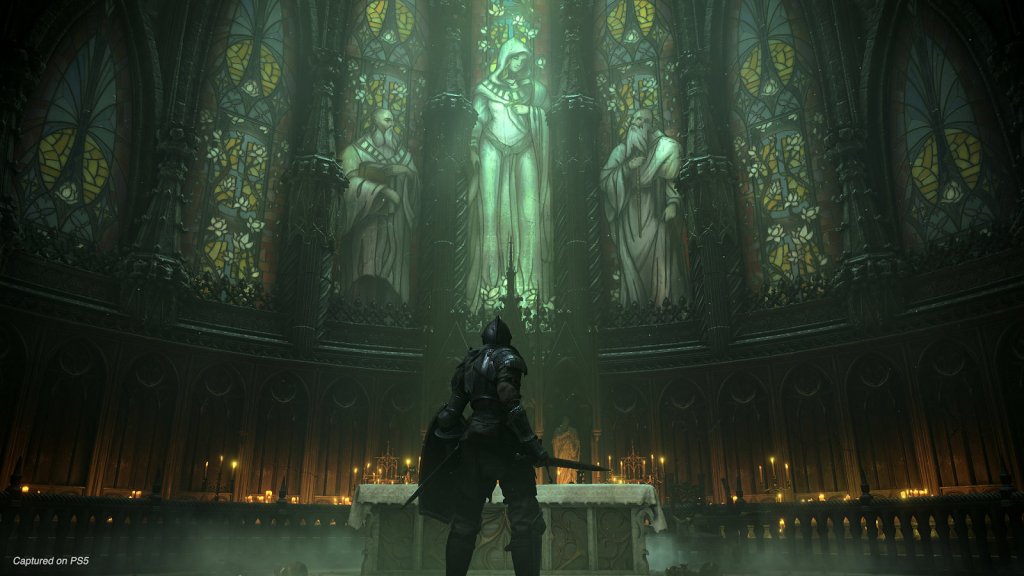 Above: Gothic and pretty.

Additionally, those sounds coming from the controller’s mic can tip you off to a hidden threat’s location or an unexpected attack from behind. Best of all, the PS5’s snappy load times ensure you won’t be making sandwiches or taking bathroom breaks between deaths. Tolerating long stretches on the trial-and-error treadmill is much easier when most of that time is spent actually playing rather than staring at loading screens.

While some of these additions and enhancements help soften the blow of the game’s player-punishing encounters, it still takes good old-fashioned practice and perseverance to cleanse the Kingdom of Boletaria of its demonic beasts and suffocating darkness. Thankfully, it follows the original’s tough-but-fair template, retaining the foundation that helped establish and define the Souls-like subgenre. Whether you’re finally learning the ins and out of a labyrinthine, trap-filled level or slaying a screen-swallowing monster after dozens of attempts, seeing your dedication and determination pay off is extraordinarily rewarding.

But it’s not just the major accomplishments that fuel this satisfaction. Even minor victories –  like discovering how to parry a low-level enemy’s attack that’d previously left you mourning your maxed life meter – can make you feel like you’ve conquered the world. Demon’s Souls is brimming with these moments, providing seemingly endless opportunities to make you feel as though you’ve scaled a previously impassable mountain.

All that said, not everyone will appreciate how blatantly it flaunts its difficulty. While even complete newcomers are likely aware of the game’s reputation for repeatedly bringing players to their knees in combat, they may be surprised to discover that absolutely nothing comes easy in Boletaria. 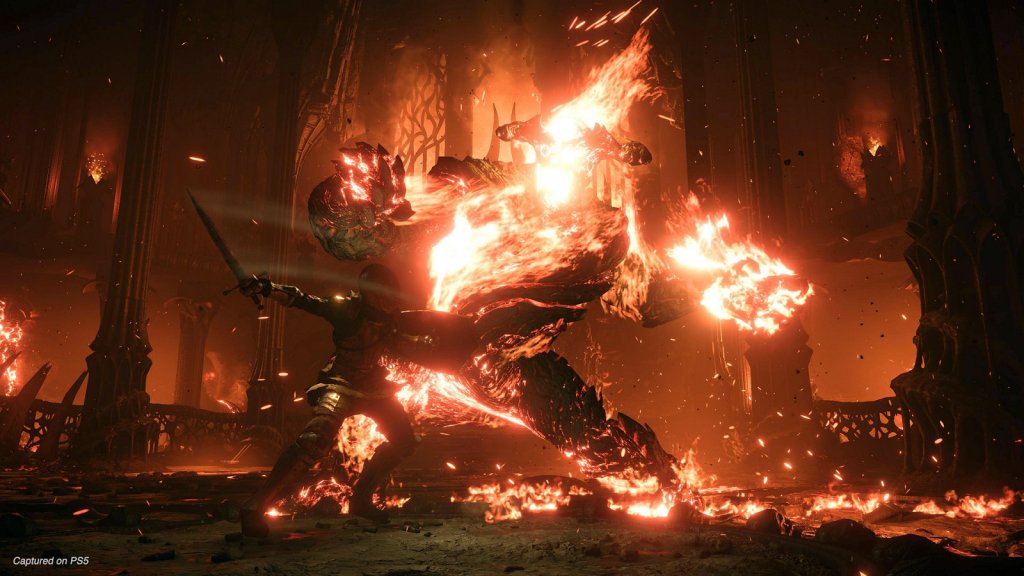 Above: He’s on fire!

Beyond teaching the basics at the start of your adventure, there’s no tutorials to speak of. Items in your inventory often come with vague descriptions, and even an act as simple as leveling your character has its own hurdles to overcome. The latter is usually a time to celebrate your victories in other games, but it’s something you need to suss out in Demon’s Souls. It’s not especially trying, but if you’re expecting a chatty vendor or buxom barkeep to welcome you with open arms and a clear explanation of how to up your stats, well, you’re in the wrong role-playing game.

Demon’s Souls is both a fantastic game and a stunning showcase of the next-gen console’s capabilities. And while it’ll serve as the perfect launch title for many, I’m hesitant to wholeheartedly recommend it to everyone that picks up a PS5. Its rewards are immense, but for those unfamiliar with the genre or craving some stress-free fun on their new hardware, I wouldn’t bet against the smile-inducing thrills that come with swinging through NYC as Miles Morales in Spider-Man.

If you’re a seasoned Souls-like fan, then it’s worth picking up a PS5 just for Demon’s Souls. If not, I still recommend having your passport stamped in Boletaria, but know what you’re getting into beforehand and proceed with caution … and plenty of Moon Grass.

Demon’s Souls is out now for the PlayStation 5. The publisher sent us a code for this review.