DeNA and its American subsidiary Ngmoco announced today they have launched the Mobage mobile social network in English-speaking territories around the globe.

The Mobage service sits on top of Google’s Android operating system and essentially creates a portal and social network for games. The service is a platform for developers to deploy their games so that they can be discovered and shared by mobile game users. Already launched in Japan, Mobage is generating $1.3 billion in revenues for DeNA. By taking it worldwide into the Android market, both DeNA and Ngmoco hope the platform will be even more lucrative.

The two companies have been working on the next-generation mobile social network since Tokyo-based DeNA acquired San Francisco-based Ngmoco in August for up to $403 million. DeNA’s Japanese-language Mobage service has 30 million users, who largely play on feature phones. Combined with Ngmoco’s ngcore technology, Mobage is now refashioned for the English-speaking smartphone gamer. 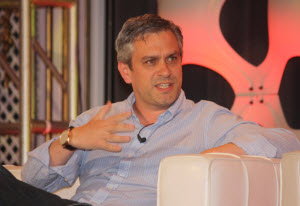 Overall, Mobage is now available in Android markets in the U.S., China and Japan. It competes with Gree/OpenFeint, Apple’s Game Center, and upcoming social networks such as Facebook’s next-generation mobile technology and Electronic Arts’ Origin service.

But Mobage is ambitious in that it isn’t limited to just a single platform and it seeks to unite gamers in a worldwide network. In such a network, gamers can make friends with anyone, purchase virtual currency to buy goods in all sorts of games, discovery new games to play, and compete in competitions. It’s sort of like a Facebook for games on top of Android phones.

“Mobage’s release outside of Japan marks the next step in our company’s global expansion,” said Neil Young, CEO, of Ngmoco and executive officer of DeNA. “The opportunity in front of us is to build Mobage into the definitive destination for games and entertainment
across territories and mobile operating systems.”

At our GamesBeat 2011 conference in San Francisco two weeks ago, Young said that Mobage is a social network built around common interests, or an interest graph, rather than the social graph of Facebook. People who like the same games can meet each other and communicate within the Mobage network.

The companies said there are more than 100 social games already in development for Mobage, many of them debuting on Android for the first time. Isao Moriyasu, president of DeNA, said that Mobage aims to unlock the huge potential for social games on smartphones.

Players can log into Mobage with a single identity that stretches across their games. Developers can use it to reach a global audience with simplified payment solutions and a common virtual currency and ad network. Supporting games include Zombie Farm from The Playforge, Pocket God by Bolt Creative, Haypi Kingdom from Haypi Co., Pocket Frogs by NimbleBit, Paper Toss by Backflip Studios, Touch Hockey from Flipside5, Zoo Land by RockYou, Putt Putt Penguin from OMGPOP, Sundae Maker by Sunstorm, Texas Poker from KamaGames, Solitaire from MobilityWare, as well as hit games Tap Town from Gameview and We Rule by Ngmoco.