Here's a puzzle for you: How do you combine two series of games where logic is everything without tripping over the convenient coincidences and gaping plotholes that plague your average crossovers? 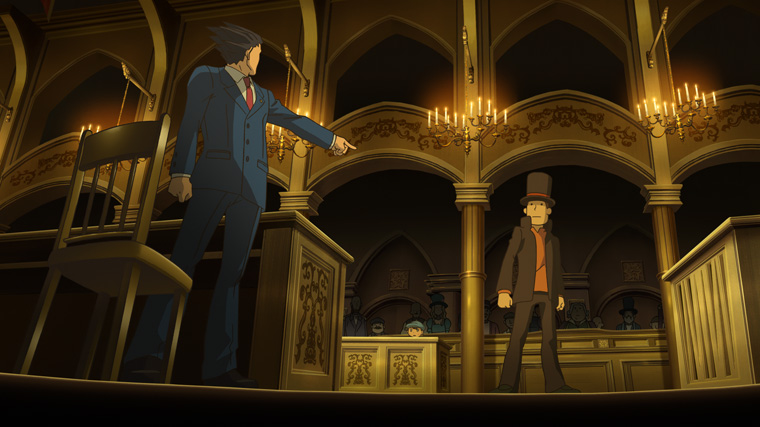 Professor Layton Vs. Ace Attorney, the combination of the level-headed Hershel Layton and the truth-seeking Phoenix Wright, sounds like a perfectly logical idea at first. Both characters spend most of their time questioning locals and gathering clues in a first-person perspective before delivering dramatic climaxes via gorgeous artwork. Total strangers call upon each to solve bizarre mysteries and devious puzzles. They both have young sidekicks with unique talents. Most importantly, they require the player to constantly think outside the box.

Despite these similarities, however, the characters themselves, the worlds they investigate, and the way they approach mysteries are almost nothing alike. That's where the biggest puzzle of all comes in. How does Shu Takumi, director of Ace Attorney and main scenario writer for Professor Layton Vs. Ace Attorney, unite these two different worlds?

You start with a murder, of course.

A game can't have "Ace Attorney" in its title if it doesn't begin with a murder, but already the two series are butting heads.

In the Professor Layton series, you can usually rest assured that any death you witness is a clever ruse designed to frighten Layton and fill the player with a sense of urgency. Chances are, the "victim" is actually a robot, in a deep sleep, or faking his death in some contrived attempt to gain the upper hand. Layton is usually shocked at first, but his skeptical mind is constantly at work searching for the truth behind every odd circumstance.

Phoenix Wright, however, encounters real, permanent death nearly everywhere he goes. Murder is the common thread tying together every case in the Ace Attorney series, even those that begin as a lesser crime. Eventually they all come to revolve around a murder so bizarre that only Phoenix can solve it. Furthermore, death in Ace Attorney is often violent and bloody. While people simply keel over in front of Layton, killers usually shoot their victims in the head or stab them in the chest in the adjacent room to Phoenix.

This is Takumi's first task. Professor Layton Vs. Ace Attorney needs to begin with a murder to add the sense of importance that both series require to motivate the player, but which route does he take? It's hard to imagine an actual death in a universe Layton occupies. Witnesses withholding critical evidence because "this murder reminds me of a puzzle" wouldn't mesh with the Professor's charming world. Likewise, it wouldn't be a stretch for someone to stage a murder or rise from the dead in an Ace Attorney game. It's been known to happen from time to time.

Magic is another concept where the two series differ. Like death, the supernatural is something Layton can always explain away through the most convenient and baffling of circumstances. The man once unraveled a particularly perplexing mystery by revealing that he and his friends were all high on fumes. Of course, being the gentleman and scholar he is, Layton made it sound much more rational.

Like murder, though, the supernatural is both very real and very important in Ace Attorney. The main story arc running through the original trilogy concerns spirit mediums who can channel the dead and possess the living. Phoenix's assistant Maya uses her powers to contact the lawyer's dead mentor in the middle of trials, and prosecutors even discuss the details of spirit channeling with the judge to convict defendants of murder. Everyone is a bit skeptical at first, but they eventually accept that this magic is real and treat it like any other evidence.

The early trailer for Professor Layton Vs. Ace Attorney features a villain named the Storyteller, a man who creates the world around him by writing in a magic book. If this were Professor Layton and the Magic Storyteller, there would be no doubt that the villain's creations are merely holograms or another sort of ridiculous technology. If it were Ace Attorney: Witch Trials, though, the Storyteller's magic would certainly be real, and he would probably be related to Maya somehow. Again, it's hard to imagine magic existing in Layton's world, but if there was ever a time for him to actually encounter the supernatural, a crossover would be the perfect opportunity. 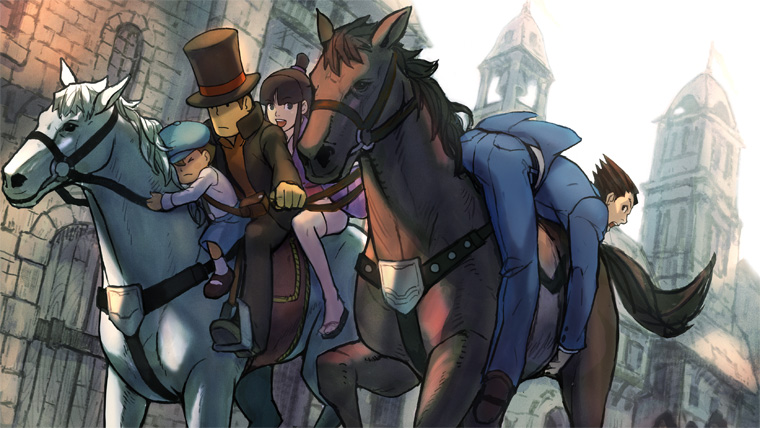 Crossovers are notorious for weak plots, but Professor Layton and Ace Attorney are already full of ridiculous scenarios. Fake towns, forged evidence, stolen identities, you name it, Layton and Phoenix have seen it all and explained it with logic that would only make sense in their own settings. Naturally, these two are the perfect mystery-solving duo for a puzzle-themed crossover. Takumi is free to create the most contrived plot he wants, because nothing is too crazy for these two super sleuths to solve.

So, how do you combine two series of games where logic is everything without tripping over the convenient coincidences and gaping plotholes that plague your average crossovers?

Trick question. Tripping is inevitable, so you do so with a smile on your face and enjoy the ride.