I’m not going to lie to you. I do not know what a Desperados is. The same goes for Desperados II, which I assume must exist. But I played Desperados III, and I like it.

If you’re as clueless about this series as I am, just know that Desperados III is a tactics game published by THQ Nordic. It is coming out for PlayStation 4, Xbox One, and PC.

Again, I had never heard of this franchise before. But it turns out I’m really into this brand of cowboy-flavored action.

I played Desperados III on PC at a pre-Electronic Entertainment Expo event in Santa Monica. The closest I can equate it to is something like Fallout Tactics. If you’re looking for an even nerdier comparison, I had flashbacks to Star Trek: Away Team (I bet not many of you remember that 2001 game). You control a small party in a top-down perspective, using their abilities to sneak your way through maps.

In the first level, I just controlled one guy. It was a kid, actually. His father would go ahead and do most of the dirty work, sneaking behind enemies and killing them with a knife. I would point-and-click my character’s way out of danger, sometimes throwing a coin to help distract enemies. It worked as a nice tutorial to ease me into the somewhat complicated mechanics.

Throwing coins to distract people may sound like pretty typical stealth stuff, but the cowboy flavor goes a long way. Outside of the Red Dead series, this still feels like an unexplored genre in gaming. It was nice to play such a hardcore tactics experience that wasn’t sci-fi, fantasy, or post-apocalyptic. 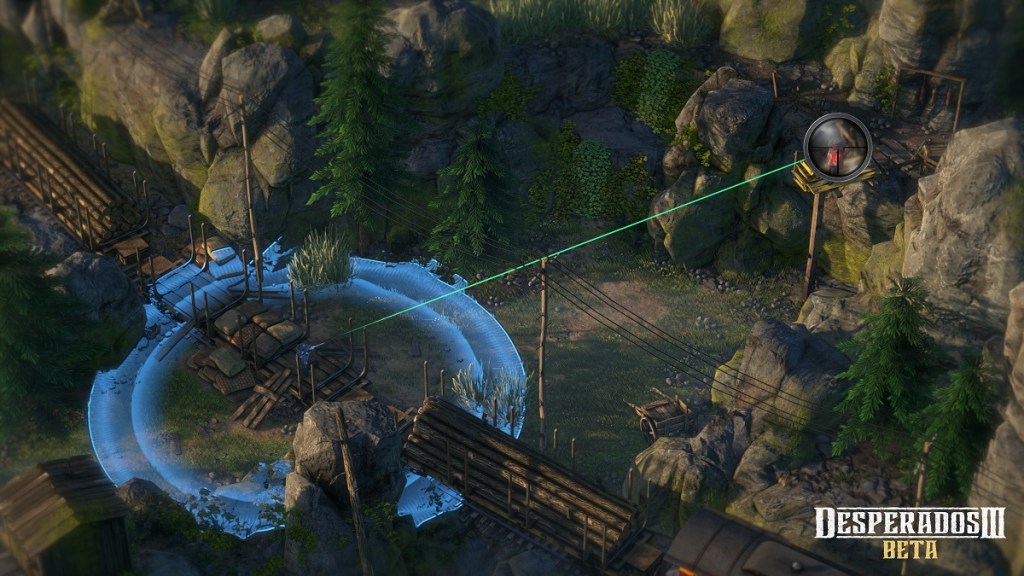 The gameplay portion picked up in the second part of the demo. I played as a gunslinger and a doctor working their way up a train mid-robbery. The gunslinger could shoot his pistols. I could even pause the action to pinpoint two separate targets to take out at the same time. But this would be noisy. I was better off finding sneakier routes, using coins and taking out enemies with my knife.

The doctor had a more specialized kit. He could also take out enemies silently, but he would use a syringe of poison. He could also throw his medical bag. Like with a coin, it would attract an enemy. But those enemies would then open the bag, releasing poison gas and knocking themselves out.

The level had a tight design that forced me to use both characters carefully. Vision cones indicated where my enemy could see, but I could still work my way around them by hiding in things like tall grass. And if I didn’t have enough cover, one person would have to distract an enemy or take him out while the other sneaks his way through.

I had never heard of Desperados before, but one demo later and I’m pretty excited for Desperados III.