Bungie today revealed plans for Destiny 2‘s second year, which includes a new expansion — Forsaken — for the PlayStation 4, Xbox One, and PC online shooter. It comes out on September 4.

Destiny 2 came out in September 2017 for PS4 and Xbox One, with the PC version following in October. It became a fast hit and ended up as the U.S.’s third best-selling game of the year, according to The NPD Group. Destiny 2 is a multiplayer role-playing game. It counts on having its audience play regularly, so new content — especially loot — is necessary to keep them engaged.

But players began complaining about a lack of content and bemoaned some of the changes from the original Destiny. These frustrations intensified after the December release of Destiny 2’s first expansion, Curse of Osiris, which they felt did not have enough content. Since then, Bungie has released has released roadmaps and content updates, notably the second expansion — Warmind — which came out in May.

The original Destiny followed a similar trajectory. It got off to a fast start in 2015, but its first two expansions underwhelmed until the third — The Taken King — came out about a year the base game debuted.

The new expansion takes players to The Tangled Shore, a part of Destiny’s asteroid-filled Reef. There, you’ll fight a new group of enemies, the Scorn. This includes the Barons, the big bads of the Scorn. Bungie describes them as a kind of reverse Magnificent Seven. The whole expansion will have a Western flavor.

Forsaken gives players more choices when equipping weapons. Before, weapon types belonged to certain groups, and each of your three slots were designated for one group. But now you can equip whatever you want in each, so you can run around with three shotguns if you choose. Forsaken also adds a new type of weapons, such as the bow and arrow.

Gambit is a new mode that has two teams of four fighting their own groups of computer-controlled enemies, but one person from your team can go invade the other. Forsaken also has a new Raid, the Dreaming City, which is the home city for the Awoken race. Meanwhile, a new Collections menu will help you keep track of collectibles.

Unlike The Taken King, Forsaken is not adding new subclasses, but current ones will get new super moves. Bungie will tell more about Forsaken’s story during the Electronic Entertainment Expo in Los Angeles next week.

For Destiny 2’s second year, Bungie is introducing an Annual Pass. Instead of focusing on expansions, this includes three content drops. 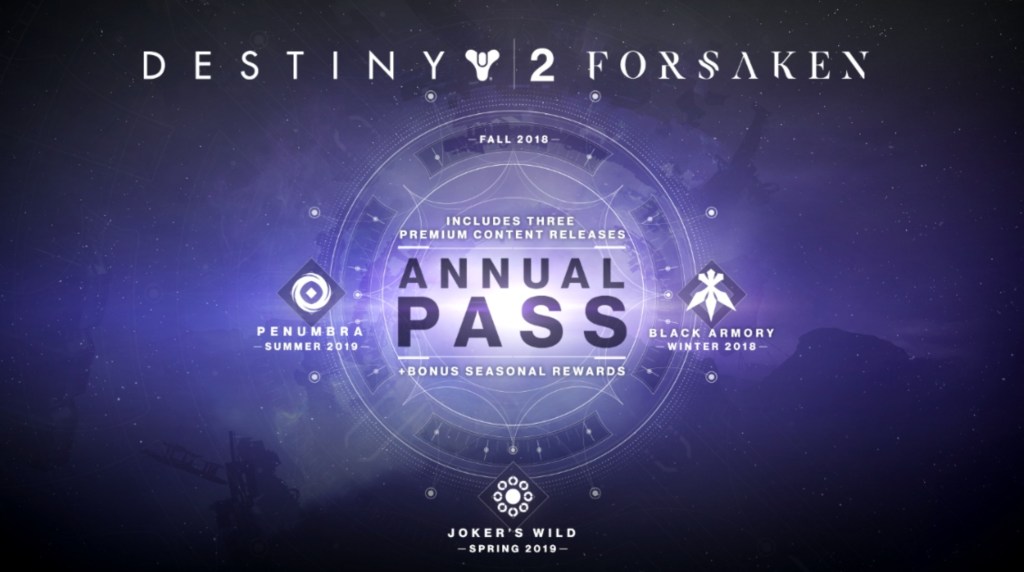 What’s the difference? According to Bungie, these will focus more on gameplay content and less on cinematics. So you’ll still get new weapons and stuff, but without the fancy cutscenes. Forsaken alone costs $40, but you can buy it and the Annual Pass together for $70.