Bungie made promises for Destiny that went unfulfilled for years, and clearly wants to avoid a repetition with Destiny 2.

Thursday’s gameplay reveal for Destiny 2 shared more than footage of updated graphics, fresh abilities, and new weapons meant to make the Destiny devoted drool. Bungie delivered a full-on preview that would have felt right at home at the Electronic Entertainment Expo (the big game trade show in L.A. each June), and showcased that the studio is attempting to avoid the mistakes it made on Destiny 1. Increased access to endgame content, making sure players have enough content to keep them busy, and a gripping story are Bungie’s priorities.

But not everything promised at an E3-style press conference is actually delivered when the game ships. Here’s what we hope Bungie delivers on, and where we still have room for concern. 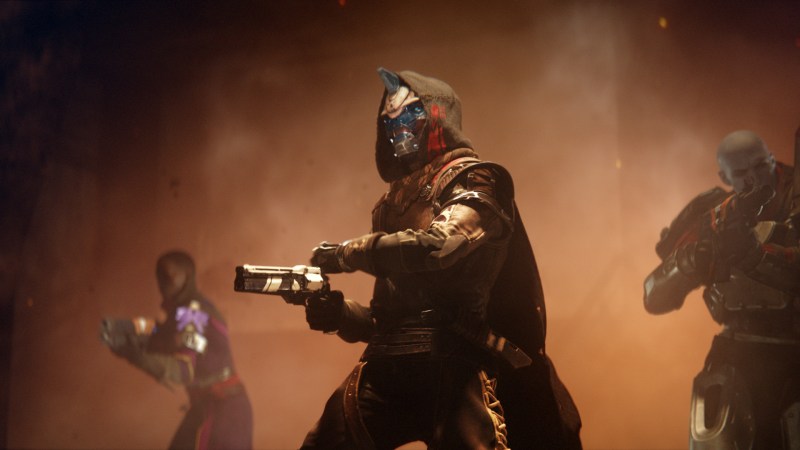 Above: Ikora, Cayde-6, and Zavala (left to right) are the stars of Destiny 2.

When Destiny players are finished with the campaign, and when they’ve achieved mastery over the standard player-versus-player Crucible modes, they have three options for fresh challenges.

Raids are six-player activities that require precision shooting, puzzle-solving, and acrobatic prowess. Nightfall missions are punishing versions of regular story quests. The Trials of Osiris is a weekly multiplayer tournament that leaves little room for error. Destiny players need skilled, dependable partners for all three, and that’s not always an easy task.

When Destiny players don’t have enough friends online for Raids, or the Nightfall, or Trials, they often turn to websites like DestinyLFG or The100 to find partners. Use of either site is tantamount to rolling the dice and hoping a team doesn’t pull a player that isn’t experienced enough to be of any use, or who doesn’t have the requisite gear to keep up with everyone else.

Or a jerk who makes racist, sexist, or homophobic comments. Or someone that refuses to listen to directions and insists that they know a better way to do things.

To address this issue, Bungie has created a feature for Destiny 2 called Guided Games. Destiny Clans will now be able to advertise themselves in-game, rather than having to post Clan pages to Bungie.net. The Guided Games feature will enable players to look through lists of Clans, find one that looks attractive, and offer to play Destiny with the Clan’s members. Clans, in turn, can advertise an open slot on a Raid or Nightfall or Trials team, and pick up a new player to fill the group. The Guided Games feature could remove a major roadblock to players’ capability to enjoy Destiny’s satisfying endgame activities. 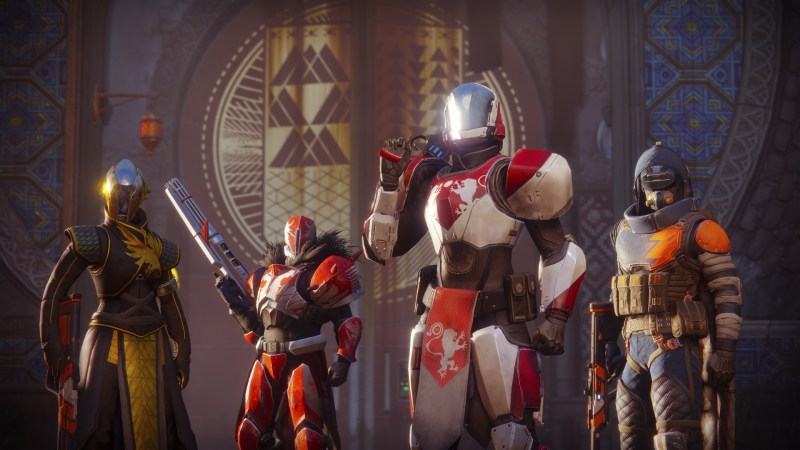 Above: Destiny 2 will feature new matchmaking systems to help players find one another.

Unlike most first person shooters, Destiny features large, open maps as well as more traditional story missions with a beginning and an end. When Destiny players go on Patrol missions, they have the freedom to go where they like, and choose from an array of different activities that usually don’t take very long to complete.

The problem with Patrols in Destiny is that they grew stale. The available missions are repetitive, and players who’ve finished the story and made headway into the endgame may have no reason to bother with Patrols anymore, which removes a large chunk of Destiny’s content from rotation.

Bungie announced even larger maps for Destiny 2 and a collection of new activities for players on Patrol, like “adventures” that sound similar to traditional MMO quests doled out by characters you meet on the open maps. Bungie described “Lost Sectors” as something akin to dungeons in fantasy-type MMOs, discrete areas with a boss character to defeat and loot to earn. It would be nice if Patrol missions remained a fun, viable option for all Destiny players even when they’ve advanced into the challenging endgame activities.

The biggest disappointment with Destiny is the lack of an adequate story. The narrative in Destiny is a throwaway tale that felt divorced from the rest of the game. It was unmemorable, and certainly not up to snuff with the tales told by Bungie in the Halo series.

Destiny 2 focuses its story on three characters that are voiced by Hollywood talent, and who Destiny players have come to love over the past three years. Cayde-6, Ikora Rey, and Commander Zavala, played by Nathan Fillion (Firefly, Castle), Gina Torres (Firefly, Suits), and Lance Reddick (The Wire, Fringe) respectively are the tentpoles on which the campaign in Destiny 2 is hung. When the Last City is destroyed by the evil Cabal, Cayde, Ikora, and Zavala are scattered, and the player’s mission is to find and bring home our three heroes.

Because Cayde, Ikora, and Zavala are characters with whom Destiny players have established relationships, Destiny fans will have more motivation as characters in the narrative themselves, which should provide a forward momentum and sense of direction that Destiny’s campaign lacked. 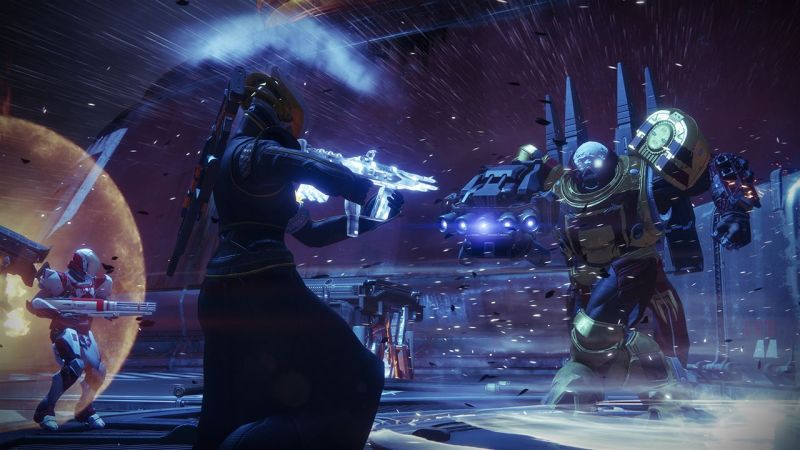 Above: Destiny 2 players will face off against old enemies, on new worlds.

There was a wide disparity between the quality of the Raids in Destiny. The Vault of Glass was an eerie challenge for which players had not been prepared by the campaign. Platforming, puzzle-solving, and extreme team coordination were new aspects of the Destiny experience for players who tackled the Vault, and it was amazing.

Crota’s End, the second raid, was too easy to beat. King’s Fall, the third raid, was akin to the Vault, a foreboding adventure with satisfying puzzles and challenging platforming sections. The fourth and final Raid, Wrath of the Machine, was better than Crota’s End but still not very exciting.

The point is that Raids are difficult to construct, and so it’s understandable that Bungie hasn’t had time to devise more than one Raid for the release of Destiny 2. But the danger here is a repeat of what happened with the Vault in Destiny until Crota’s End was released, running the same Raid over and over again for lack of a second Raid to challenge players.

No details on how Guided Games work

It is entirely possible that rather than solving the problem of lack of access to endgame content, the Guided Games feature could simply drag the same sort of risks involved in using DestinyLFG or The100 and put them into Destiny, rather than keeping them outside the game.

We really need to hear some details as to how Guided Games works, and how it will solve these problems, before believing that Bungie really has a handle on this issue. It’s just as likely that MMOs and FPS games simply do not mix well in some cases, and that problems forming groups for Raids in particular are an inevitable consequence of this unlikely blend of genres. 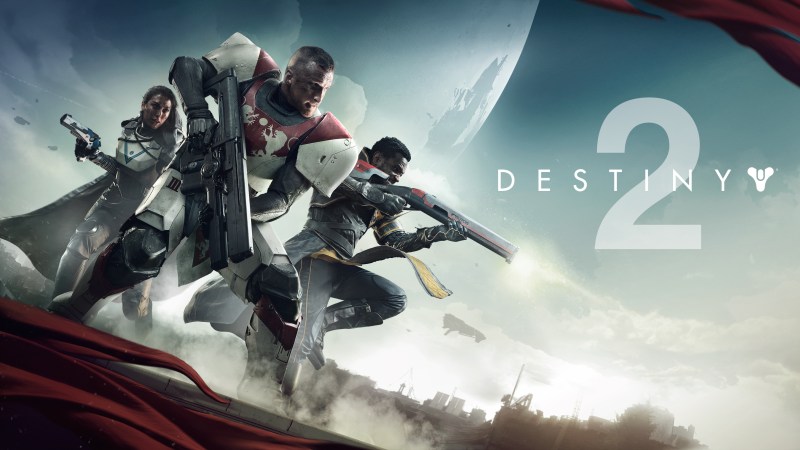 Above: Destiny 2 will be released on PC as well as PlayStation 4 and Xbox One. Who knows where players will go?

A PC release may splinter the audience

I play on both PCs and consoles, and now I’m faced with an uncomfortable choice that Destiny didn’t force me to make: which direction do I go in?

The chief concern here is visual fidelity. PCs can kick the crap out of consoles where visuals are concerned, and the Destiny 2 gameplay footage shown Thursday was beautiful. Bungie has a real gift for creating artistic, vivid visuals, and they’re going to shine on a souped-up gaming rig much brighter than on the PlayStation 4 Pro, or the standard Xbox One.

And then there’s always the mouse-and-keyboard versus control pad debate that PC and console gamers love to indulge in. When highly competitive multiplayer activities like Trials of Osiris demand the pinpoint precision of rapid headshots, the sensitivity of a mouse could be a huge draw for Destiny players that have the option to migrate from the console versions.

Considering that only 50 percent of Destiny players finished a Raid, according to Bungie’s presentation on Thursday, splintering the player base across three platforms instead of two might make it more difficult for players to find groups for Raids, even with the new Guided Games feature.

Bungie’s Destiny 2 reveal showed off improvements that seem to address key complaints players had with the first, but until we have a chance to run through the story, explore the new, open worlds, and try to find Raid partners, they’re all promises that Bungie may or may not be able to deliver on the day Destiny 2 launches.

As a Destiny player with around 2,200 hours sunk into the game, I’m willing to be patient with any early missteps with the sequel. My concern is the friends who tried Destiny, bailed out early, and never came back. I had to use DestinyLFG and The100 for months before I finally found an endgame Clan, after which Destiny became an entirely different experience.

I’d like to be confident that Destiny 2 will have a much smoother launch, and that Bungie will have solved the first game’s looming issues. So far I’m optimistic, because Thursday’s presentation showed that Bungie really does understand what it did wrong with Destiny.