Destiny’s newest expansion, The Taken King, is getting strong reviews. But we should remember how much of a disappointment the shooter was to some when it first came out last year.

It had plenty of problems. One of the most common criticisms was its lackluster story. Bungie is the same studio that made the Halo series, so many expected that it’d deliver another cool sci-fi tale with Destiny. But that’s not what debuted. Instead, Destiny’s story was a series of random missions loosely strung together by a robot who wouldn’t explain anything.

But a lot can change in a year.

With The Taken King expansion, Bungie said that it would actually have a proper story to tell. And it backed up its claims by introducing sweeping changes that’d essentially rewrite Destiny’s history. So I decided to jump back into the game after a seven-month absence to see if the storytelling improved.

As I played through Destiny and its expansions, I went through old interviews and videos about the story and compared the studio’s comments to what we got in the final products from publisher Activision. The best way to track these changes is to start at the beginning.

It’s hard not to laugh when you revisit what Bungie was saying about Destiny in the years leading up to its release. In the reveal trailer from 2013 (above), it gave an overview of Destiny’s solar system, saying that if you could save the city from destruction, you’d become “legend.” That tagline stuck around, but some of the areas and planets seen in the video weren’t included in Destiny’s original release (only a few of them showed up later in the expansions).

During a press event at Bungie’s Seattle headquarters in February 2013, the studio referred to the plot as a series of stories “that unfold like chapters” in a book. It was up to players to find out “the mysteries of the world and the looming aliens” within it. GamesBeat lead writer Dean Takahashi heard something similar: Destiny’s campaign would eventually look like a “series of interconnected novels with self-contained stories.”

And in an interview with GameSpot during the 2013 Electronic Entertainment Expo tradeshow, Destiny writer and design director Joseph Stanten (who has since left the company) said it would use different storytelling methods. He ended the interview by saying, “But if you love a great cinematic story, Destiny has that for you, absolutely.” 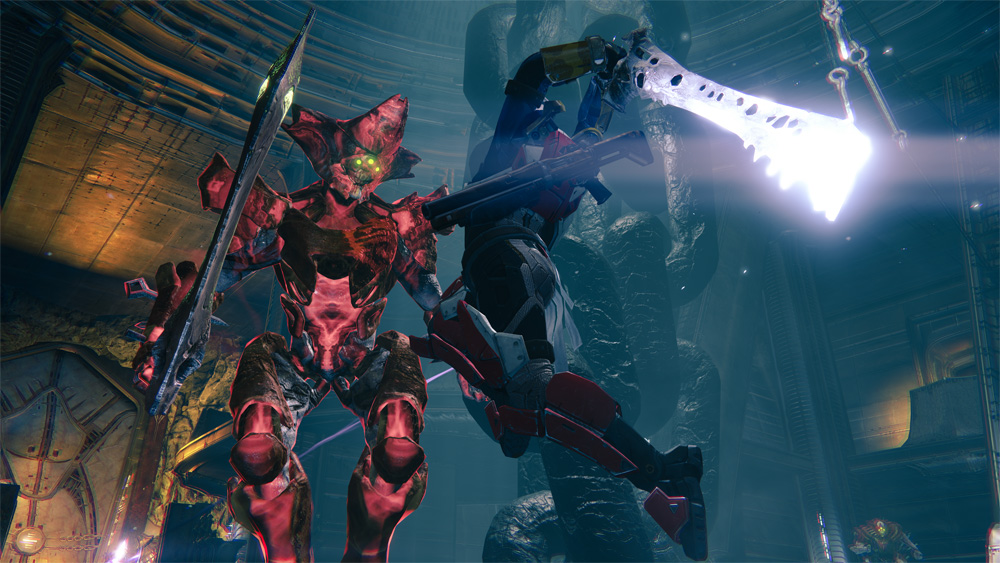 Above: One of the main-story missions requires you to wield an evil sword.

The version of Destiny that Bungie released is nothing like the vision it was pitching. You play as a Guardian, a space-faring supersoldier who’s brought back to life by a floating little robot called Ghost. Together, you go on a series of missions around the universe to eradicate various alien threats. But it never amounts to anything. It doesn’t have any stakes. I killed the Fallen on Earth and the Hive on the Moon because a character said it was the right thing to do. I fought the Cabal on Mars because they were evil, too.

And then I went to the ominous-sounding Black Garden on Venus to destroy a giant piece of goo because the Vex were suddenly the most important villains in the game. The ending, if you can call it that, is a brief cutscene that is more or less a pat on the back, as if Bungie is saying “Nice job!”

I didn’t give a damn about any of Destiny’s characters. Their only purpose is to guide you from point A to point B. The few people who look or sound interesting — like the queen of the Awoken people and her brother — only have a few minutes of screen time before Bungie inexplicably drops them from the storyline.

It’s mind-boggling. How could Bungie and Activision spend so much time and money — $500 million over the next 10 years — and not come up with a good story? Without a strong narrative, the game feels hollow and aimless.

If you want more details about the lore, you have to go outside the game to Bungie’s website or the Destiny mobile app to read short descriptions on Grimoire Cards. I couldn’t believe that this was the best the Halo creators could come up with.

The Dark Below (first expansion) 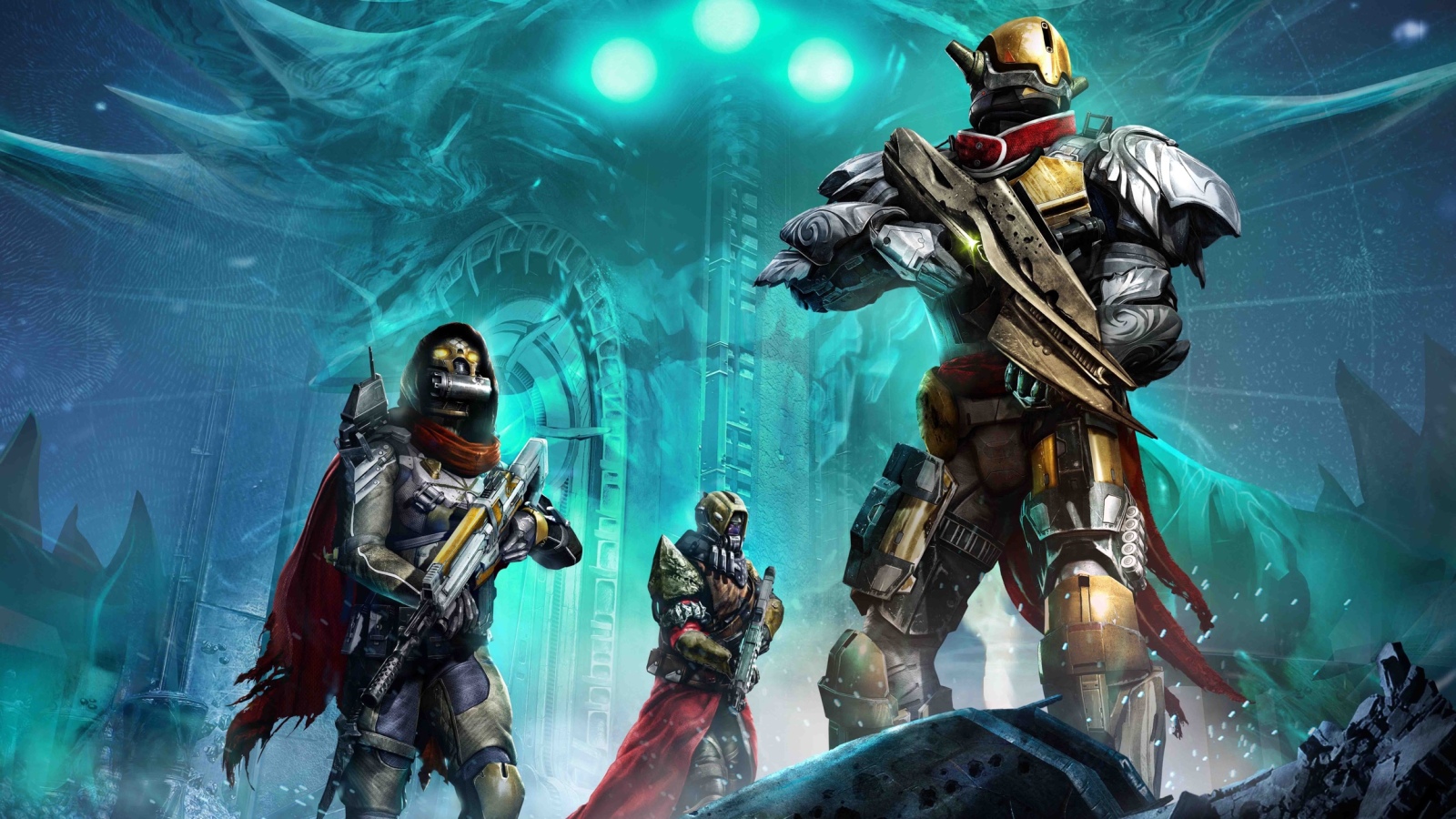 Above: The Dark Below takes place on the moon.

In a December 2014 interview with Eurogamer, Bungie president Harold Ryan said that the new missions in The Dark Below were partly influenced by the intense criticism the story received from fans and reviewers. Bungie would try a new storytelling approach. Ryan said it would “feel much more emergent and interactive in the world” and that it’d be “faster-paced with more action” and exposition.

The Dark Below adds the dreadfully serious Eris Morn to the growing roster of people who tell you what to do. Some time ago, she and other Guardians ventured to the moon to kill a powerful alien god named Crota. They failed, and Eris was the only survivor. Now she’s out for revenge, and it’s your job to help her finish what her team started.

As Ryan said, The Dark Below did try a different approach, but it isn’t that much of a departure from the original game. With Ghost’s dialogue relegated to just text entries, Eris becomes the most talkative character. She spills plot details into your ear before, during, and after each mission. The Dark Below doesn’t have any new cutscenes, so you only see Eris in person when you turn in your completed quests.

Without much face-to-face interaction, I felt like I was listening to an audiobook rather than experiencing a real story. All the good stuff happened in the past, like when Eris was with her squad of Guardians attacking the Hive, or when she was hiding in the moon by herself for months trying to survive. I’d much rather play those events from her point of view. Instead, I was her one-man cleanup crew, mindlessly checking the boxes on her little hit list.