Deus Ex: Mankind Divided is a sci-fi video game with a story that is disturbing because it reminds me so much of our own times while living under the threats of terrorism, cultural and racial segregation, corruption, and Machiavellian politics. It is a serious examination of the consequences of cynically pitting one group of humans against another, and it’s a lesson for us all on how to avoid a future of oppression and shadow.

Mankind Divided combines this serious theme with a cast of memorable characters, including the frustrated augmented hero, Adam Jensen. It mixes that with a bleak cyberpunk vision of the future, an oppressive totalitarian landscape, and gameplay that combines the genres of action, stealth, and role-playing games.

The game from Square Enix and Eidos Montreal is one of the biggest releases of the year, and its ambitions are huge. It has flaws, and it isn’t easy to play it in a way that keeps you immersed in a seamless world. But it is well-executed enough to draw more fans to a franchise that has had a growing cult base with each major release. Diehard fans have waited five years for this, and they’ll enjoy the experience.

It’s easy to spend 25 hours or more playing Mankind Divided, which comes out today. I played it on the Xbox One and the Windows PC. It’s also available on the PlayStation 4. I recommend you play it through a couple of times to master the gameplay. Here’s a link to our tips and tricks for playing Deus Ex: Mankind Divided.

The Deus Ex story is very compelling. Deus Ex: Mankind Divided is set in 2029, two years after the events of 2011’s Deus Ex: Human Revolution. With Mankind Divided, developer Eidos Montreal has created a near-open world where you can explore side quests, alternate paths, and craft solutions on the fly to overcome obstacles.

You play Adam Jensen, a mechanically enhanced ex-cop and former corporate security specialist who is now working for a newly formed counterterrorism division of Interpol. He can tap his “augs,” or augmentations, to accomplish superhuman feats, such as sneaking invisibly past guards or taking out a room full of enemies with an explosive blast.

In Human Revolution, Jensen’s job was to safeguard company researchers, but that changed when a black ops team killed the people he was hired to protect. He adapted augments to save his own life, and he started using his augmentations to hunt for answers. His investigation eventually revealed that a powerful shadow group, called The Illuminati, who controlled the world with their money and influence.

One of the Illuminati, Hugh Darrow, set off a signal that went to the chips installed in all of the mechanically augmented people worldwide (except Jensen), forcing them to murder millions of “natural” humans. He did so because he wanted to end all human enhancement forever. Mankind Divided takes place in 2027, two years after the “Aug Incident,” and the animosity between “augs” and “naturals” is at the breaking point. The augs have been put into ghettos, and the oppressive atmosphere feels totalitarian.

Jensen is working for Task Force 29, the part of Interpol that tracks down terrorists in an attempt to keep the peace. But the world is spinning out of control, with natural extremists advocating full segregation via the Human Restoration Act, a United Nations resolution that’s facing a vote. The aug revolutionaries have their own splinter group, the Augmented Rights Coalition, to take their defense into their own hands. Their group’s base is in Utulek, also known as Golem City, a ghetto on the outskirts of Prague in The Czech Republic.

Jensen wants to bring the people pulling the strings into the light. But he feels powerless to stop the cynical Machiavellian scheme of blaming the augs for the terrorist incidents. And his path forward is clouded by the presence of spies and double agents. Among the mysterious counter-forces is the Juggernaut Collective, an Anonymous-like hacking group with a leader who calls himself Janus.

This theme, where a lone hero stands up against powerful people who try to scapegoat the defenseless, is a mirror for our own society.

“We didn’t try to change the story to fit real-world events,” said Eidos Montreal producer Oliver Proulx in an interview with GamesBeat. “The themes we chose just resonate. Cyberpunk helps with that kind of interpretation. Unfortunately, some themes are a bit more prominent today than when we started designing the game.”

The beginning missions in Dubai and Prague 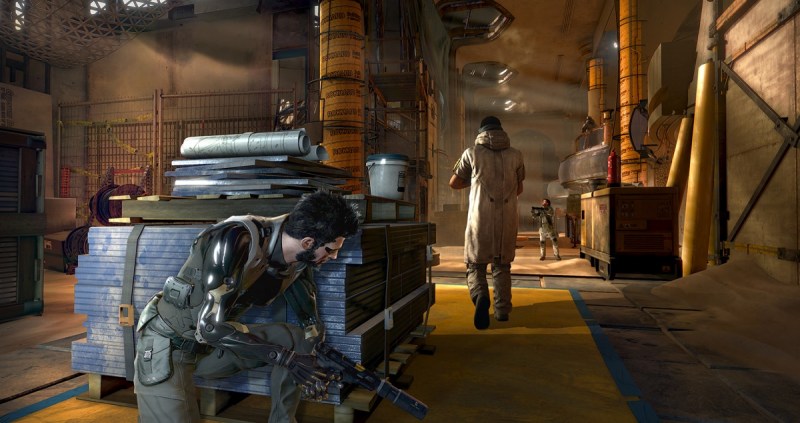 Above: Will you use action or stealth in Deus Ex: Mankind Divided?

Mankind Divided starts with Jensen on a mission in Dubai. Prior to 2027, Dubai was one of a number of cities in the Middle East that embraced the lucrative benefits of mechanical augmentation. Construction and technology boomed there, with thousands of augmented works migrating in. But the Aug Incident devastated Dubai’s population, and two years later, it’s a ghost down of skyscrapers full of the dead.

Jensen and other Task Force 29 operatives are closing in on an arms deal. He has to move through an abandoned skyscraper in stealth, taking out members of the Jinn criminal group, on his way to the deal location. You can choose to take out enemies 1-by-1, skirt them entirely, or engage in open combat using augs such as your “Typhoon” capability, which causes an explosion that takes out anyone within range of Jensen. Just as Jensen and his team are about to pull their sting on the Jinn, a mysterious new armed force shows up to steal the weapons. Jensen has to act fast to stop the attack. The result is a huge firefight. The first time I did this mission, I accidentally stumbled on a quick resolution.

In the next scene, Jensen arrives in Prague to go to the Task Force 29 headquarters. The city is also trying to recover from the Aug Incident, and its solution is to curb the civil liberties of augmented humans. But as Jensen arrives at the train station, a terrorist bomb goes off, killing innocent people and disabling Jensen’s augmentations for a time. The bombing brings home the horror of a world living in constant fear, and it inspires an even tougher crackdown on civil liberties, where the authorities pull off augs on the streets and question them at gunpoint.

In contrast to Dubai, which is a fine tutorial mission, the pace slows down in Prague. You can explore the Czech Republic’s capital and its various districts. Both missions show the contrast between a tightly controlled experience and a more free-roaming open world experience, and that shows the tension between guiding the gamer and allowing the gamer to follow his or her own story. 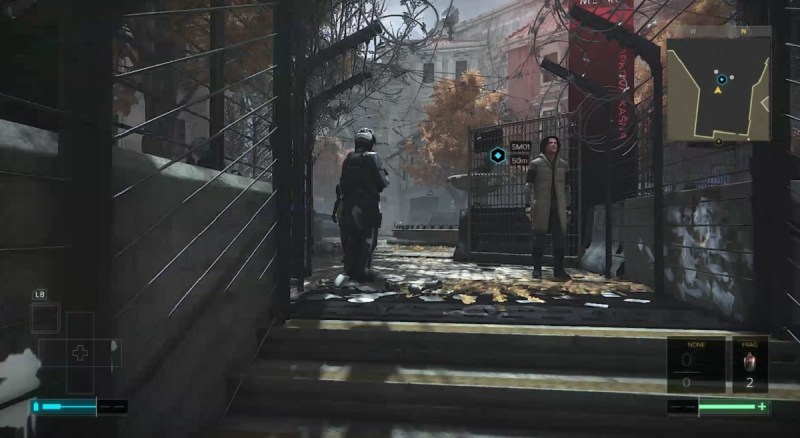 Above: The police are everywhere in Deus Ex: Mankind Divided.

Prague is full of garbage, graffiti, homeless people, and deteriorating buildings — this all contributes to the oppressiveness I felt the moment I hit its streets. The police wear heavy armor and carry combat rifles. They stop and question augs as drones fly overhead.

The “races” are segregated. The subway has a line for “naturals” and a line for “augs.” The hatred is clear in the way the police interrogate each aug. Fear rules the streets. It’s not easy for Jensen to get around here, particularly in secret. The world of Prague is full of totalitarianism, corruption, and fear.

Likewise, the segregation camp on the outskirts of Prague is just as oppressive. The Utulek Complex, also known as Golem City, is the home of rebellious augs known as the Augmented Rights Coalition, and it’s ruled by an elusive leader named Talos Rucker. He is one of many interesting characters in Mankind Divided.

The story and the characters The story of Deus Ex spans a lot of hours, with some well-done cinematic scenes following each major section of gameplay. The conspiracy gets darker and thicker, with spies and double agents complicating the web of competing interests — which include Interpol and its internal politics, competing multinational corporations, factions among the naturals and the augs, corrupt law enforcement, and criminal enterprises.

The cast of characters is big. Besides Jensen, there are some intriguing personalities that you come across, from billionaires like Nathaniel Brown to the mysterious Alejandra “Alex” Vega, a hacker employed by Janus, the leader of the equally mysterious Juggernaut Collective. You have to converse with these characters and make decisions based on whether you trust them or not. You’ll find that the lies run deep in Deus Ex.

Jensen often has to make judgment calls on the fly. Who should he save? Which mission should he pursue first? Even the side missions are fully fleshed out with characters and stories, and that adds to the immersion of the world. The hard choices are consistent throughout the game, and the consequences tumble down in the most painful way most of the time.