More than 70 percent of developers are dissatisfied with their current options for app marketing and advertising.

That’s the results of a survey by Papaya Mobile, which offers the AppFlood service for promoting mobile games and apps. The survey shows that the majority of developers don’t have a clear idea of the benefits of mobile marketing channels. In particular, they don’t trust ad network providers.

Papaya Mobile, based in Beijing, surveyed more than 1,000 developers of all sizes to get perspective on the state of mobile app promotion and monetization. The company found that this kind of issue is one place where the mobile experience, which is the theme for our upcoming MobileBeat 2013 conference, could definitely improve.

The survey found that cost wasn’t the most important factor in choosing a mobile ad partner. Cost ranked third, chosen by 37 percent of the respondents. The most important factor for half the developers was whether they could trust the ad partner to deliver effective results at a reasonable price. They have so many options that they’re confused about which approach is the best.

About 71 percent of all respondents said that ad networks exaggerated their eCPM (effective Cost Per Thousand impressions) claims. Overall, medium-sized developers were the most dissatisfied with the eCPM claims of ad networks, with 80 percent or more citing they felt that eCPM figures were exaggerated. About 70 percent of small developers and 60 percent of large developers shared that view.

Most developers said they are happier with a “do it yourself” approach to their app marketing, with 73 percent preferring to purchase and book their own media for campaigns rather than hand it over to a specialist media planning agency.

When asked how they decided which ad network or marketing service to use, 26 percent of smaller developers, 19 percent of medium developers, and 12 percent of large developers all responded that “they took a chance” when making their decision.

Si Shen, the chief executive of Papaya Mobile, said, “Developers instinctively gravitate towards big name ad networks and service providers in the belief that they can ‘trust’ these brands to offer an effective app marketing service. However, the fact that the vast majority of developers – especially smaller ones – are also unhappy with the results achieved relative to the cost suggests a gulf in expectations between themselves and the ad network providers.”

“To properly earn the trust of today’s cost-conscious developers, for whom meaningful results and a positive return on investment on their marketing investment are a priority, ad providers must be prepared to be more transparent with their app marketing offerings – especially around campaign planning, reporting, and measurement,” Shen added.

Papaya Mobile was founded in 2008. 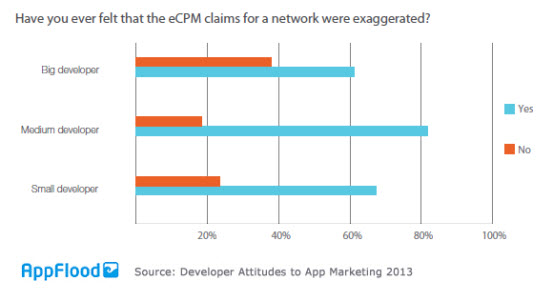