If you ever wanted to know just how hard it is to make great-looking hair in video games, Siggraph is the place to be.

Game developers, along with thousands of other professionals, flocked to the Los Angeles Convention Center for the annual Siggraph computer graphics conference. But unlike the Electronic Entertainment Expo tradeshow in June (which takes place in the same venue), Siggraph 2015 felt like a low-key affair. It was much quieter and less crowded than E3. And games were just one part of a five-day agenda that also included hands-on training courses, the latest motion-capturing technologies, the newest products from graphics software makers, and more.

“One of the reasons why you come here is to be exposed to not only the game industry but also to the computer graphics innovations that are happening in film and television, that are happening in manufacturing, that are happening in education and academia,” Siggraph games chair Mike Hardison told GamesBeat. “It’s this [gathering] that actually creates the spark of innovation. You’re able to borrow the ideas from all these different industries and vice versa, and it creates some really neat results because of that.”

Hardison, who’s also a senior lighting artist at Blizzard Entertainment, spent the last year and a half helping to build Siggraph 2015’s slate of game-related presentations. The schedule covered a diverse range of topics, including the challenges of making virtual reality content and a look at the production process for upcoming titles like Mirror’s Edge Catalyst and Deus Ex: Mankind Divided.

It’s difficult to fully appreciate Siggraph if you’re not a developer, but I was still able to find a few cool things to see during my two-day stay. Here are a few highlights from the show. 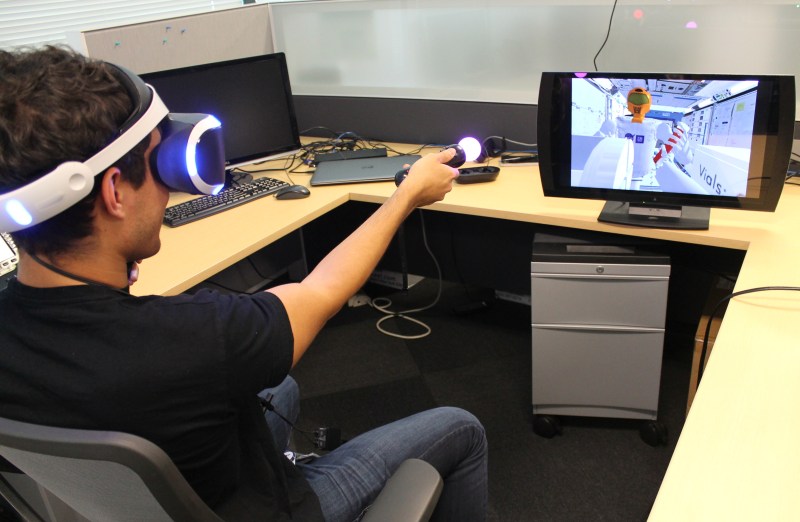 Above: An intern playing with Mighty Morphenaut.

During a series of presentations about VR development in games and other forms of media, Richard Marks spoke about the lessons his team learned from demoing Mighty Morphenaut, a multiplayer VR experiment. Marks is the director of PlayStation Magic Lab, a research and development branch within Sony Computer Entertainment that tries to create entertaining experiences out of the latest pieces of technology. Among other things, Marks is known for creating the PlayStation EyeToy motion-tracking camera and the Morpheus VR headset for PlayStation 4 consoles.

Mighty Morphenaut is the latest collaboration between Magic Lab and the NASA Jet Propulsion Lab. The demo takes place on the International Space Station, with two players controlling the upper torso of humanoid robots (NASA’s Robonaut 2). They must work together to solve various tasks. Players use PlayStation Move controllers to operate the robots’ arms and hand objects to each other. Mighty Morphenaut also has a voice chat feature (something Magic Labs hadn’t tested in its VR projects before) where it sounds like the other person’s voice is coming from the robot’s head.

Between their own internal testing and the demonstration at Siggraph, Magic Lab and NASA learned that collaborating in VR is very satisfying, especially if you can hear each other’s voices. They realized they made some mistakes as well, like not making the robots’ heads move with the players’ eyesight, which made it hard to tell what the other person was looking at. Marks mentioned another important lesson: Magic Lab interns were having way too much fun with it (which might explain the Power Rangers reference in the name).

In the past, the Magic Lab and NASA built a 3D recreation of Mars using data from the Mars Curiosity Rover. The researchers could look around with Morpheus, but it didn’t use any controllers. The next project focused on spatial manipulation in VR: They used PlayStation Move to control the legs of robots to make them walk. That’s when they found out that working together with another person in VR is a fun experience. 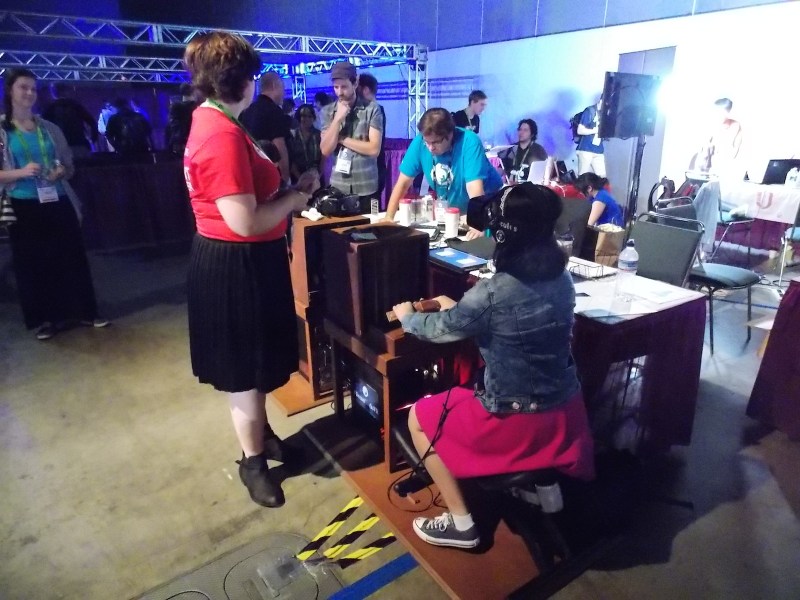 Above: The DragonFlight VR stations.

Flying on the back of a virtual dragon

For just one day, DreamWorks Animation demoed DragonFlight VR on the show floor. It was a surprisingly thrilling experience based on the studio’s popular How to Train Your Dragon film franchise. DreamWorks had two stations with cushioned seats and kneepads that you could lean against. Above the PC was a T-shaped controller that’s actually a flight stick covered with a leather-like material. Behind that was a box with a portable fan inside of it. While the setup looks laughably impractical when you see it in person, it makes sense when you play the game.

After I put on the Oculus Rift headset, a DreamWorks employee asked me to be gentle with the controller. I soon found out why. In the demo, I was sitting on the back of Toothless, one of the beloved dragons from the films. Seconds later, we were soaring through the air trying to keep up with the other dragons. Thanks to the fan, it felt like the wind was actually blowing through my hair as I dove closer to the water by pushing down on the stick and pulling it up to fly through the clouds. I gripped the controller tighter and tighter as I bought into the illusion.

The three-minute demo was over just as I was getting into it. Is it ridiculous? Yes. But I wouldn’t mind having my own custom dragon seat at home. 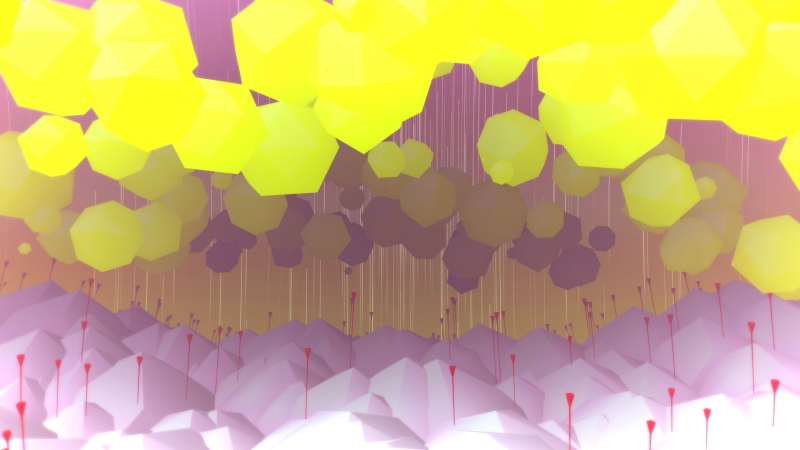 Above: This gives you a sense of how abstract the images can be in Panoramical.

Most of the talks I went to dived into the technical details of making games. Developer Fernando Ramallo did something quite different with his presentation on Panoramical, which he described as a “collection of musical landscapes.” After selecting one of the abstract environments from a textless main menu, you can alter the music and the landscape with a keyboard and mouse (for Siggraph, Ramallo used a custom controller that had a bunch of knobs). After a brief preamble of who he was and what kind of game he was working on, Ramallo played a slowed-down version of Panoramical’s intro. It lasted for 15 minutes.

It was an unusual but soothing break from the talks I previously sat through. At times, Panoramical looked like it was taking us on a fantastical voyage through space as white lines stretched away from the horizon.

“The game is about exploring all those [different] combinations and finding beautiful moments that resonate with you while also being immersed in soundscapes,” said Ramallo.

Panoramical is coming to PC and Mac later this year.