Like my colleagues at GamesBeat, I spent every hour of this year’s Game Developers Conference frantically running from one meeting to another. Unlike them, I didn’t focus on the talks and personalities of the industry but on the games themselves.

The good part about this is that I got to see a lot of cool stuff. The bad part is that I am only one man and there are hundreds of games out there. I can only write so many full blown articles before my fingers fall off and my brain stops finding witty ways of saying word stuff.

So to preserve what’s left of my hands and save you a couple hundred thousand words of text to read through, I’ve broken down a good chunk of the games I saw at this year’s Game Developers Conference into this convenient, albeit late, list. 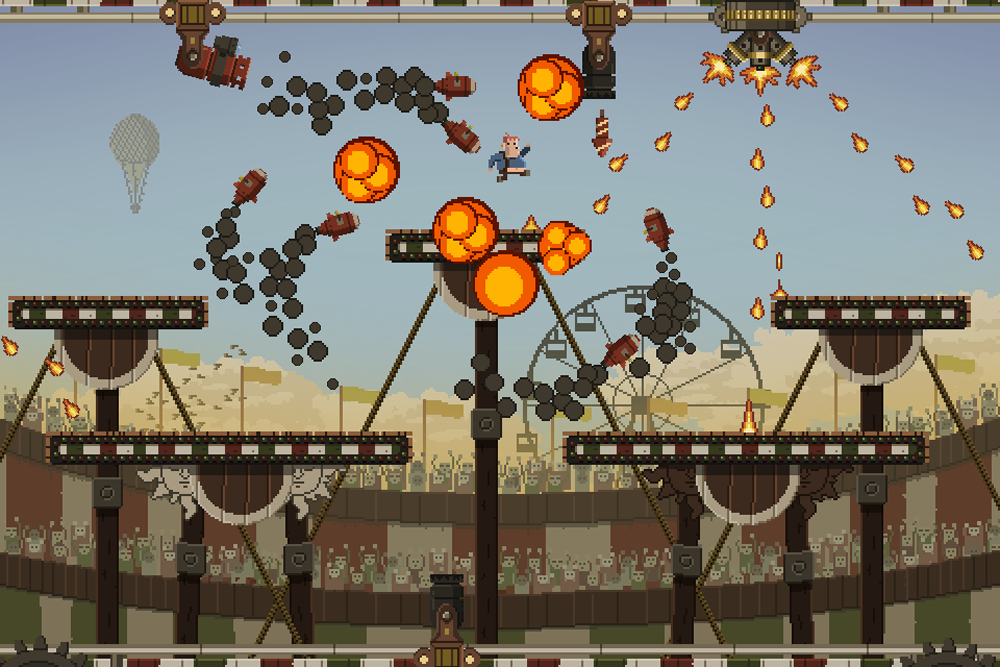 Above: Well, that’s one way of getting in cardio…

Developer: Self Made Miracle Publisher: Team 17
Platforms: PC/Mac Steam — May 2015

A young, plump, farm boy who is infatuated with the circus finds himself kidnapped by a sinister ringmaster. Our unfortunate hero finds that his curiosity could wind up killing him when he is thrust into the center stage of a death defying main attraction. Night after night, he must survive the circus’ many inventive killing machines in front of a growing crowd of snuff thrill seekers.

Think of Penarium’s gameplay as a deadly version of the original Mario Bros. Instead of knocking turtles onto their backs by head butting a ceiling, you’re dodging saw blades and ducking bullets in order to collect precious barrels.

The designer, Teun Westenenk, has a solid grasp on what makes for a great 2D action game: keep the controls simple and understandable, then design complexity around the levels. Like Fenix Rage, this philosophy keeps the difficulty hard, but never unfair. Expect more from me on this title in the coming weeks. 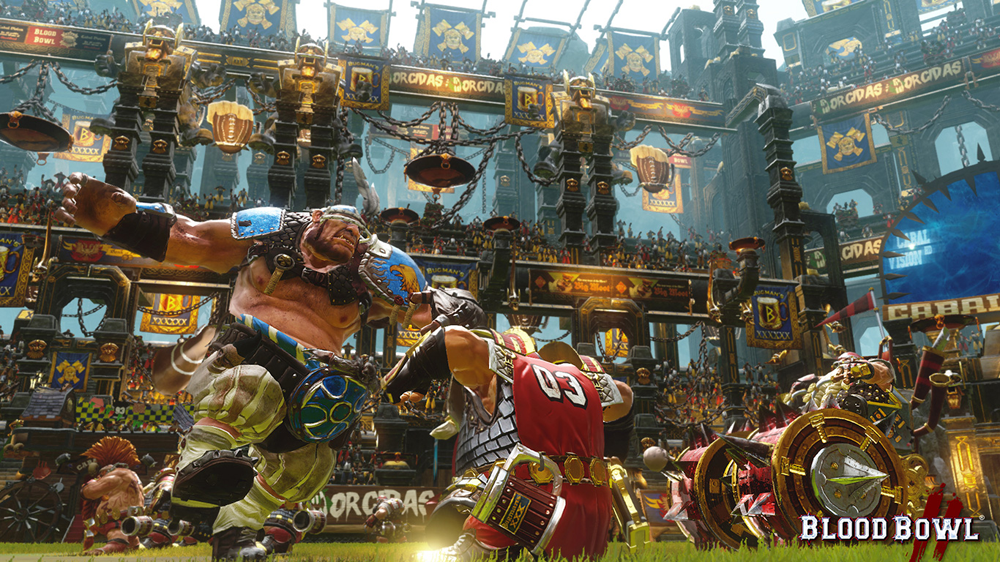 Above: For crying out loud, fine! Take the ball. I’m going home.

Blood Bowl II is based off of Games Workshop’s (WarHammer) brutal fantasy football pen and paper game of the same name. Teams consisting of Orcs, Dwarves, Humans, Elves, and the Undead — battle each other, literally, on the grid iron using modified versions of American football rules.

The interesting part is that Blood Bowl II doesn’t play in real-time like, say, Mutant League Football (speaking of missing games) but instead sticks to its board-game roots. Every play is handled through several strategy game style turns, where dice rolls determine the outcome of an action, and every detail of every player’s movement on the field is scrutinized.

To Madden players, this gameplay may sound incredibly boring, but the violent cartoony theme coupled with a different approach to the sport placed this one on my radar. Above: Goo on goo violence

Three Flip Studios’ passion for the couch multiplayer experience resonates in this quick and fun competitive shoot-em up. Up to four players take control of a small glob of goo roaming a 2D open arena. The gelatinous creatures start off unarmed and completely harmless. Weapon upgrades, however, eventually spawn onto the screen, creating a mad race amongst players to get to the upgrades first in order to arm up.

Depending on which direction the creature makes contact with the upgrade will determine what angle a gun will stick to their body. So if a blob collects a shotgun by running over it with the left side of its body, the fire arm will aim to the left.

Every weapon a creature collects also expands their body. Collect enough weapons and the slime will become a giant wad of death, firing projectiles in multiple directions. The good thing about this situation is that you have a ton of firepower to attack the other players with and your size can be used to physically bully other players away from upgrades. The con is that you’re a gigantic target that is easy to shoot down. Once someone kills a creature, all those guns that were attached wind up flying into the arena for everyone else to pick up, while the dead creature respawns as the default little puddle.

Armed and Gelatinous is a small, simple, and quick game where the balance of power is in constant swing. It begs to be played during one of those nights where a bunch of intoxicated friends are looking for something fun to do without having to remove their asses from your couch.

Above: After this, I’m going to tweet how ‘over sports’ I am…

You know that person in your social media sphere that constantly reminds everyone that they don’t understand the appeal of the Super Bowl or World Cup? Or the friend that claims to like games, but won’t touch a sports video game? Super Slamdunk Touchdown is the 8-bit embodiment of what I suspect is going on in the minds of athletiphobes when they are forced to watch football (both kinds…yes, there are two types).

The build at GDC was a two vs. two game, where each player chooses a sport character class to play as. So a football player is big and tough, a basketball player has more shot accuracy, a soccer player is quicker, etc.

A random sports ball is put onto the court and players must score a point by putting the ball into one of three goals: a basketball hoop, a field goal, or a hockey/soccer net (which is protected by a computer goalie). The type of ball doesn’t regulate which goal you’re trying to score. Just shoot for any of them.

Super Slamdunk Touchdown is both a throwback to the NES sports games of my youth and a self aware comedy about the disdain of athletics amongst our peers. Nothing symbolizes that idea more than seeing a football player take a soccer ball to the hoop in a Double Dribble inspired slamdunk cutscene. 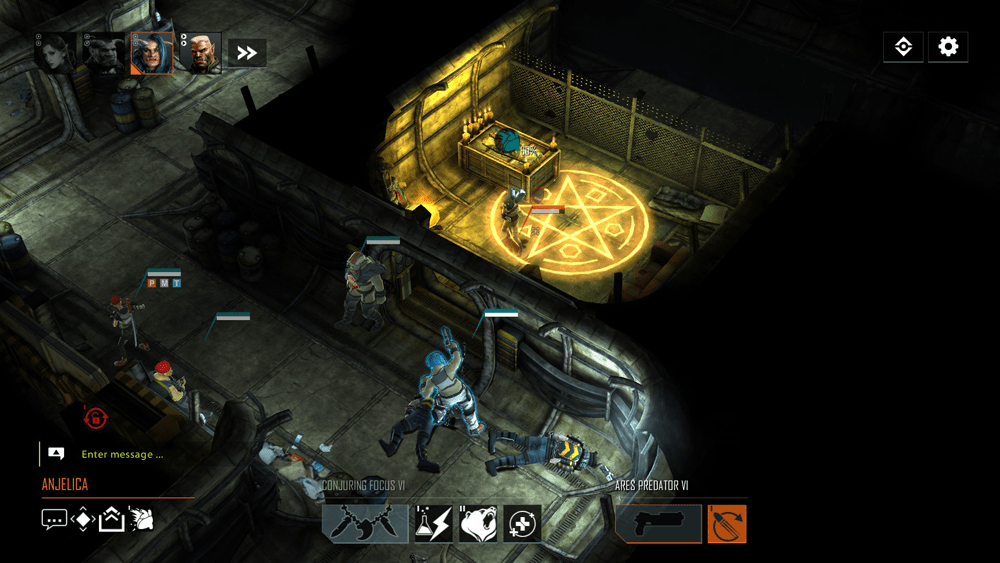 Above: So, bathroom is down the hall. We all share it. Kitchen is just off the common area. This is your room with the giant pentagram. Sleep well!

There are a couple of confusing tidbits about this project that were clarified for me during GDC. For one, Shadowrun Chronicles: Boston Lockdown is the new name of the early access game Shadowrun Online. Another thing to note, because everyone seems to make this mistake, this is not the online version of the Shadowrun Returns games, despite the fact that they share a website, a similar art style, and perspective (although I am told both developers are on friendly terms).

The gameplay has several similarities as well. You have to build a team of runners who need to take on a hacking mission of some kind. Everything is set to a psuedo-isometric grid, where all actions are turn based.

What’s different is that the experience revolves heavily around cooperative play. You create your own mercenary-for-hire and partner up with friends to go on various raids. The part that has me intrigued, however, is that you can create your own set of characters to go on missions when you’re playing solo. This will allow the experience to become much more personal than, say, forming the most optimal team everyone else is using from the same catalog of pre-made characters.

What’s even cooler is that you can share these personalized characters with your friends. So if you want to play by yourself, but could reall use some bad ass hacker that a friend created, you can hire that character and bring them along. Anything that happens to that character during a mission isn’t permanent. Characters won’t be permanently killed off, while at the same time they won’t earn bonuses or experience points just because they get used a lot.

Although I enjoyed Shadowrun Returns, there were times where the experience felt restricted by a tight narrative structure. Like it didn’t matter what character I created or what decisions I made, I was always going to wind up going from point A to point B in the same way thousands of other people have done so. Shadowrun On…I mean, Shadowrun Chronicles, may provide me with something a bit more open.