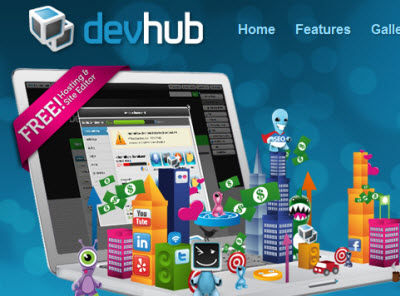 Gamification is a hot buzz word these days. It means taking the mechanics of games and what makes them fun and then applying them to non-game applications. Evo Media Group, which runs the DevHub site that lets users create their own blogs and web sites, is the latest to do it with powerful results.

Before gamification, about 10 percent of users finished building their sites. Now, almost 80 percent of them do.

DevHub originally launched in February, 2009. Its site-building tools did OK, but there was lots of competition. And a lot of users were “lookyloos,” who built partial web sites but never stayed around long enough to spend any money on special features.

Geoff Nuval, chief executive of the Seattle-based Evo Media, started looking to games for answers. He read about gamification and played a treasure-hunting game for 40 hours during a weekend gaming binge. He viewed a popular talk about gamification by Jesse Schell of Carnegie Mellon University and then took the plunge with his team. For three months, they revamped the site, figuring out ways to give users points, coins and badges. 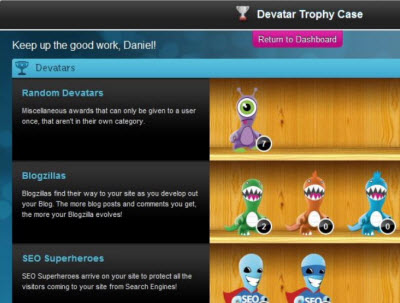 On July 9, the company relaunched its gamified version where you can build your own “online empire.” The site has a meta game built into it, giving users rewards for completing tasks and allowing them to compete for prizes. The users get rewards for adding more features to their bare-bones web sites. Too often, early users created only basic, skeletal sites. DevHub fixed that by creating a step-by-step process where you can level up with each new addition that you complete. Each step is like completing a mission in a game. One recent new feature is “build a site with a friend,” which makes the process more social.

“The question was how do we get to upsell users on premium goods and upgrades,” said Nuval.

During the process, you can accrue virtual points, which you can then use to make the site better. You get points for adding text or photos. You can browse through the DevHub market and find stuff to add, such as widgets and links to other sites. DevHub improved its back-end tools so users could pull into their site the things they had already created or uploaded to other sites. DevHub also created a “drag and drop” process for adding new content. That made it much easier for users to proceed with the DevHub site-building process. Finally, the sites were dynamically updated so that changes users made could be reflected immediately.

DevHub has around 40,000 users, and about 4,800 new sites are being added each week. Before the site was “gamified,” users would sign up and then perform one or two actions per session. Now that has increased nine-fold. Average revenue per user also increased four-fold as they signed up for various DevHub offers. The users can make money through DevHub by setting up their own e-commerce options.

Roughy 1 to 2 percent of users are spending money. DevHub’s goal is to hit $2 per user per month, up from about 40 cents per user now.  About a quarter of registered users are active now, but the goal is to improve that percentage as well. The numbers are all small and not particularly worth bragging about. But the evidence of how gamification can improve the popularity of a non-game application is clear.

Lots of users are going about collecting rewards, which include simple avatars that are littered throughout the building process. They pop up and give the user a moment of surprise, sort of like getting a prize in FarmVille on Facebook. DevHub picked up its expertise on gamification through tips from experts such as game designer Amy Jo Kim.

The company, founded in 2007 by Nuval and partners Mark Michael and Daniel Rust, has 15 employees and raised about $2 million in angel money from Voyager Capital’s Geoff Entress, WhitePages chief executive Alex Algard, Intel Capital’s Jeff Schrock and former Disney Online president Richard Wolpert. The company is seeking another round now.

Over time, the company will offer more gamification features. It has launched an online video show about gamification called Gamify.tv. And the company is seeking a new round of funding. Now that it has growing traction, DevHub can get on with its goal of democratizing the publication of content and earning rewards for those who create it.

“It’s really early days for gamification now,” Nuval said. “But we’ve shown it works. Our engagement is much better.”