I would have thought that I’d love any game that has me fighting demons with a motorcycle. I enjoyed Devil May Cry 5, which comes out for PlayStation 4, Xbox One, and PC on March 8 (I played on an Xbox One X). But I didn’t love it.

Devil May Cry 5 is an action game featuring over-the-top combat. Well, a lot about the game is over-the-top. Most aspects of Devil May Cry 5 — including humor and music — come at you with the force of a battleship broadside. It will bombard you.

I think you’ll like it … or at least some of it. Devil May Cry 5 has some weird pacing problems thanks to the way its switches perspectives between three different characters, each with separate abilities and power levels. It’s a fun ride, but it can be jerky and uneven one.

Most combat involves using guns and swords to take down demons. Fighting has a great flow to it, with impressive character animations blending the transitions between different attacks.

You play as three different characters. Nero uses a sword and a revolver, and he also has a robotic arm that can pull him closer to enemies (or pull them closer to him). Dante has a sword and dual pistols, but he expands his arsenal throughout game, which includes fun and flashy weapons like two motorcycle wheels. These big weapons feel great and heavy when you use them, and you can even combine them together to ride a full motorcycle into enemies.

V is the most creative character. He uses demons to fight for him. On the Xbox One, the X button is a ranged raven attack, while the Y button sics a demonic panther on enemies. He can also summon a giant golem as a special move, and this massive creature makes some big entrances. 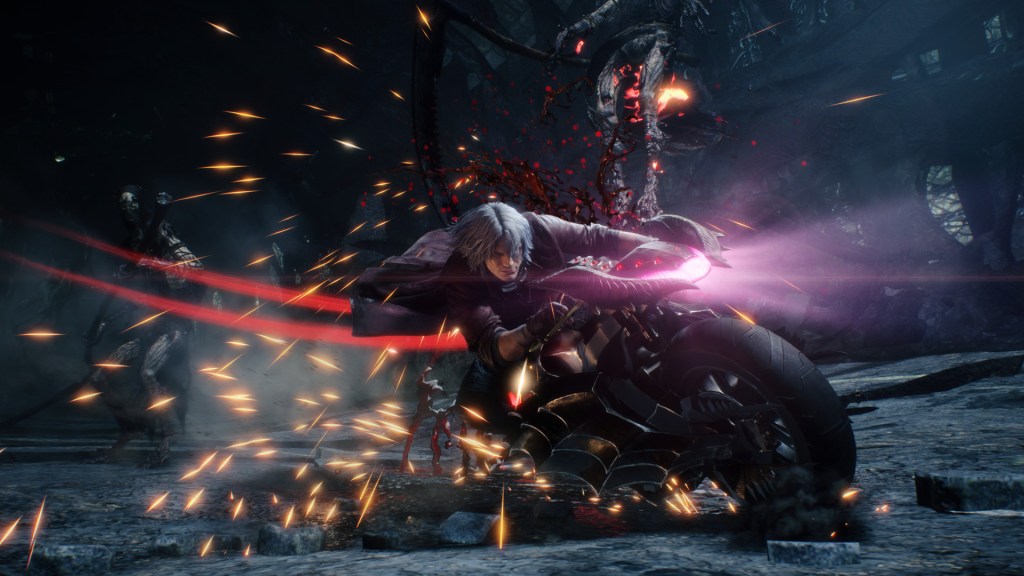 Even aside from the flashiness of the game, everything looks great. Devil May Cry 5’s characters are surprisingly life-like looking despite existing in such a other-worldly title. And as insane as the combat got, I never lost focus of my character. A responsive camera and clean visuals make it easy to keep track of everything.

Cutscenes can also be a lot of fun, featuring fight choreography that would make most Hollywood action movies jealous.

Many of the bosses are epic and creative encounters, featuring monsters that can destroy buildings or climb over them as you fight. These encounters are where Devil May Cry 5 gets the most creative. The pure scale is impressive.

And just like the playable characters, the bosses have a lot of pretty and over-the-top moves. It’s a lot of fun just to watch their attacks. 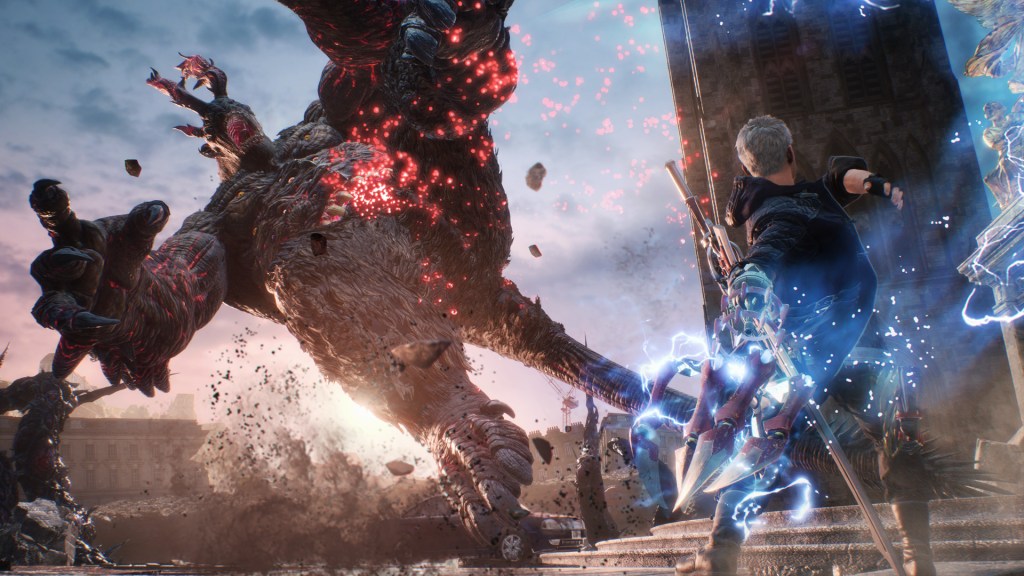 Above: All demons must die.

Devil May Cry 5 is most difficult at the beginning, when you’re only playing as Nero and trying to figure out things like his grapple hand. As you learn more skills and combos, and become more experienced, you’ll find yourself having an easier time.

This is normal for an action game, but switching between multiple characters make the pacing even weirder. I talked about how cool V’s combat looks, but his levels are too easy. V himself doesn’t need to be near combat since his spectral buddies can fight for him. He just needs to move into deal the killing blow on each enemy. But even then, he can teleport to any demon that’s on death’s door. After that, he can just slide right back out of combat and away from danger.

When playing as V, you can also just mash the X and Y buttons to make the raven and panther attack at the same time. As stupid as that sounds, it was effective. I would often get a SSS-style ranking during battles, the highest in the game, just by spamming those buttons and having V do his finishing blows. During boss fights as V, my hand began to cramp from all the mashing. 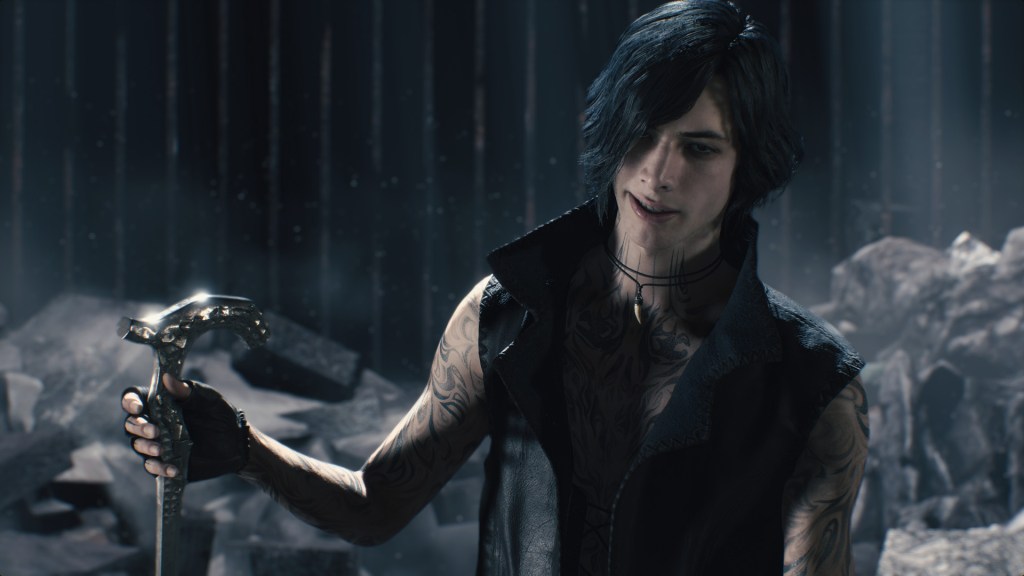 Above: Playing as V is visually impressive but too easy.

It becomes jarring when, after breezing through a few V levels, you have to play as Nero or Dante and actually worry about finding openings in your enemies’ patterns and doing combos.

The game also felt too easy on Devil Hunter, Devil May Cry 5’s normal difficulty. I only died during a few boss fights the entire game, and an overly-generous item called Gold Orbs can bring you back to life with full health even during the middle of a battle. You can buy these at an in-game shop, but you can also find plenty of them just running around levels. I always had more than five, sometimes ten, in my inventory. With that much insurance, I didn’t feel much tension during the game.

Devil May Cry has always had a “too cool for school” vibe. That can work if you’re actually cool, but Devil May Cry 5 is more often obnoxious. Characters make a lot of quips and jokes, but they just aren’t all that funny. Or they’re just lazy and obvious. When one of our heroes sees a weird monster, they’ll say something like, “I didn’t know it was Halloween.”

The tone works better with the music, which includes a heavy metal soundtrack that gets more intense as you’re your style ranking improves. That over-the-top tone works well during gameplay with the crazy fights and chest-bumping music. It doesn’t work as well when character open their mouths during cutscenes. 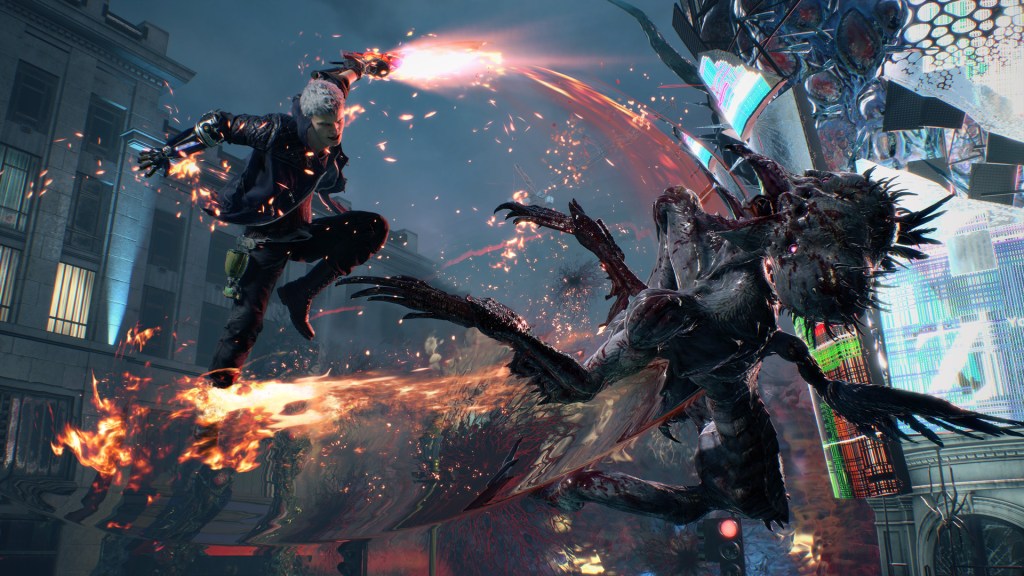 Devil May Cry 5’s combat can be fun and flashy, which is good, since you spend most of your time in the game fighting. But something is missing. For one thing, Devil May Cry 5 doesn’t really have any puzzles. Sure, you may find a locked door, but a key is never far away. Most of the time, it’s in the next room.

When all you have is fight after fight, it can get tiring. Devil May Cry 5 tries to remedy this by giving you a constant stream of new characters, abilities, and weapons to try out in combat. But none of it serves as a substitute for a better-paced, most challenging adventure.

Devil May Cry 5 won’t be a total disappointment thanks to its stunning production values. Aside from the recent Resident Evil 2 remake, this is the best-looking game Capcom has ever made. Its adventure is a fun one if you don’t take it too seriously (which shouldn’t be too hard). As much as I can gripe about its flaws, it’s hard not to grin when you’re shoving a running motorcycle wheel into a demon’s face. But this isn’t an action classic.

Devil May Cry 5 comes out on March 8 for PlayStation 4, Xbox One, and PC. Capcom gave us a code for Xbox One version for this review.