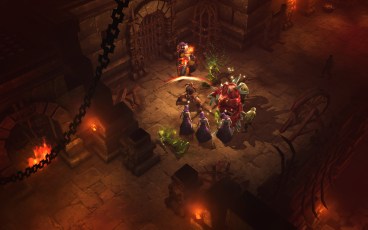 Blizzard Entertainment is known for taking its time before releasing a game. So far, the strategy has worked — while some of its games face delays, it has yet to deliver a game that has not been a smash hit. Starcraft 2: Wings of Liberty is expected to generate around $350 million and World of Warcraft has more than 11 million subscribers paying $15 each month to play the game. Diablo 3 was originally slated for a late 2011 release, but Morhaime said on the company’s most recent earnings call that the company wouldn’t commit to that release date.

“We commonly use the term “soon” when referring to Blizzard releases, because we know that no matter how hard we’re working to reach a target, we’re not going to compromise and launch a game before it’s ready,” Morhaime said. “While this news might not be a complete surprise, I know that many of you were hopeful that Diablo III would ship this year. We were too.”

Diablo 2, the last game in the series, was immensely popular when it came out more than a decade ago in 2000. Blizzard Entertainment only released one expansion pack for the game, but it came to define a lot of tropes that now commonly appear in online games — such as reliance on loot-seeking behavior and frictionless communication between friends and players. Diablo’s hack-and-slash and loot-seeking formula proved to be popular for more than a decade. It even inspired a number of dungeon crawler copycats like Torchlight.

Today’s announcement could put Diablo 3 and Star Wars: The Old Republic, Electronic Arts’ Hail Mary pass in the online gaming space, in a similar release window. Star Wars: The Old Republic is a subscription-based online role-playing game set in the Star Wars universe that is more like World of Warcraft than Diablo 3. But it might have to compete with Diablo 3 because it’s still a free-to-play online game that has an equally large fan base.

Blizzard Entertainment started the beta for the game, which takes place in the first level of the game, on Tuesday. Morhaime said the company would expand the beta and issue additional beta keys after it decided to delay the release of the game.