On New Year’s Eve in 1996, Blizzard Entertainment inaugurated the action role-playing game genre with the release of the first Diablo. It was a massive hit and a novel experience. Diablo combined the procedurally generated dungeons and loot of games like Rogue, Moria, and NetHack with top-quality production values, a gothic fantasy setting, multiplayer, and fast-paced, clicky-clicky combat.

But it was 2000’s Diablo II that solidified the subgenre’s form—most current Action RPGs* are direct responses to the popularity and acclaim of Diablo II.  D2 popularized four more major elements of the genre: an act structure, a competitive and cooperative online community, hardcore mode, and distinct character builds.

We’re using action-RPG here to mean games specifically descended from Diablo, as opposed to RPGs that have action-based combat, like Mass Effect or Skyrim. This isn’t an ideal distinction, but genre titles rarely are ideal.

From those two games (which is not to say that there weren’t other Action RPGs in that era, just that these cast by far the longest shadow), we have the core elements of the genre, which almost every game today possesses:

This is a surprisingly strong subgenre of games, with several excellent and varied recent installments. We took a close look at a few of them: Torchlight II, Diablo III, Path of Exile — and a broad look at several of the rest.

First up is the elephant in the room. 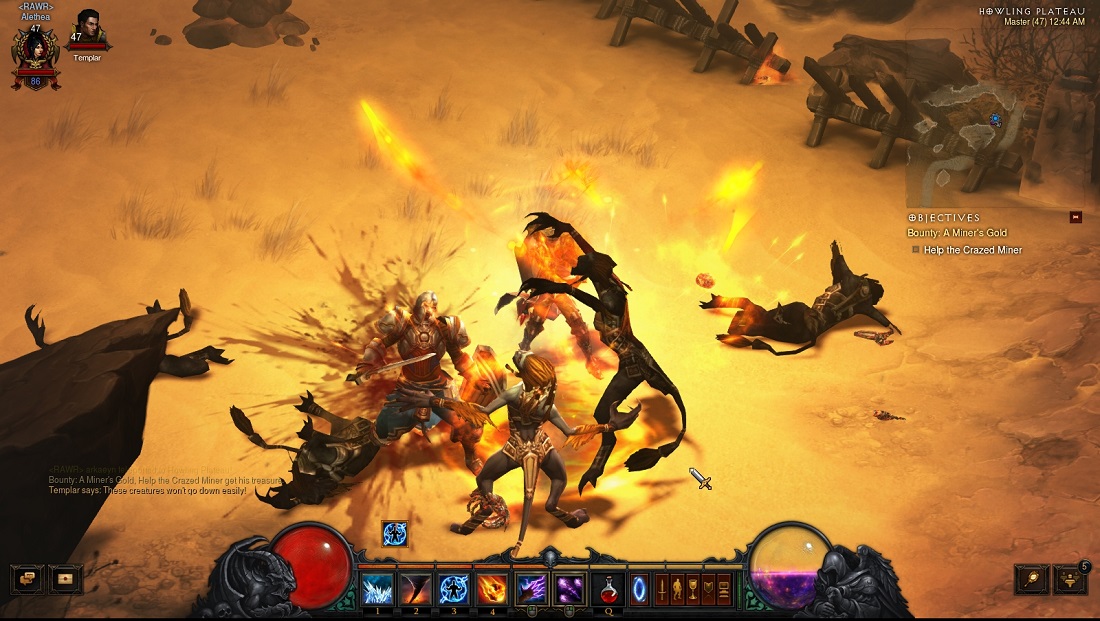 Above: Diablo 3 emphasizes the “action” in the action-RPG genre.

Diablo III’s initial problems were well documented: Server stability issues, an overbearing plot, poor loot progression, excessive difficulty, and the damnable auction house all served to give it a poor reputation. That was unfortunate for two reasons: first, a really good game was underneath the meta-game issues; and second, almost every patch since and the Reaper of Souls expansion have worked to eliminate DIII’s major problems.

Describing what actually worked about Diablo III presents some difficulty. It’s easy to look at meta-game systems like loot progression, but it’s much tougher to analyze what makes the individual animations of a shield bash superb. The sound and animation are all top-tier, with those Crusader Shield Bashes landing with satisfying thuds, while the Demon Hunter’s escape trick “vault” blurs across the screen with a nice little “whoosh.” As the game progresses, the situation onscreen becomes increasingly complicated with meteors falling, lightning hammers flying around, and bosses throwing up walls, but Diablo III always does just enough to feel comprehensible. The interface helps, too—all kinds of little things, like holding down the mouse button continuing to fire at the original enemy, even if it’s ported to the other side of the screen. Just fighting is incredibly satisfying. It’s also been ported to consoles and their controllers, to wildly successful reviews.

This is fortunate, because Diablo III has evolved into a game entirely focused on combat. The encounter design is effective for calling multiple groups of enemies together, turning fights into mobile, dynamic affairs, especially when multiple bosses get into place. The “Adventure Mode” added with Reaper of Souls, meanwhile, pushes the plot to the side and encourages consistent fighting. Finally, the controversial skill system, where every ability is available but only six can be used at once, works extremely well at allowing combat to be manageable even in chaos.

Those advantages come at a slight cost—Diablo III isn’t that good at creating a sense of character progression and history. You select whichever skills you feel like choosing, instead of building a powerhouse over time. Adventure Mode cuts out the repetitive story, but you just zap around the world with no sense of place. And the difficulty levels are player-centered—if you’re having a too-easy time, raise the level!—but that makes it tough to have a sense of accomplishment at getting to the next difficulty level, as the series used have.

If you want to focus on the “action” side of the genre, Diablo III is almost impossible to beat. But for a more satisfying, progress-centered take, Torchlight II is worth a look. …